“He is Risen!”, they shouted in an authentic southern accent with mocking glee. This was Easter Sunday in the thick of Kentucky during one lull between songs at the second Blood of the Wolf festival. The crowd celebrated the fact that it was, in fact, Easter sunday and the whole weekend was centered around macabre imagery of rising dead. What I am surprised about in this anecdote was not the fact that it happened but how little it happened over the course of Good Friday to the holiest of Sundays. In fact, the whole festival, which drew bands and fans from the midwest and eastern coast of the US, appeared to be more grateful than blasphemous. How can you really be spiteful when you have three days of gorgeous weather, a craft beer garden, and a host of raw, unyielding death metal bands? 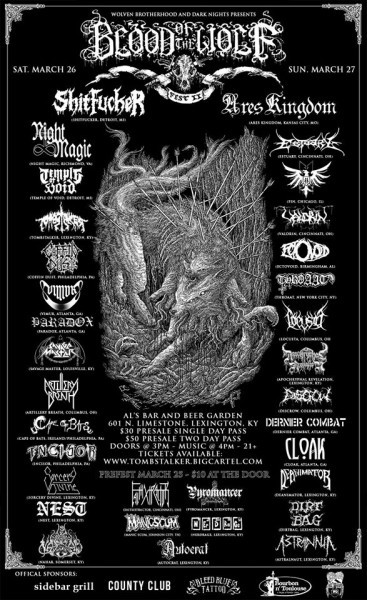 In the patchwork city of Lexington, hip brewpubs occupied the same block as abandoned housing projects, while arcade bars lie across the block from sparse corner markets. The whole area was caught between the funky coffee shops with painted ceilings and the beer bottles that made piles alongside of untrimmed hedges. The northern area of Lexington seems to be two vastly different neighborhoods, separated by time, but now overlapping in strange harmony. A place where nerves would tense and release like rollercoasters walking down a short stretch of road. To add to this array of weirdness, crowds of metal heads made congregations in the space between Al’s Bar and the Sidecar on Easter Sunday. 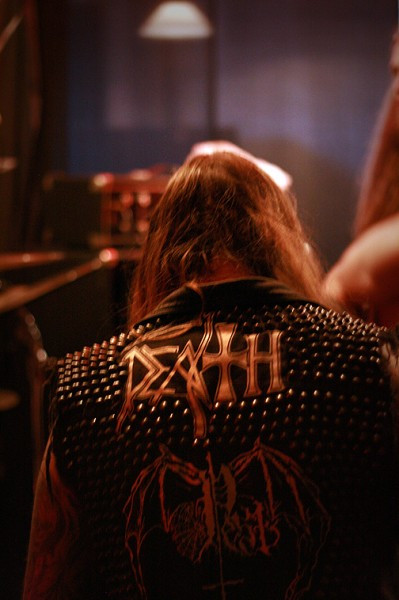 Al’s Bar and the adjoining Sidecar venue / beer garden were perhaps the perfect place to host this small festival. Situated between a small local tavern with cheap beer and rail drinks to the more upscale beer garden that looks like it was built the week before, the space was accommodating for 300-plus metal fans to wander aimlessly while smoking cigarettes and drinking pitchers of beer. Al’s Bar also served decent food, including various versions of stew/gumbo that soon provided every band member the sustenance to combat the inevitable hangover. These stew plates were cheap and soon seen in numbers as if Al’s had turned into a prison serving above-average gruel. 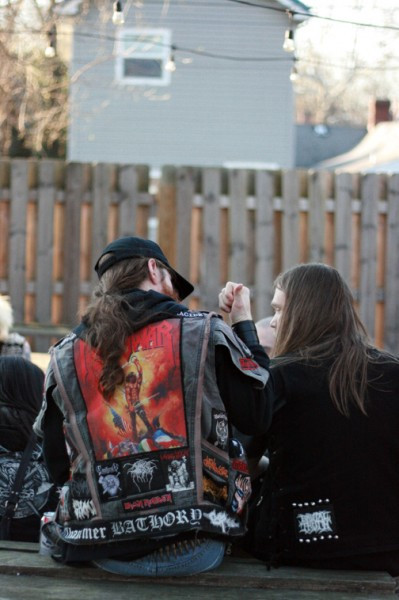 If one were to draw a map of related bands by membership and acquaintance, the roster for Blood of the Wolf would be a spiderweb. It wasn’t until following Tombstalker from a side event at Maryland Deathfest last year that I discovered this interconnected trove of midwest heavy metal that was fueled with as much generosity as it was dark energy. Tombstalker was acting as the ringleader for this event, with the term “Wolven brotherhood” appearing to be loosely connected to the grouping of bands and, whether or not used in jest, does signify a connection between the majority of fans and bands in attendance.

Similar to Shadow Woods, the scope of Blood of the Wolf Fest was local to regional. With Ares Kingdom, Tombstalker, and Shitfucker as the festival headliners, the range of bands would be from marginally popular to completely underground. Part of the fun of these festivals is going in with little-to-no knowledge of the bands you are seeing and having expectations shattered when they blow your mind. Even at its lowest points, the most unexciting bands on this bill are probably the most interesting anywhere else. Blood of the Wolf was a chance to experience new and exciting heavy metal bands who have a chance to be legends some day in the future. Not all the bands will reach this pinnacle, but for now they seem to be having the time of their lives.

I am not wondering whether the guy in front of me is vomiting on the floor. It is certain that he is. His back is contracted and the floor in front of me is getting more slick with each heave of beer and whatever food was served at the bar. What I am wondering is whether or not he is doing it on purpose as some sort of celebration for Shitfucker, who are currently playing.

I do not want to use this anecdote as a way to paint the scene as ghastly disregard for the venue, rather I feel this is the only time where the melange of bile, beer, piss, and sweat on the floor is sort of fitting for the gross combination of black, thrash, punk, and speed from the band. Shitfucker doesn’t have many full-lengths, but rather a bunch of splits, demos, and a whole lots of style. Currently signed to Hells Headbangers, this Detroit-based horror show carries an air of style as their connection with the audience and a real-life entourage of colorful characters that make them a walking spectacle. There is a girl swishing her feet on the slick floor. I need to step outside.

Coffin Dust are from Philadelphia and I wanted to include them in this review in conjunction with SF because of their energy, at least in terms of crowds. From their Bandcamp, Coffin Dust is a pretty decent and upbeat old school death metal throwback with as much groove as harsh tonality. What the music doesn’t convey is the infantry of 30 fans ripping holes in the floor of a small room with little to no light. The deep rooted melodies herald in the stiff muscled madmen who make a wall of bodies mimicking the wall of death metal coming from the stage.

Even if one is neutral on the stance of death metal, having a small mob of people throwing themselves at you while others beat the backs of friends propping themselves up on the small risers for support is a sight to see, and if one would ever travel in the dark areas of Philadelphia, where skeletons walk, they could possibly see the same thing.

Pyromancer was a side-project for Tombstalker / Apocryphal Revelation, with the drummer and vocalist for both bands assuming flavorful pseudonyms and bowing down to the altar of bestial black/death worship. When I say worship, I mean this band took delicate measures in recreating the same mythos and aesthetics as bands like Blasphemy, Black Witchery, and Revenge. What Pyromancer does differently however is eschew the template of fully chaotic noise for a harsh variety of music that is still held down by anchors of grooves. Perhaps more so live, Pyromancer is incapable of making formless noise and their two members channelled their aggression into making black/death fun and entertaining while hidden under a heavy aesthetic.

Pyromancer constructed a small altar for their show, which the Atlanta-based band Cloak also did. I think there were other altars constructed throughout the weekend, but both of them stuck out as working so much better in terms of ambiance.

Cloak has one demo thus far and it is enough to cause tension with impatience for a full album. Somewhere between the mid-tempo swagger of rock and roll and the harsh vocals of black metal stands Cloak. I chose to write about this band because they seem to be a unit held together by an ominous style and aura. Where the combination of gothic black rock has sent various bands into novelty territory, Cloak was so unassuming with its style that the sound electrified the small room. This was black metal slowed down to a second gear, and the confidence of its band members, with their fashion of high boots and leather vests, made the experience so much more believable.

I wish I could have the time to write about every band I saw, because in all honesty, the quality for Blood of the Wolf far surpassed its ticket price. Already the festival organizers have green-lit the third installment for this festival, which means that in a year’s time, I am headed down to the land of cement and grass. Blood of the Wolf was something special and has enough charm to carry it into the future as a great conduit for the midwest heavy metal scene. 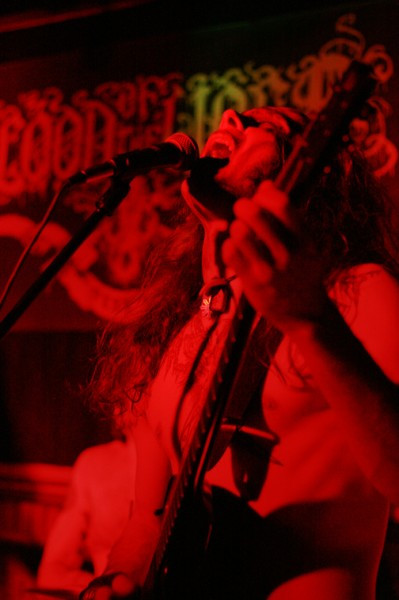 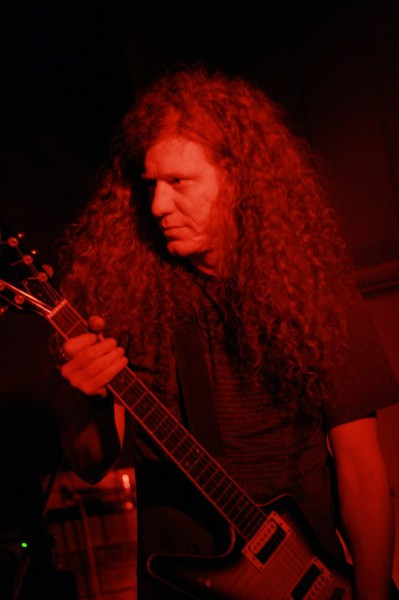 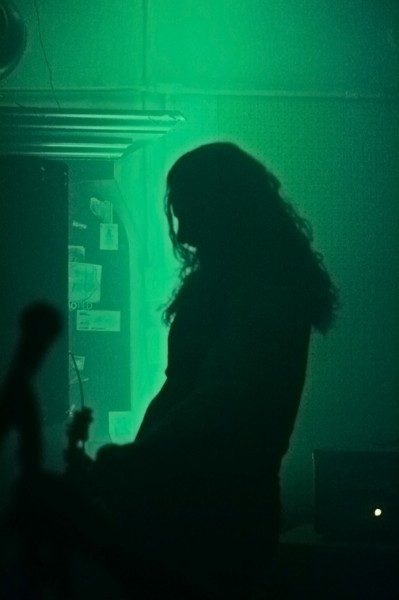 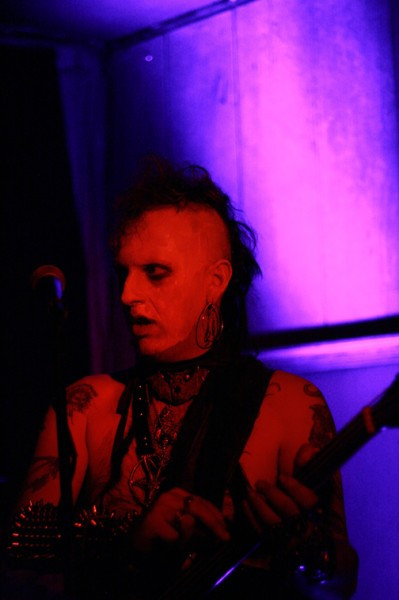 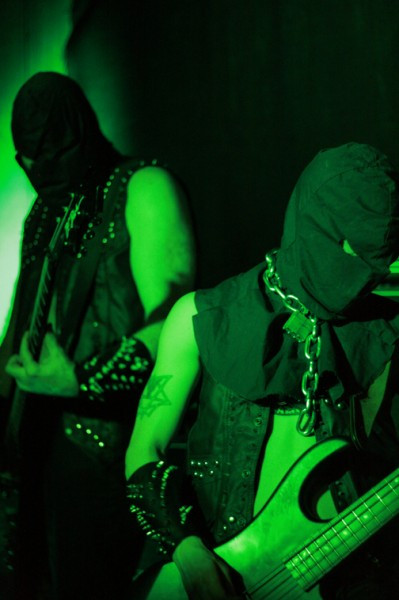 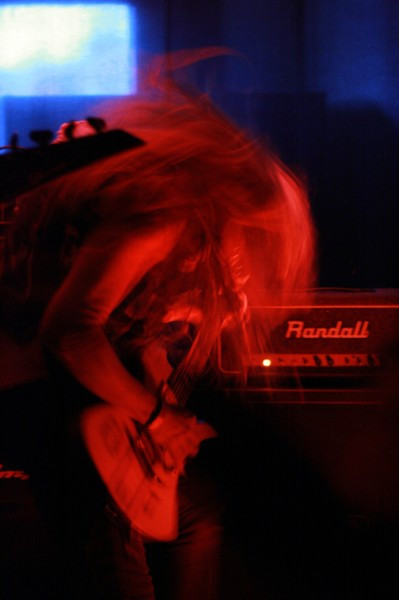 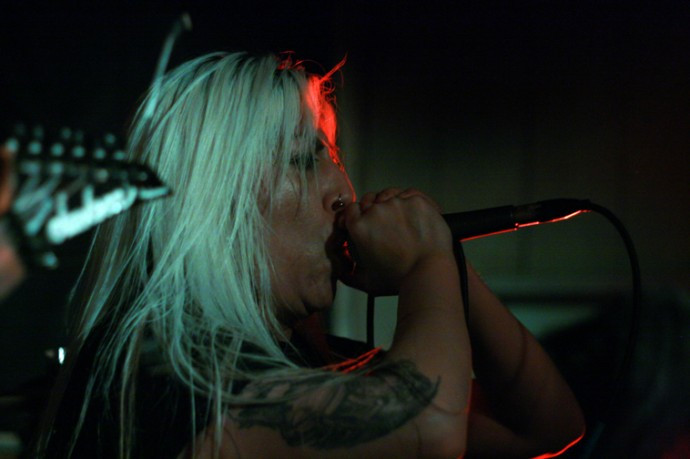 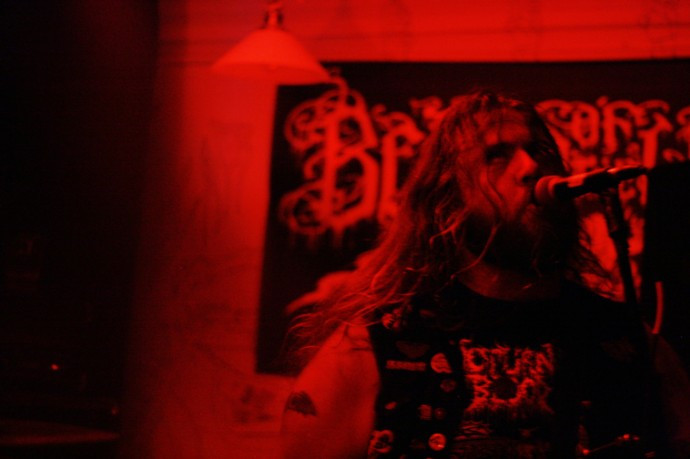 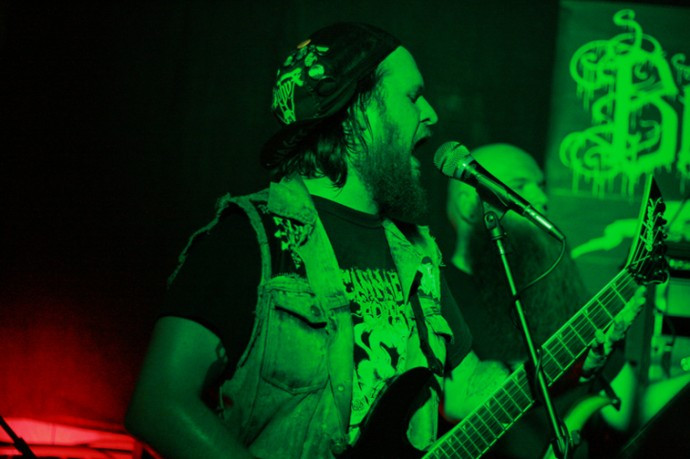 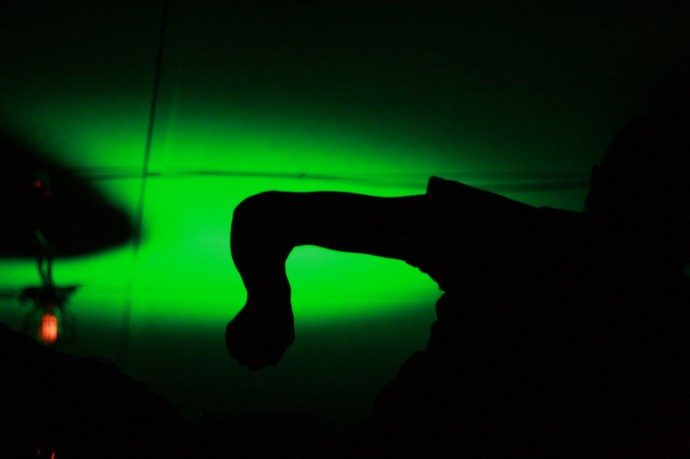 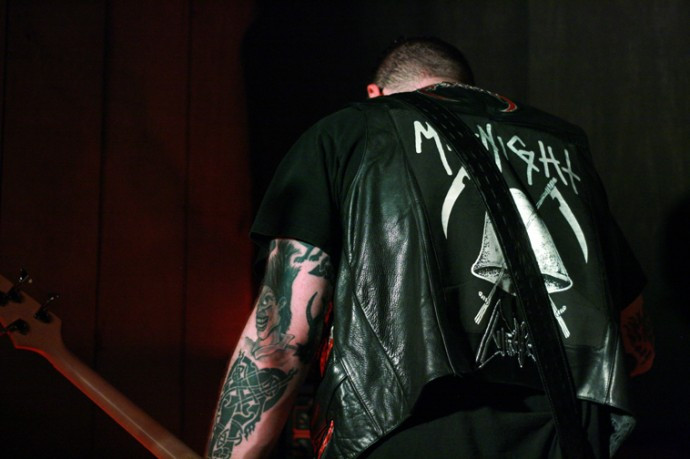 4 Responses to “DEATH & DISMAY: THREE DAYS AT BLOOD OF THE WOLF”