Rebaelliun are a band of Brazilian death metal marauders whose roots can be traced back to 1998. In 1999 the Dutch label Hammerheart Records released the band’s debut album, Burn the Promised Land, and then also released their second album Annihilation in 2001. Both albums made a big and lasting impact in the underground, but after touring in support of Annihilation the band broke up.

But now Rebaelliun have reunited, and they have again joined forces with Hammerheart Records to release their third album, The Hell’s Decrees. Although the release date for the album doesn’t arrive until May 5, we are privileged to bring you a full stream of the album today.

Our good friend from The Dominican Republic, Vonlughlio (Blast Family and Reign of Death) has been a Rebaelliun fan for many years, and has been as excited as anyone about the band’s reunion and the release of this new album. And so before the album stream, we bring you his thoughts about the music: 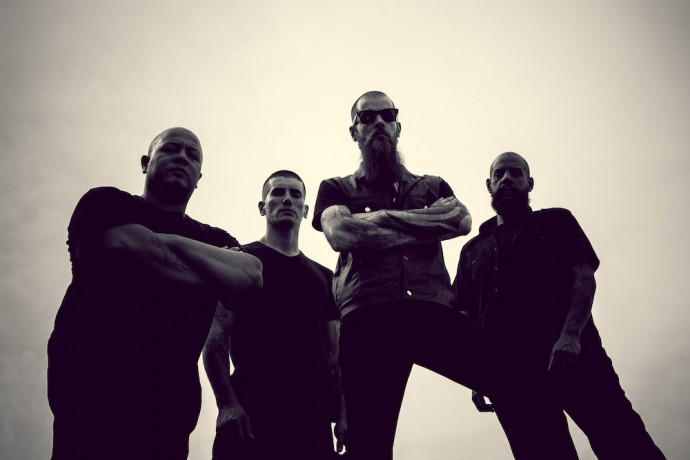 First of all I would like to thank Islander for letting me review Rebaelliun’s new album The Hell’s Decrees. Their albums Burn The Promised Land and Annihilation are Death Metal classics. Both records, first-press CDs, were stolen from me many years ago (no worries, the person responsible got their due).

After their second album was released in 2001 they disbanded, and as the years passed many have wished they would make a comeback. So you can imagine the level of excitement when they announced back in 2015 that they had reunited and begun working on new material. I must admit I was anxious and somewhat nervous, because it had been so long since they released new material. But once they released their video for the song “Legion” I was relieved and optimistic that they hadn’t done an “Illud” on us fans. Then again, my level of anxiety was at its highest point, waiting and waiting until I could get to listen to the full album.

I am happy to say that after my first listen all worries were shattered with no mercy. What an album!!!! It’s like they froze in time — all the elements that made them so great are still here: Insane speed with perfect precision, brutal delivery, and fantastic guitar solos.

The album clocks in at just above the 30 minutes, making it their shortest in length, but rest assured — it does not diminish in any way the ferocity of this release. Each of the songs is structured in a way that shines with a different light of its own. Another aspect to take into consideration is that the production is better than on their previous releases. In my opinion it adds more to the intensity.

Mr. Fabiano (Vocals, Bass) does an excellent job in both departments; I have always liked his delivery and his ability to transmit rage and anger, and he is still ferocious. Mr. Moreira (Drums) is a machine behind the kit; he is an excellent musician, and his versatility shows in his playing on the album. Now on guitars, Mr. Penna and Mr. Lima bring so many great riffs that are one of the main reasons why each of the songs has a life of its own. And their solos are simply mesmerizing. They were before, and still are, one of the trademarks of Rebaelliun.

I’m not afraid to say that this is one of the best Death Metal releases of 2016!!!!!!. In the genre they are Brazil’s finest, and no one can come close to what they have achieved. I just hope they don’t wait another 16 years to release new music.

As mentioned, The Hell’s Decrees will be released by Hammerheart Records on May 5. And for those who are just discovering Rebaelliun or want to revisit past glories, Hammerheart has also made both of the band’s first two albums, plus their 1999 EP At War, available on Bandcamp — HERE — or on CD or vinyl at THIS LOCATION.

Now enjoy the full album stream of The Hell’s Decrees (and below that you can also check out the official lyrics video for “Legend”).

12 Responses to “AN NCS PREMIERE (AND A REVIEW): REBAELLIUN — “THE HELL’S DECREES””