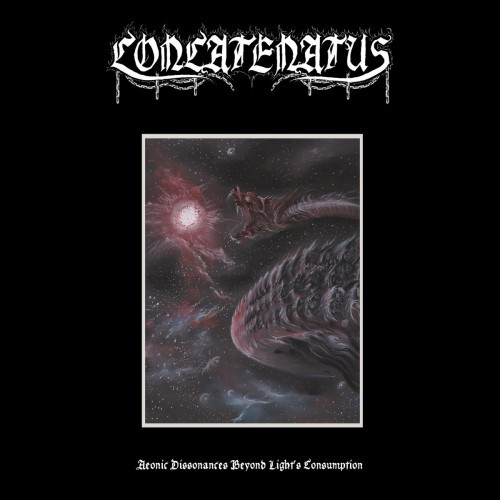 I was drawn to this debut release by the eye-catching cover art of the Chilean artist Daniel Hermosilla (Nox Fragor Art), which I posted on our FB page not long ago (where it received an enthusiastic response).

The two musical artists (Sulphur and Balrog) who have taken the name Concatenatus are also from Chile, and their first EP, Aeonic Dissonances Beyond Light’s Consumption, was released via Bandcamp on April 5 (tape, CD, and vinyl editions will be forthcoming from Totenmusik and Ván Records). 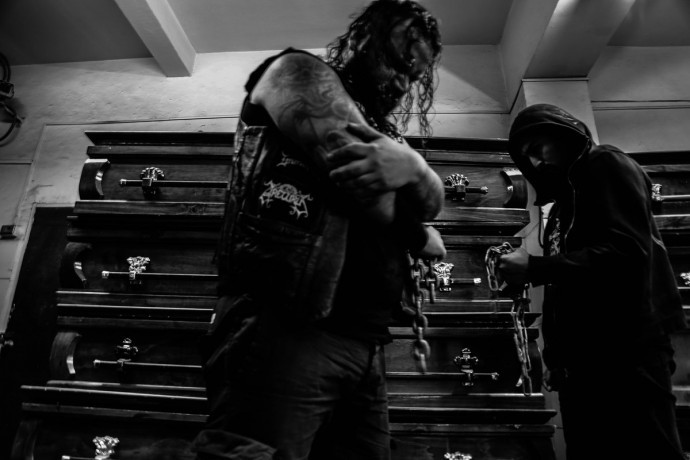 The EP consists of two long tracks, “Aeons” and “Hodie Mihi, Cras Tibi”, plus a shorter interlude between them named “Barren Knowledge”.

With a bit of googling, I learned that “Hodie Mihi, Cras Tibi” is a Latin epitaph found on medieval tombstones, which translates to “my lot today, yours tomorrow”, and the music does indeed seem to emanate from the grave.

It begins with a slow, rocking beat and another grim, funereal guitar melody, paving the way for the band to push the tempo while lashing the listener with tremolo chords and a thundering bass-and-drum storm. As before, the shrieked vocals are truly flesh-scalding in their intensity.

In the song’s mid-section, the music becomes disorienting and hallucinatory, the heavily distorted guitar spinning out a demented tracery of dissonance while low chants mix with cauterizing yells and shrieks — and then the music becomes a conflagration of black sound, until the band return to that slow, rocking rhythm and doomed melody with which they started. And if you’re not disturbed enough by this point, the sample at the end will finish the job.

Aeons… is powerful stuff, a thoroughly doom-cloaked, dissonant hybrid of death and black metal with an occult, esoteric atmosphere. It beckons from the abyss, and its call is so compelling that you will willingly follow.