The same person who put me in mind of Summoning for last Sunday’s Rearview Mirror installment is responsible for this week’s choice as well. But while I was already a fan of Summoning before being reminded of their great Stronghold album last week, this week’s suggestion — Mörk Gryning — was a new name to me.

After listening to the album that I’m featuring today, I began to do a little research and soon discovered that the German label Eisenwald re-released this very album on CD in January as the first part of a series of Mørk Gryning reissues, and so I’m going to quote Eisenwald’s own introduction to the band: 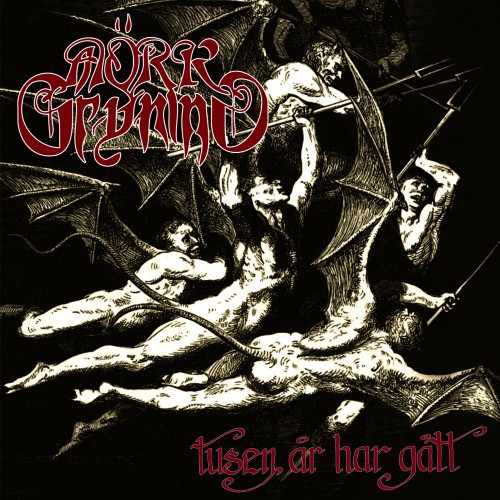 Mörk Gryning (Swedish for “dark dawn”) arose during the year 1993 and both founding members Draakh Kimera and Goth Gorgon started out to create their mystical brand of black metal. After 2 demos in ’93 and ’94, they signed with the infamous Swedish extreme metal label NO FASHION RECORDS (Marduk, Dark Funeral, Dissection, Katatonia, Opthalamia…).

During May 1995 the duo (both members beeing only 16 & 19 years) entered the Unisound studios together with Dan Swanö to record their debut album “Tusen år har gått”; a nine track theme album about the story of Nidas, Eldon, Erin, and Cahn. It included lyrics in Swedish and English and managed to create a beautiful classic from the early days of the Scandinavian Black Metal.

High-density 33 minutes of raging, cold black metal with a brilliant earworm quality. Underlined by decent keyboards that never stand too much in the foreground, but fit organically into the overall sound, like many other debut albums, the specific and special atmosphere of this early work helped to make something lasting. Looking back today, Jonas Berndt (Goth Gorgon) adds, “I’ve listened through the album and I’m proud that it sounds so fresh and honest still today. It’s great songs with nothing superfluous to it”.

You can learn more about this reissue, which comes with a 16-page booklet and two additional tracks that did not appear on the original release, at this location. I’ll add that Eisenwald also plans to re-release the band’s second album Return Fire on CD, and that vinyl releases for both albums are also planned.

I’ll further add that Eisenwald has made the album available for streaming (but not download) on Bandcamp as well, where orders can be placed for the CD edition:

But this post really wasn’t intended as an advertisement for Eisenwald — the discovery of their reissue came only after I had listened to the album on YouTube last week and become enthralled by it. The fact that it was created in 1995 by a couple of teenagers blows my mind. Thanks to Dan Swanö, it still sounds amazing.

Mörk Gryning went on to record four more albums after this debut, the last of which was a self-titled one in 2005, and then the band split up. However, Mörk Gryning have reunited for an exclusive one-off performance at the Party San festival in Germany on August 11, 2016. And if you would like to learn more about how the band’s music evolved after the record featured below, I’d recommend this article at DECIBEL, which I also discovered in my researches.