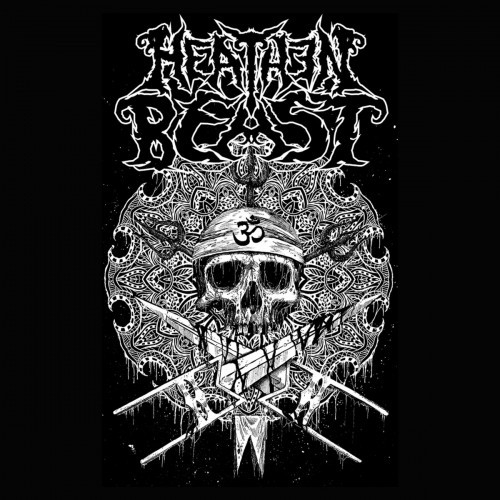 Time flies. Almost four years have passed since I last wrote (here) about the politically outspoken Indian black metal band Heathen Beast, in a post titled “Heathen Beast’s Videos Do Not Fuck Around — And Neither Does Their Music“. The same could still be said today, despite the passage of years — as you will see and hear in our premiere of the band’s new song and lyric video: “The Systematic Annihilation of Islam“.

The song is one of three that appear on the band’s new EP, Rise of the Saffron Empire, which will be released on April 25 by Transcending Obscurity India (CD and digitally).

You can appreciate the music even if you’re uneducated about the subject matter of the video (as I originally was). But I think some background information might be useful — and to begin, I’m going to repeat some of what I wrote in that post from nearly four years ago: 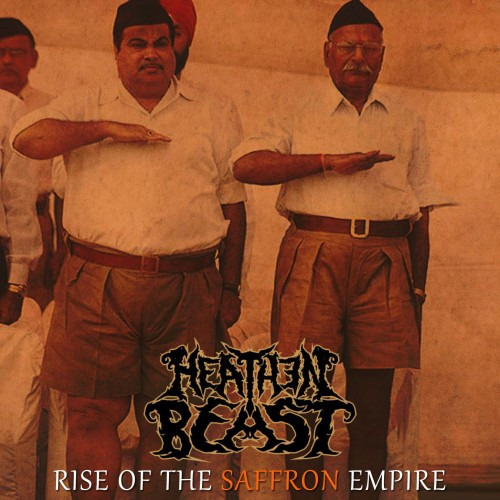 Heathen Beast don’t like what they see. They are an Indian black metal band based in Mumbai whose focus is on religion, which they view as a destructive plague on mankind. This alone doesn’t necessarily distinguish them from black metal bands the world over, but they have a particular focus on religion in India, which means that the object of their anger and scorn is not Christianity (as it is for BM bands in so many other countries), but the influence of more locally important religions such as Hinduism and Islam and what they perceive as the destructive effect of those faiths on the people, the environment, and even the animals of their country.

The latest object of their derision and wrath is the anti-Muslim rabble-rousing of Hindu nationalists in India — including India’s current prime minister, Narenda Modi, who has been in power since May 2014. He is a Hindu nationalist who, according to this extensive Wikipedia article, “remains a controversial figure domestically and internationally”. Much of that controversy seems to stem from acts of violent rioting and “ethnic cleansing” directed against the minority Muslim population in the western Indian state of Gujarat in 2012 when Modi was the Chief Minister of the state. Again to borrow from Wikipedia:

According to official figures, the riots resulted in the deaths of 790 Muslims and 254 Hindus; 2,500 people were injured non-fatally, and 223 more were reported missing. Other sources estimate that up to 2,500 Muslims died. There were instances of rape, children being burned alive, and widespread looting and destruction of property. The Chief Minister at that time, Narendra Modi, has been accused of initiating and condoning the violence, as have police and government officials who allegedly directed the rioters and gave lists of Muslim-owned properties to them.

Although Modi was officially cleared of complicity in the violence, many people continue to believe that he has blood on his hands.

But, as you will see in the video, Heathen Beast’s objective here is not to champion the cause of Muslim rights but to spotlight one more example of the destructive effects of religion of all kinds in their nation (and around the world, for that matter).

I said that you don’t need to know this information in order to enjoy the music. It’s a black metal conflagration of ripping riffs, blazing percussion, and searing shrieks — with a dark melody accented with hand drums and a booming bass line. It’s full of raging fury, but it’s a dynamic and very catchy song as well.

The title track from the new EP has previously premiered, and you can watch the video for that one (and listen to it via Bandcamp) after the video for “The Systematic Annihilation of Islam”. The EP can be ordered here:

4 Responses to “AN NCS PREMIERE: HEATHEN BEAST — “THE SYSTEMATIC ANNIHILATION OF ISLAM””