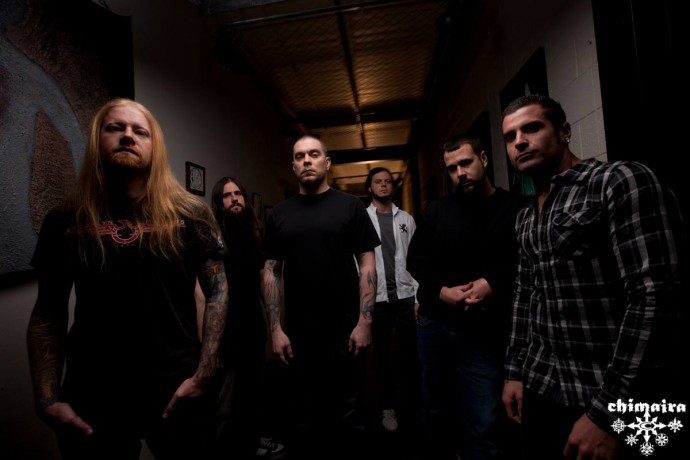 (Every now and then Andy Synn shares with us lists of favorite things that come in fives, and this is another one, though he stretched the number a bit this time.)

You may have noticed that my usual output has decreased somewhat over the last week or so. There’s no need to worry, it’s just been a combination of work/band/personal commitments all coming at the same time, requiring me to shift my priorities around a bit, meaning that NCS has had to take a bit of a backseat for a moment.

That should be coming to an end very soon, however, and I have a bunch of different reviews and columns lined up for May that I think you’ll all really enjoy.

In the meantime, however, since I’m still a little pushed for time and opportunity to write, I’ve dashed off this little piece in tribute to a band I’ll always have a soft spot for.

Amongst their many peers and compatriots in the loosely-defined “NWOAHM” movement of the early/mid 2000s, Cleveland crushers Chimaira always seemed like the red-headed black-sheep of the family.

Starting off as something of an awkward mix of the burgeoning Metalcore sound and the heavier end of the angst-ridden Nu Metal scene, before quickly transitioning towards an all-round thrashier, chunkier style (eventually culminating in a sound that frequently bordered on Death Metal in its rumbling, gut-wrenching intensity), the band were plagued by line-up changes and a slightly inconsistent sense of identity over the years, which unfortunately led to them falling behind the rest of the pack commercially (and, at times, creatively), before their final dissolution in 2014.

That being said, over the course of their 16-year/7-album existence they undeniably produced some absolutely killer tracks, with the song-writing duo of vocalist/band-linchpin Mark Hunter and woefully underrated guitarist Rob Arnold in particular bearing the lion’s share of the responsibility for the band’s very best compositions.

So, without further ado, here’s five of my favourite tracks put out by the amorphous, many-headed musical entity once known as Chimaira…

Largely held up to be the band’s best album (something which, I must admit, is pretty hard to argue against), Resurrection might as well be considered the band’s “re-debut”, as not only does it feature the reestablishment of the group’s “definitive” line-up (with under-appreciated uber-drummer Andols Herrick returning to the fold), but it also showcases a band hungrier, heavier, angrier, and smarter than ever before.

Packed full of punishing riffs and neck-snapping rhythms, there’s very little on Resurrection that qualifies as filler, making it difficult to narrow it down to just one selection, but for its sheer heft and Death/Thrash levels of intensity (as well as its plethora of sickeningly effective hooks), I had to go with “Worthless”.

A lot of people felt like Chimaira failed to capitalise on the success of Resurrection when they followed it up with the slower, denser, and less immediate auditory assault of The Infection, and I’ll acknowledge that it’s much more of a “grower” of an album, as well as the fact that it probably could have done with one or two faster tracks to break up the overall slower dynamic of the album (which tends to stick to an almost Obituary-esque chug and churn for most of its 54-minute run-time).

However, this is the album where you can really feel the band’s Death Metal influences coming to the fore, which helps make it potentially my favourite (or at least joint-favourite) album out of all the band’s back-catalogue, and opening track “The Venom Inside” is most definitely one of my favourite songs that the group ever produced, possessing a truly soaring lead-guitar refrain, a bruising verse riff that could even teach Gojira a thing or two, and a chorus packing enough electrifying power to light an entire city block.

IMPENDING DOOM (FROM THE INFECTION, 2009)

Considering how much I actually do love this album, I couldn’t leave it at just one song, and although I sincerely considered the heaving menace of “The Disappearing Sun” (which is also one of the band’s best tracks), in the end I had to go with the unconventional, atmospheric strains of “Impending Doom”, which manages the clever trick of being both thoroughly eerie and yet incredibly catchy at the same time, building to a second half that seizes you by the short hairs and demands, in a very loud voice, that you headbang yourself insensible.

2011’s The Age of Hell definitely seemed like it was trying to replicate the success, and sound, of Resurrection, but overall didn’t quite match-up to its predecessor in terms of the ratio of killer to filler. Still, it managed to deliver plenty of thrills, chills, and kills of its own, with the savage title-track and the devastating “Born in Blood” both vying with the utterly monstrous grooves of “Trigger Finger” and the humongous heaviness (and subtle proggy touches) of “Scapegoat” for inclusion on this list.

In the end though, as Christopher Lambert once said, there can be only one, and that just had to be “The Year of the Snake”, as it’s such a perfect distillation of the band’s singular blend of focussed, yet surprisingly multifaceted, musical brutality.

Chimaira’s final album almost didn’t exist, such were the tortured circumstances around its creation and release, with stalwart vocalist Mark Hunter the only original member remaining after a mass exodus left the future of the band in very real jeopardy.

What’s really surprising, however, is not just that the album actually got made in the end, but that it definitely ranks amongst the group’s strongest albums, with tracks like the ravenous opening pair of “The Machine” and “No Mercy”, the hard-driving, unflinchingly venomous “Plastic Wonderland”, the bolt-gun brutality of “Spineless” and the spiteful, contempt-fuelled “Wrapped in Violence” ranking among some of the heaviest, hookiest, and downright nastiest songs ever put out under the Chimaira banner.

My personal favourite of the bunch though has to be the title-track, which matches a surprisingly melodic (and surprisingly dark) undercurrent to some truly fantastic drum work (courtesy of new sticksman Austin D’Amond) and a sense of utterly devastating, practically weaponised groove.

Ok, so originally this was meant to be only “five of my favourite” songs… but there was just no way I could leave this one out. Essentially it’s Chimaira’s equivalent of “The Thing That Should Not Be”, an almost ten-minute epic of haunting lead melodies, monumental riffs, and razor-sharp, skyscraping hooks, all delivered with an unwavering sense of pure conviction and unshakeable resolve.

It’s also easily the most ambitious and creative composition the band ever put together, and they absolutely nail every stunning second of it.

5 Responses to “FIVE [SIX] OF MY FAVOURITE… CHIMAIRA SONGS”