(We present the second part of a three-part review by Andy Synn of the new triple album by the Swiss phenomenon Schammasch. Part One is here; Part Three arrives tomorrow.)

As it was written, so let it be done… I said I was going to write this review in three parts, echoing the construction of its subject matter, and with the publication of Part I yesterday it seems I’m now committed to this three-part treatise on the esoteric wonders of Triangle.

Now, as much as I foresee a certain amount of wailing and wringing of hands about it, the triple-album format of this release really does give the band a chance to fully indulge their more atmospheric ambitions and progressive proclivities while still retaining a sense of continuity and over-arching identity across each separate segment.

Apropos of this, with Part II you can really feel the doomier, proggier side of the band coming through, although this neither downplays the doomy touches already making themselves known during Part I, nor the blackened bite that many of the songs on Part II still possess. It’s simply an acknowledgement that for Schammasch this is yet another step onwards down a path of their own choice and making. 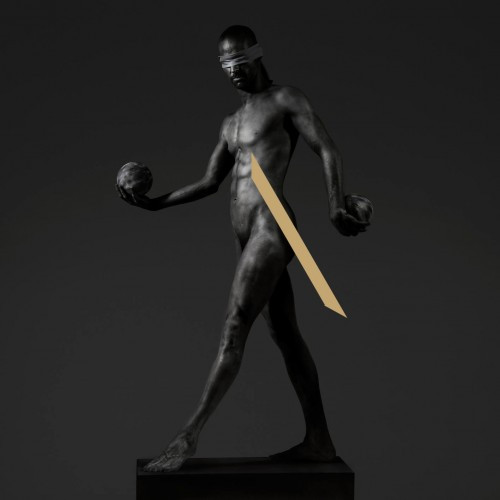 The funereal pace and tom-heavy drumming of “The World Destroyed By Water” immediately help differentiate Part II: Metaflesh from its predecessor, laying the groundwork for a procession of foreboding melodic guitar work and croaking, semi-clean vocals that spiral and cycle in mesmerising, ritualistic fashion, building to an unexpected display of shiver-inducing blasts and textured tremolo guitar work, before the track climaxes in an unsettlingly atmospheric synth-scape denouement.

“Satori” is also something of a slow-burner, thought its opening minutes certainly have a heavier, more doomily metallic feel than its predecessor did, all dense, brooding chords and almost tribal drumming patterns that eventually culminate in an eruption of whirling blast-beats and creepily compelling melodic dissonance, before the track shifts its shape once again into its drawn-out finale of weaving, hypnotic instrumentation and droning, hymnal vocal intonations.

The desolate clean vocals and eerie melodies of “Metanoia” are carried along by a seething stream of blasting drums, juxtaposing meditative solemnity with pulsating power in a seamless synthesis of what should be totally opposing forces. And it’s this ability to balance and reconcile such potentially antithetical approaches which gives Part II of Triangle its true magic, with “Metanoia” finally culminating in one of the most captivating and atmospheric sections the band have ever captured on tape.

By the time you reach “Above the Stars of God” you should have come to a much deeper understanding of what Schammasch are trying to express here. The drifting, void-like ambience and Pink Floyd-tinged lead guitars of the track immediately set out to free your soul from its earthly constraints, and it’s almost three minutes before the more metallic side of the band makes itself known, transforming the track into a grandiose, gloom-laden procession of thrumming, doomy riffs and gravelly, mantra-like vocals quite unlike anything the band have attempted before.

That they not only pull it off with aplomb, but also integrate it flawlessly into the fabric of their steadily evolving sound, is a tribute to the band’s creative and compositional abilities, abilities which situate them now at a nexus point between Black Metal, Doom, Prog… as well as a host of other styles… where they dwell in isolation and ruminate upon the nature of existence.

As the sorrowful strains of gorgeous acoustic finale “Conclusion” bring this part of Triangle to its close it becomes clear that the paradigm has truly been shifted, and that the sound of Schammasch is no longer what it once was. It’s now something more. Something greater, and yet harder to define.

And though Part III is still yet to reveal its secrets, it seems prudent to expect that the greatest changes are still to come.

Triangle will be released by Prosthetic Records on April 29.