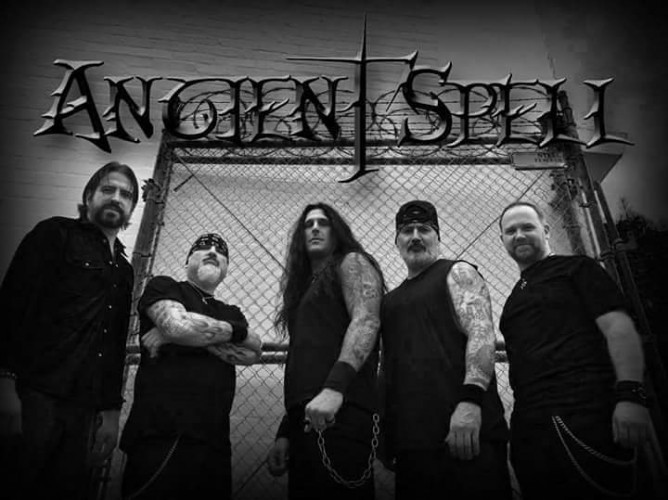 Occasionally I’ve sent questions to the band, and at the same time received answers from both Conrad Viz and Donnie Marhefka, Ancient Spell’s frontman, so in the end I have two interviews with quite similar questions but with different answers. Here’s the interview with Conrad, you’ll be able to find our interview with Donnie a little bit later (during this or next week) on doom-metal.com. Enjoy the Ancient Spell.

Hail Conrad! Let me start with a trivial question about Ancient Spell’s history — how did you create the band?

I created the band because I was looking to start something that went back to my roots, which is the Heavy Rock/Doom music that is my #1 passion. I had been playing in other types of bands like Blues Rock and Latin Rock for a while. So I put out an ad that said looking for musicians to start a new old school kind of band with Heavy influence ala Black Sabbath, but with a bit of a newer vibe to it. Like Black Label Society mixed with Slayer and Death maybe.

The main feature of Ancient Spell is the mix of genres you have chosen to follow – traditional doom, thrash, and heavy metal. Someone would say that it is a strange combination, what is your point of view?

Well, I am influenced by all types of Metal and many different kinds of music also, not just Metal. The first offering of Ancient Spell was just a power trio that had a classic Heavy Rock/Doom style. Then I wanted to add a second Guitarist to fatten up the sound and a Lead Vocalist who could shred on vocals and command a stage! So it turned into what you hear on our latest album. 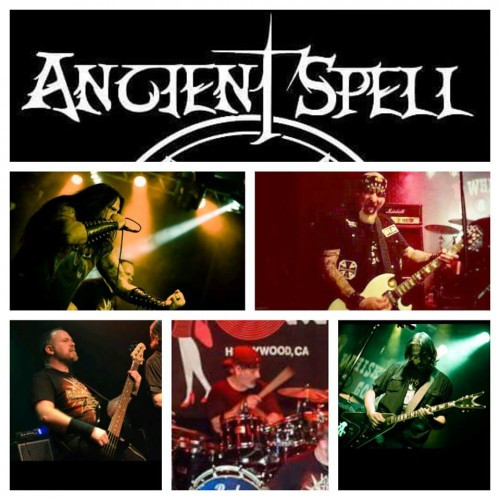 Yes, you sang on the first Ancient Spell album — why did you pass the post of vocalist to Donnie?

I wanted more brutal souding vocals and a frontman who could command the stage!

Conrad, where did you play before? And for how long have you been involved in the heavy scene? When did you start to play?

I have only played in the U.S. I have been playing Heavy music since 1985. But also play other styles. I started playing Guitar when I was 10 years old. So around 30 years.

You’re from Los Angeles, and this city has a huge rock scene. How did the local scene influence you?

The local scene was very influential in the ’80s for me. A lot of Heavy Metal bands came out of L.A. and also came to L.A. to play. The scene was amazing! 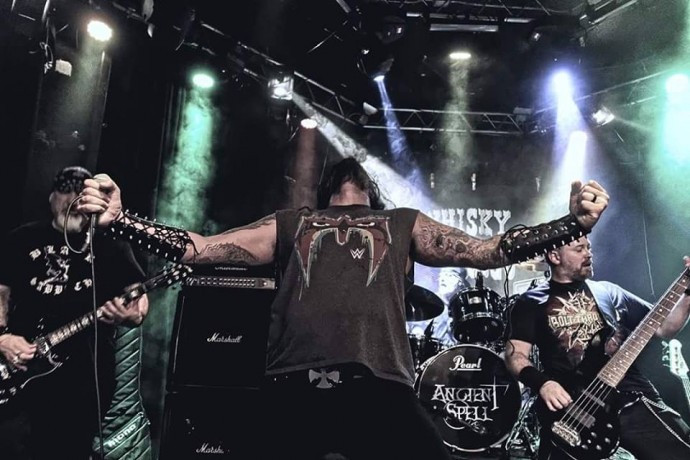 What are your primary goals considering Ancient Spell today?

To do as many live performances as possible. To play bigger festival-type events. To go play in other countries and to keep writing new material and putting out new albums as long as we can.

How do you see the band’s perspectives after the release of the Forever In Hell album?

I see us just improving and getting better as a band and gaining more and more fans!

What was on your mind when you entered the studio to record your debut album Ancient Spell? What kind of emotions and ideas did you bring there?

Well, the debut was a self-titled album that had 3 songs that we still play today. “Bleeding Black”, “Wizard ov Doom”, and “Lockdown”. We have videos for both “Bleeding Black” and “Wizard ov Doom”. Our fans really like those 3 songs, so we have kept them on our live performance set. The emotion was excitement that we were going to record an album with our new songs of Doom/Metal that we had been wanting to do for a while.

I remember only one band who probably plays in a similar key — Elliott’s Keep from Texas. Is it difficult to find recognition when you play such music? Or do you just shoot two hares with one bullet, attracting the attention of fans of both doom and thrash / death metal?

One Bullet!!!! hahaha! Not difficult at all. Most people who like us, like different styles of Metal, so to them, we are a perfect blend of what they like. 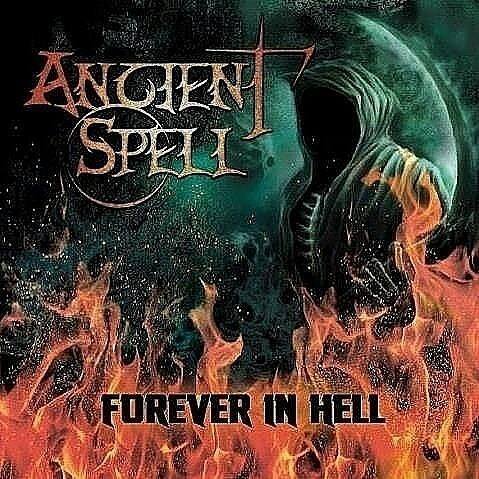 Your second album Forever in Hell released by Minotauro Records in September 2015 strictly continues the direction you followed on your debut record. What are the main differences between these two works?

Forever in Hell has the whole new lineup. We went in the studio with the mind-set that we were going to lay down our new songs that we are totally 100% happy with and confident that they were going to make a big impact with our fans and the Metal world. We basically went in the studio to Get it Done!!! We knew that the new songs with the new Vocals were way more brutal, and that’s what we wanted. We wanted monster vocals that the first album did not have. I think we accomplished that very well on Forever in Hell!!!

A pair of weeks ago the official video for the Ancient Spell song “Fall of Humanity” was published. It looks pretty straightforward and old school… Well, the topic of this song is clear, but anyway – why did you choose this track for shooting the video?

We felt that this track had the most hooky riff of them all. It has that “Chuggerrific” heavy groove to it and a strong chorus that sticks in your head! Along with one of the oldest tragedy’s of mankind. Sad but true topic. One of the many Doom’s we face as humans.

How long did you record it? What are your general requirements for the equipment you use during recording sessions?

The album took about 2 months. Went pretty fast. We did all main tracks in about 4 weeks. Then the mixing and mastering another 4 weeks or so. We use all the equipment we use when we play live. Same equipment, so there is a consistency there when people see us live. Of course when you hear it live, it is 100 times better, heavier, and more intense then when you just hear it on record. 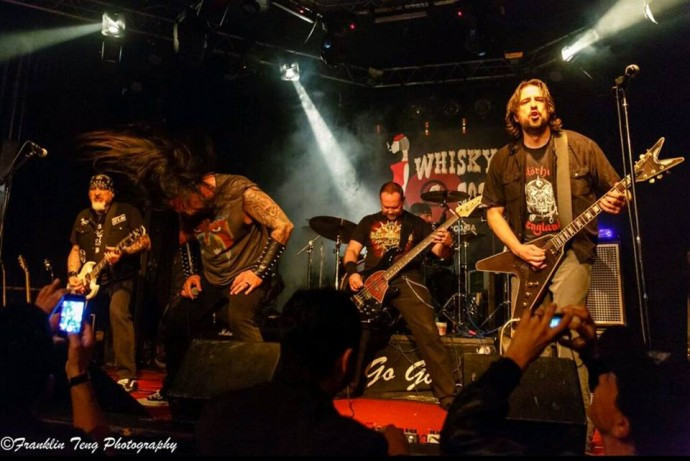 What sort of metal lyrics do you prefer? And did you set yourself a goal to make Ancient Spell a means of communication between you and listeners, not only through music but also through lyrics?

I tend to naturally stay within the Death, Doom, and Dark genre style of lyrics. I feel that these kind of lyrics have more inpact with our fans. They can relate to these type of lyrics a lot more than just a song or lyrics about simple things that have no depth.

Conrad, I’d like to ask you tell a story of one particular song from Forever in Hell – which one would you prefer?

JUST BREATHE WHILE YOU CAN

GRAB LIFE BY THE HORNS

FIGHT ON TILL THE END

DESTROY ALL WHO SCORN

YOUR BLACKENED SOUL WILL BURN

SWALLOW ALL THE TEARS

CONFRONT ALL YOUR FEARS

DESPISE ALL YOU HATE

BEFORE IT’S TOO LATE

DESTROY AND CONQUER ALL

What kind of feedback have you gotten for the new album? And can you suggest how widely Ancient Spell is known?

We are getting extremely excellent feedback. Lot’s of positive reviews from all over the world.

I think we are slowly getting known a lot in Europe and we have seen fans on our profile page from many different countries, like Malaysia, Japan, Australia, and South America. Only those numbers are small and slowly growing, but we hope to keep going as far as we can to reach as many countries as possible.

Well, now you know that there’s at least one man in Russia who knows Ancient Spell! How do you communicate with your fans besides gigs? And where do people support the band more intensively – in the States or in Europe?

Just through social media and a lot of Internet Radio Stations around the world play our music. I would say more in the States right now than Europe. 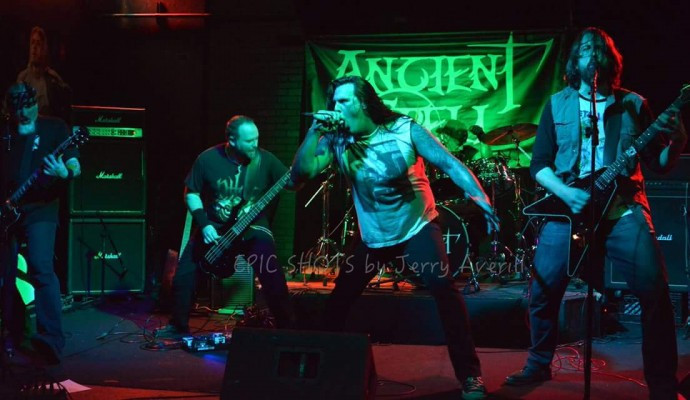 What are the Ancient Spell plans for 2016?

Live performances throughout the year and a break in the winter to record new album to put out in 2017!

Got it! Thanks Conrad! Then I wish you and Ancient Spell all the best in performing these plans. Do you have few more words for our readers?

Just want to say thanks for reading about Ancient Spell and thanks for being Metal fans. We hope to someday tour the world! \m/