(Our old friend from New Zealand and occasional guest writer Booker brings us a collection of new releases discovered through their cover art, along with some very entertaining words.)

“You should never judge a book by its cover”, or so the saying goes. No doubt most of us try and do the same with our approach to metal. Yet somehow, in amongst all the diversity of music out there, the community of metal musicians seems to self-organize; just like some drops of T-1000 liquid metal coming together to form a greater terrifying machine, different minds and souls from across the world end up uniting in their artistic endeavours and adorning their albums with specific, identifiable, cover themes. For the most part, seeing a cover with a certain “typical genre X” album art style can lead you to a fair idea of what aural treasures lie inside, but sometimes they can come out of left field and surprise you. We shouldn’t judge albums by their cover, but let’s be honest: we might say we don’t, but we all do. Like masturbation.

Once upon a time back in NCS history, Islander ran a series called “Eye Catchers” dedicated to albums that hooked you in with their artwork (and other tasty aspects). As I was perusing Bandcamp for delicious new audio treats, I realised that I too was basing my decisions of what to listen to by inadvertently succumbing to the artwork, like a moth to flame. So I figured, the hell with it, let’s see where this folly-filled exercise leads me…. and after a few surprises, and some fails, here’s a few highlights I’d like to share. 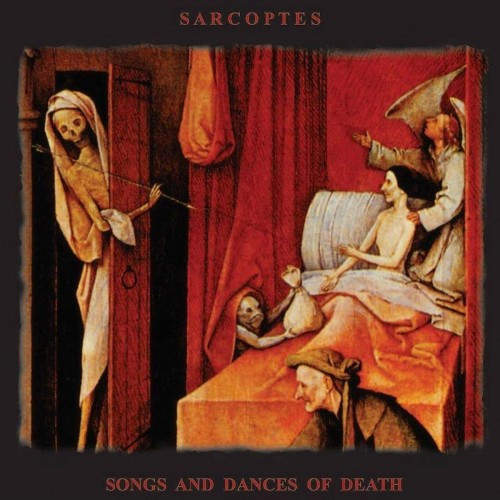 Sarcoptes – Songs and Dances of Death

Well, one look at this and I was sold. If the cover art seems familiar it’s because it comes forth from the talents of one of the greats — whose artwork you’ve probably seen adorning the covers of many a metal release even if you didn’t know it — Hieronymus Bosch. In this case, Sarcoptes go with “Death and the Miser” from circa 1485 (seriously, what was in the water back then? It’s like they lived and breathed metal).

According to The National Gallery of Art, where the original artwork resides, Hieronymus was misunderstood by his contemporaries, and “a moralist, profoundly pessimistic about man’s inevitable descent into sin and damnation”. In other words, he was metal.

And a descent into sin and damnation is exactly the kind of journey you can expect from Songs and Dances of Death. Sarcoptes deliver a near unrelenting assault of blackened fury, but throw in some guitar melodies, synthesized gothic choral elements, and even the odd touch of oriental influence, and you have yourself a lovely little witches brew of sound to pull your mind towards memento mori -– the knowledge that all life is fleeting, and one day we’ll all have our own little dance with death.

Songs and Dances of Death is Sarcoptes’ first full-length, released April 22nd via Cimmerian Shade Recordings. Their previous EP is also available on their Bandcamp page:

P.S. You can find out more about the artwork “Death and the Miser”, and download a hi-res copy, via: https://www.nga.gov/collection/gallery/gg39/gg39-41645.html 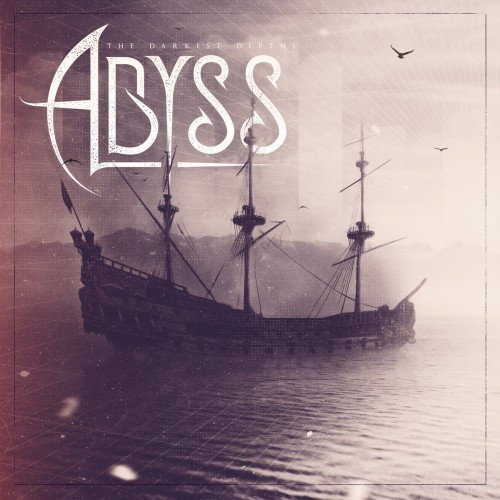 Maybe I’ve just been watching way too much Black Sails, but I can’t help but wonder about the kind of mindset it would have taken to craft an enormous sailing vessel from wood, load up a set amount of supplies, and set out to the edge of the known world in pursuit of forging empires and discovering new lands. Not to mention the sheer physical exertion required to build such a craft before power tools were invented. Or strapping in a few cannons, you know, just in case you came across another such vessel similarly adorned with cannons (seriously, what was in the water those days?). Maybe the morbid fascination also comes from being in New Zealand, where the land was first “discovered” (*cough* as in, by a white person *cough*) after Captain Cook sailed halfway around the planet on one of those things… and then turned into a humourless megalomaniac and essentially was consumed by his own arrogance before being murdered.

So sailing ships are both wonders of engineering, symbols of unnerving bravado, and vessels that can bring out all our feeble human weaknesses. In other words, metal.

So the cover art for Abyss immediately caught my attention. Is the ship becalmed, with the crew slowly starving to death? Why are there no sails? Are those birds circling waiting to pick the dying flesh off a dying crew? So many questions. And the grid overlaid on water and sky suggested there could be some kind of modern twist to whatever sounds this album held.

Lo and behold, Abyss is a (sort-of) one-man deathcore band, created by Peter Noschese. Peter provides guitar, bass and vocal duties, while drumming comes courtesy of Kevin Talley, whose list of credits on Metal Archives is like a who’s who of the last decade of metal (seriously, what’s in the water this guy is drinking?).

The Darkest Depths starts with an introductory track, “The End of the World”, with the ever-present Oppenheimer “destroyer of worlds quote”. (Which makes me wonder – when bands use this quote, are they referring to the idea of nuclear weapons as destroyers of worlds, or the god Vishnu, who features in the myth Oppenheimer refers to? Or has Vishnu come into life in the form of nuclear weapons?). Once again, so many questions.

“Bloodlust”, which plays by default on the Bandcamp page, is perhaps the most typically deathcore song off the EP, but Abyss makes nice use of the contrast of a higher pitch, melodic guitar line in the chorus to offset the guttural vocal and seismic guitar tone onslaught. It’s the kind of songwriting touch that I always feel is necessary to provide some color to deathcore, and ultimately, it’s the relief and diversity of some lighter touches that makes the heavy even heavier when it kicks back in. Elsewhere in the album, aspects of death metal and even thrash overtones make an appearance, such as “Isle of Self Defeat”, or the guest guitar work by Trayen Burke on “Delusions of Sanity”. 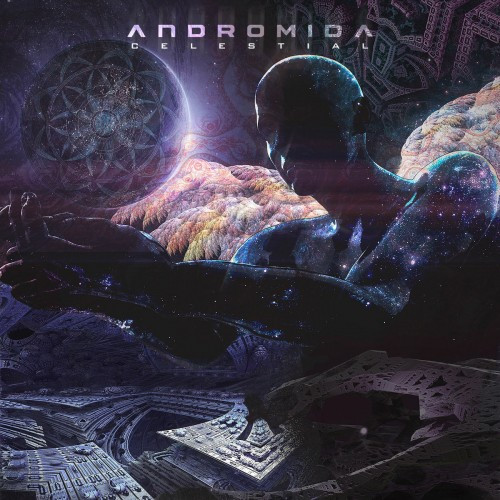 I’ll admit, I had this pinned as tech-death after looking at the cover. Space, check. A slightly androgynous superimposed humanoid, check. With a mandala-like symbol in the picture, I thought perhaps an oriental vibe or Cynic-esque Eastern philosophy would be thrown in for good measure. Turns out I was wrong — but after hearing the sounds on offer, I didn’t care anymore.

Andromida is the band name of a one-man instrumental outfit, Ramon Gutierrez. Celestial, the EP, releases in full on 20 May, with the title track “Celestial” available for streaming now. And I’m afraid I can’t tell you any more – for the life of me, the great omniscient search engine of our age refuses to divulge any more secrets about the origins or history of Andromida and its creator (though Bandcamp indicates he is from Pittsburgh). 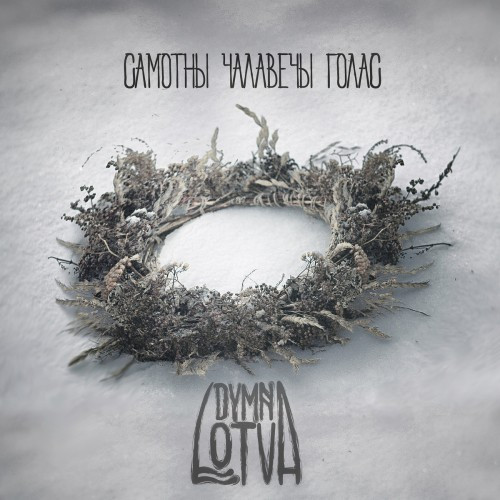 I can’t exactly say what it is that drew me in about the artwork of Dymna Lotva. Deceptively simple, yet somehow left me wondering and wanting to hear more.

What started off as a spoken-word track, punctuated with the kind of bloodcurdling screams that leave your hairs standing on end, soon made me feel like I was immersed in the soundtrack to some movie I’d never seen.

But the real story to the track isn’t fiction at all – but the horrors of one of the most famous industrial disasters of the 20th century. Here’s the accompanying intro they posted on their Facebook page on the day of release, 25 April:

“Today is the 30th anniversary of the Chernobyl disaster, the tragedy that irreversibly changed the life of our motherland.

“By means of this single we pay our tribute to all those people whose lives were mangled, trampled by Chernobyl. The text is made of fragments of Lyudmila Ignatenko’s “A Solitary Human Voice” monologue which has been included into Svetlana Alexievich’s book “Chernobyl Prayer”.

“This is a story about pain, death and love.” 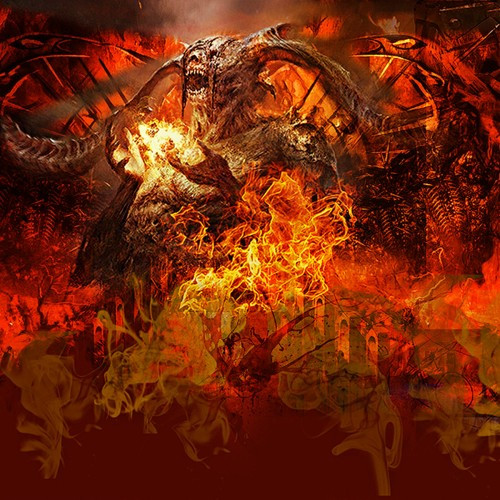 Well, there’ll be no surprises as to why I was compelled – nay, possessed — to find out more about the sound behind this cover art. It’s the kind of image that promises hellfire and a blitzkrieg suitable for the end of days.

Well fear not, because Gates of Westminster have taken that burning fire within, and just like the demon on the cover — instead of being consumed by it — forge it in their hands, fuse it into form, and transmute it into sound by virtue of a crushing mastery of their instruments.

From the scant information available on their Bandcamp page, Gates of Westminster hail from Brooklyn, made up of Joshua Roman and Daniel Cohen, with a guest appearance from Gabriel Salazar.

12 Responses to “JUDGING RELEASES BY COVERS”