Singularity is the new album by the Swiss band Stortregn, and it’s an electrifying adrenaline rush from start to finish. The album will be released by the Dutch label Non Serviam Records on May 27, and today we give you the chance to hear all of it in advance of the release.

This is the band’s third album, and it sets a high-water mark for Stortregn, both in songwriting and in performance, as well as displaying a continued evolution in the band’s musical style. 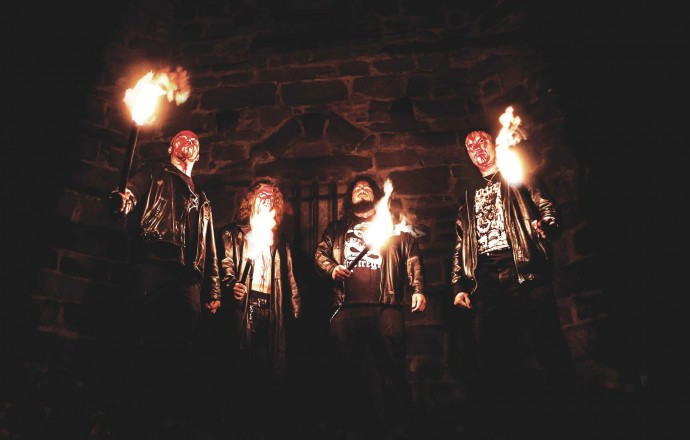 Drawing upon the rich traditions of Scandinavian melodic death metal as well as Nordic black metal, Singularity may remind listeners of At the Gates at their most ferocious, accompanied at times by the wintry chill of early Dissection.

While the band do occasionally slow the pace from their usual raging inferno of sound, the album is by and large a thrill ride, propelled by piston-like drumming and a phalanx of jolting, galloping, thundering riffs. The vocals are usually as inflamed as the music, alternating between goblin snarls and leonine roars, though here and there ghastly whispers and solemn spoken words also make appearances.

What really makes all the songs stand out so strongly are the sparkling lead guitar performances. The melodies are highly infectious, unfurled by lead guitar arpeggios that dart, swirl, shimmer, and soar, and by compelling dual-guitar harmonies. The  soloing is also never less than riveting. (And unless my ears deceive me, there are some keyboard additions that even further enhance the music’s addictive appeal — especially in the second track, “Acosmic Ascendant”).

But the album includes one more ingredient that helps make it a special one: In many of the songs, Stortregn employ classically inclined acoustic guitar pieces, sometimes standing alone in the introductions or conclusions, sometimes integrated with the rest of the instrumental performances, and in one case (“Elegy”) as the sole centerpiece of an instrumental track that provides a rare, dreamlike breather in the album’s onward rush of momentum.

The album has been given a blade-sharp production that separates the instrumental ingredients but doesn’t diminish the thundering power of the music.

The album also includes artwork and layout was by one of our favorite metal artists, Juanjo Castellano.

Enjoy the full stream below, and for further information, check these links: