(In this post Grant Skelton reviews the new EP by Finland’s The Lone Madman — an exception to our “rule”.)

“…Finland has perhaps the most heavy metal bands in the world, per capita…” If President Obama himself is aware of Finland’s contributions to heavy metal, then it would certainly behoove us at No Clean Singing to follow suit (and obviously not for the first time). Children Of Bodom, Ensiferum, Shape Of Despair, Amorphis, Omnium Gatherum, Swallow The Sun, Skepticism, Insomnium. And those are only a scant few!

I must give credit to the stellar blog The Shrieks From Below for my discovery of Helsinki’s The Lone Madman. In recent years, I’ve become quite a doom hoarder. You know what they say. “Listening to doom all day keeps the reaper at bay.” If you’ve enjoyed the recent resurgence in heavy, traditional, and/or epic doom from Crypt Sermon, Below, and Pilgrim, then The Lone Madman are the cushion for your proverbial casket. 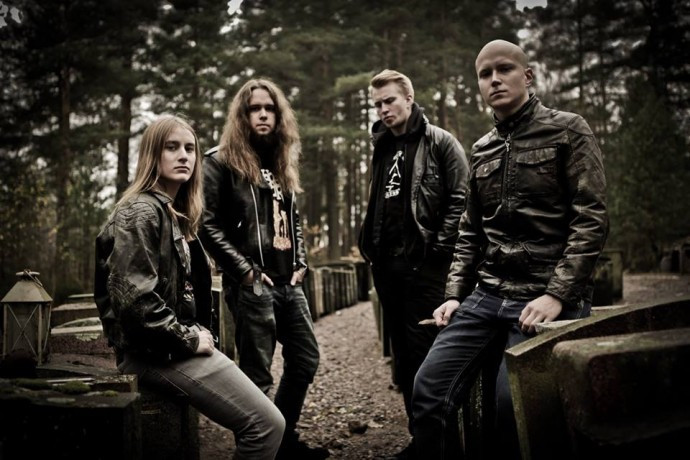 The Lone Madman is:

The band formed in 2014. Their first official release was a digital single for “Soul Stillborn” in February of this year. Look for that track on the band’s independent EP Dreary Task, which is the subject of this review. Dreary Task was released independently on May 1.

The EP begins with an ominous intro, entitled “Intro (Strigoi).” Being the curious collector of the arcane that I am, I dug around the interhole for the meaning of “strigoi.” According to Roman mythology, strigoi are anguished spirits of the dead. Their attributes may include invisibility, shapeshifting, and exsanguinating the living. Strigoi are the basis for what we understand as a vampire. The intro opens with the subtle, afflicted tones of an organ before Veera Vallinkoski’s bass takes a pulpy chunk out of your neck.

The grisly and throbbing bass tone segues into “Soul Stillborn,” the EP’s first proper song. The snare, and particularly the cymbals, from drummer Leevi Lönnrot add a genuinely spectral element to this song. The riffs in this track will hurl you to the ground and trod all over your corpse. And back again. Juuso Raunio and Turkka Inkilä give us a hammering, stomping groove that isn’t afraid to cleave open the back of your skull.

“Invocation” is the EPs lengthiest track at 12:31. And not a second of that is filler. This song sees The Lone Madman showing us the strength of their songwriting, especially for such a long track. This song is indisputably hooky. And I don’t mean in the prefabricated-for-mass-consumption sense. Everything about this track works. And it works well. Everything about this track screams:“You shall listen to me again, O mortal puppet!”

Any band can write a doom riff. But I want bands that write great songs. And, in this humble reviewer’s opinion, The Lone Madman do just that! Even if you don’t speak Latin (I don’t!), the layered choir chant of this song’s chorus will literally invade your brain like a parasitic mollusk. And you’ll want it to stay there.

“Oh Death” is the EP’s best track. And I don’t mean that it’s good. Or even great. “O Death” is doom. At its essence, the song epitomizes doom metal. A thudding, irreverent bass riff creeps in like a shadowed fiend. This song evokes a similar dichotomy to monsters in horror films. You don’t want to see the grotesquerie step out of the shadow…but you can’t look away once it does.

From 0:01 until just about 1:49, The Lone Madman build suspense with Hitchcockian precision. Hell, if Alfred Hitchcock wrote a doom metal song, “Oh Death” would be it. The chorus is, I presume, a play on the Appalachian folk song of the same name, albeit with an appropriately darkened twist. Whereas the folk song beseeches Death to depart (“Oh Death won’t you spare me over another year.”), The Lone Madman asks Death for a present release from life (“Oh Death, don’t spare me over ‘til another year.”), The song’s finale (beginning around 7:08) is deliberately, decisively epic.

This is how traditional doom is done, folks. Somebody sign this band and produce a full-length!