Today Debemur Morti Productions releases the new fifth album by the infamous Finnish horde Behexen. Its name is The Poisonous Path, and we’re helping deliver the stream to your ears.

The smart move would be to skip down to the bottom of this post and start playing the album, even if you intend to read the following paragraphs. The album is so good that there’s no reason to lose any time before inviting it into your head, where it will trigger the release of adrenaline and then drive all other thoughts away with blades and fire. 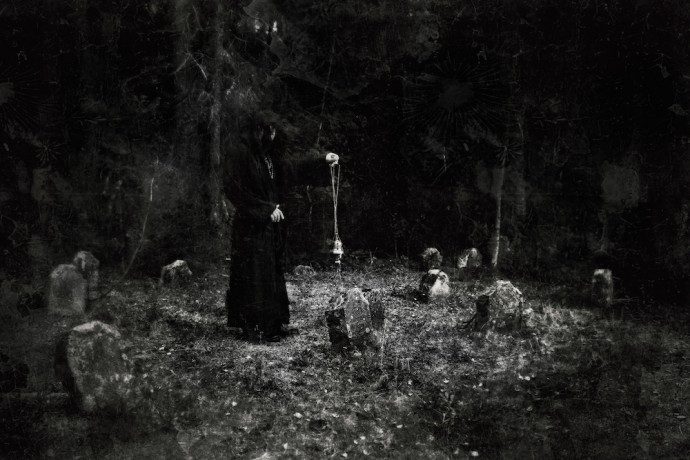 In keeping with Behexen’s reputation, the music is the kind of black metal that summons up words like “bestial” and “savage”. But this new album is also more multifaceted, more well-plotted, and more fascinating than those adjectives might suggest to most listeners.

To be sure, the ferocity of Behexen’s attack is undeniable. The songs hit with the power of a raging storm, the music having been produced in a way that gives it a massive, pulverizing sound. The drums really do sound like thunder, while the bass resembles a rumbling avalanche. The riffs — which are never less than magnetic — are themselves deep and destructive. And Torog’s jagged, gravel-throated invocations of Lucifer burn with blood lust.

When Behexen give themselves over fully to speed (which is most of the time on this album), they thrash, slash, and gallop so intensely that they create the sensation of being caught in a mad demonic rampage. When they slow the pace, as in “A Sword of Promethean Fire” or in the second half of “Chalice of the Abyssal Water”, the effect is brutally skull-crushing and soul-scouring in its bleakness.

Yet as overpowering as the music often is, it’s also terrifyingly eerie, laced with luminous, alien guitar arpeggios and ominous, dissonant chords. Harrowing ambient sounds conclude or begin certain tracks, creating pitch-black paths that draw the mind toward the abyss.

There are 10 songs on the album, and they don’t wear out their welcome. It’s a gripping, triumphant hell ride from start to finish, one of the best black metal albums of the year and maybe Behexen’s best album yet.

But if you took our advice and started listening a few paragraphs ago, you’re already beginning to figure that out for yourselves. Stay with it — the long last track “Rakkaudesta Saatanaan” may be the best and most interesting one on a uniformly strong album.

The Poisonous Path is available from Debemur Morti’s web shop or via Bandcamp.

2 Responses to “AN NCS ALBUM PREMIERE: BEHEXEN — “THE POISONOUS PATH””