More than two and a half years have passed since I last wrote about the Slovenian black metal band Cvinger, in connection with their excellent 2013 EP, Monastery of Fallen — and then failed to pay proper attention to the band’s debut album, 2014’s Enthronement ov Diabolical Souls. But I’m not making that mistake again.

Cvinger’s new album Embodied In Incense will be released by Art Gates Records worldwide on May 30, and it definitely should not be missed. To make sure you don’t miss it, we’re helping to premiere a full album stream in this very post. 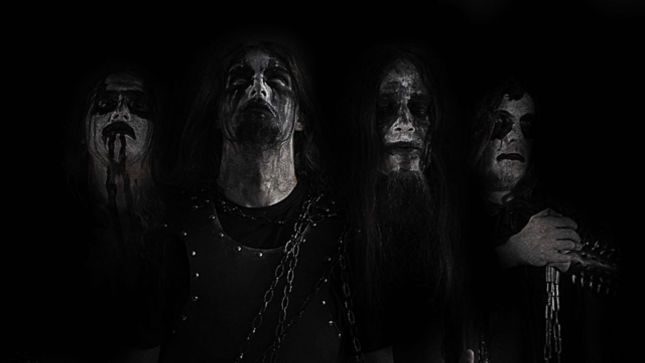 When I heard the first two song premieres from the album — the title track “Embodied In Incense” and more recently “Pslam, Of A Hollow Man” — I was knocked flat by them, and I’ll repeat what I wrote then:

“The title track comes with an excellent video that combines bloody animation and distorted visuals of the band performing. The dynamic song is as grim as cancer, a massively heavy bone-grinder that moans and groans, crushes and cremates, jolts and jabs — all of it shrouded in occult atmosphere. “Psalm, Of A Hollow Man” combines similar ingredients but is more tumultuous, torrential, warlike, and chaotic — though before it ends, it transforms into a hammering headbanger. Both songs are savage killers.”

The entire album is a similarly punishing, but twisting and turning, experience. Presented with a powerful production, it amply delivers crushing black metal ferocity, yet provides much more than pulse-pounding savagery. It brings dynamic tempo changes, unpredictably mutating riffs, and haunting atmospheric touches. The whole album is a gripping listen — it will put your neck in an iron grip and won’t let go.

Embodied In Incense was recorded, mixed, and mastered in Endarkes Studio Sweden by Magnus Devo Andersson (Marduk) and includes wonderful cover art by the maestro Paolo Girardi. To pre-order the album, go HERE.

3 Responses to “AN NCS ALBUM PREMIERE: CVINGER — “EMBODIED IN INCENSE””