(DGR presents this Sunday’s Rearview Mirror installment, reflecting upon the metal of yesteryear.)

I have to confess that there was a moment in writing this when it occurred to me that I was going to have to justify enjoying Biomechanical’s last album. It was an oddly sobering thought, especially in the face of discs like Eight Moons and The Empire Of The Worlds, which are albums it feels like history looks upon more kindly.

The last time I sat down and took over the Rearview Mirror column for a bit, I found myself vouching for the idea of an album that is “half-good” — one of those discs that isn’t the strongest, but half of it really seems to be on to something and for that reason always sticks out in your mind. Since then, I’ve played with a couple of other ideas for Rearview Mirror posts in order to alleviate some of the burden on our glorious editor-person, but the half-good album idea has continued to gnaw at me, at least for another edition. 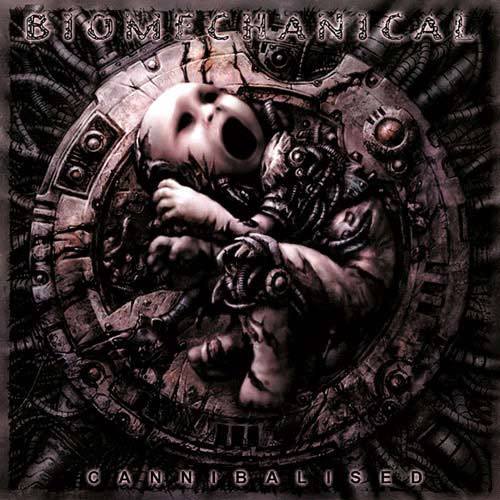 Partially, it’s because there was one album that popped into my head the moment I scrawled those words across that morning’s tome and it has been partially responsible for gumming up the works when it comes to the four other installments I have saved on my desktop. The album is Biomechanical’s 2008 release, Cannibalised.

This was one of those situations that immediately sprung to mind as a “When the hell else are you ever going to be able to bring up a disc like this?” Biomechanical were a UK-based prog/death/groove/thrash hybrid band that became increasingly harder to pin down genre-wise as their career went on.

The group have three albums to their name, a 2002 release entitled Eight Moons, 2005’s The Empire Of Worlds, and our subject for today, Cannibalised. Biomechanical had a relatively stable core of musicians for a good chunk of their career, but by the time Biomechanical was effectively put on hold there was only one original member left — vocalist/keyboardist and songwriter John K (a simplified name for Greek musician Yiannis Koutselinis).

Cannibalised was a troubled release, with the break-up of the band overshadowing a large part of the album itself and coloring its history, as John K parted ways with the other musicians involved in Biomechanical, leading to public recriminations (as discussed here, for example).

The impression I had at the time was that this album was the one where John K really tried to make Biomechanical his own, although to hear it told, all three Biomechanical albums were meant to be part of a fully formed story from the get-go and he was the main composer throughout the band’s career. For whatever reason, Cannibalised is one of the albums firmly perched on the throne of the “half-good”. Because Cannibalised is kind of a mess. 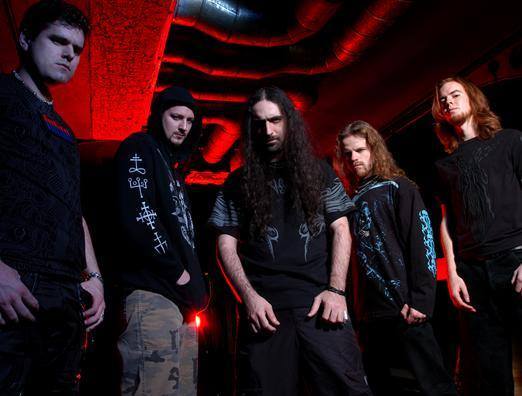 Two things really tend to stick with people when it comes to Cannibalised (well, three if you count the under-the-skin unnervingness of its album art): One is that Biomechanical have one speed of song on the album,and that is insanely fast. I’ve often seen it described as aggression for aggression’s sake, and Cannibalised is one of those albums where the forty-seven minutes that you spend with it can actually prove to be overwhelming. It’s a lot of double-bass drum being hit at high speed and wailing guitars to have to work your way through.

Second would be the vocal work. If there is anything to be said about John on Cannibalised, it is that the dude covered some ground on this disc. He spends much of the album shrieking like Rob Halford set ablaze and then switches to a harried scream at the drop of hat, much like the music does.

Among the faults one could find on Biomechanical is that although it puts a multitude of different metal genres on display, it suffers from the ten pounds of shit in a five pound bag issue — many of Cannibalised’s songs are like a blackjack hand where somebody hits on a 20, only to draw a nine. It sounds like the songwriting sessions included dialogue along the lines of, “Alright, this is really, really close to being complete, but what if we layered this massive industrial noise grinding layer on top of it?”.

If Biomechanical’s goal with this album was to be huge and operatic, at the very least that much was accomplished. But albums can’t get by on sheer bombast alone — which half of Cannibalised winds up trying to do.

But songs like “Fallen In Fear”, “Through Hatred Arise”, “Breathing Silence”, “Consumed”, “Predatory”, and the title track have always stuck out in this chaotic explosion of a disc. “Fallen In Fear” is as close as Biomechanical ever got to having a single for this album, and that song is a ragged mess of guitar and drum work that barely seems to be holding itself together. Half of the fun of “Fallen In Fear” comes from waiting to see when the song is just going to fall apart at the seems. Like many songs on Cannibalised, it is a shaky Frankenstein’s monster of sound and we arrive just as the threads are coming loose.

The other four songs are all different shades of the same coin, sometimes sounding like attempts to record what holding your face up to a roaring fireplace might look like, but it was in that chaotic and industrial mess that I could see the seeds of fantastic songs. They were mutated into these superfast headbangers that just seemed ready to explode, but the run of “Breathing Silence” through “Consumed” is the series of songs where you can really hear Cannibalised coming into its own. (“Slow The Poison” has always been an on/off love affair for me, and as of this writing, it’s in “off” state; I actually have the same issue with the second song on this album, “The Unseen”). It tries real hard to maintain that throughout the rest of the disc and hits again in its closing song, but Cannibalised is one of those rare discs where its enthusiasm for contorting heavy metal into this hyperfast snarling beast of sound also proved to be its biggest flaw: It tried, really, really hard.

5 Responses to “THE REARVIEW MIRROR (BIOMECHANICAL)”