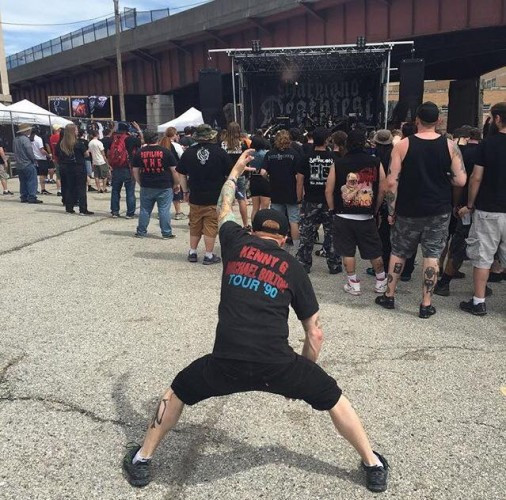 When I left Seattle early last Wednesday morning bound for Baltimore and the 14th edition of Maryland Deathfest, I was thinking I might not take any photos or write anything about the event and simply soak it up. But the whole thing was so damned exciting and so much fun that I couldn’t resist trying to document the experience.

I took more than 800 photos with my new iPhone 6S (what? you didn’t think I was a real photographer, did you?) and I made lots of mental notes (what? you didn’t think I’d actually bother typing, did you?). And as people who know me on Facebook are painfully aware, I discharged some contemporaneous impressions about most of the bands I saw. As you can now see, I couldn’t resist writing even more about the experience.

But unlike past years, I’m not going to attempt a day-by-day recap. This year, I’m going to preserve my memories in a different way. And who knows, maybe some of my NCS comrades will throw in some thoughts of their own. Because the NCS crew turned out in force this year. 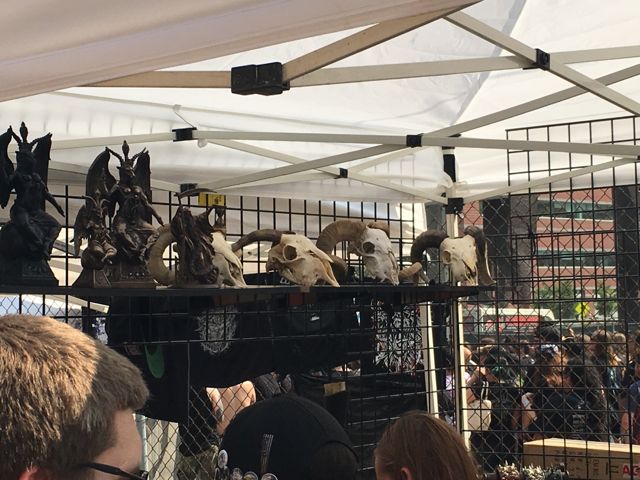 As has been true in my two previous MDF excursions, at least half the fun was the camaraderie. There’s no way any sane person can listen to heavy music non-stop for four days and five nights, and even if you could, you’d miss out on so much of what makes this event so special — the chance to reconnect with old friends and make new ones; the chance to be surrounded by people who have the same passion for this kind of music as you do, non-stop for days; the chance to eat, drink, and be merry — and talk, and yell, and scream, and nerd-out, and act stupid, and not have one single, solitary motherfucker judge you negatively for it. Not even this dude: 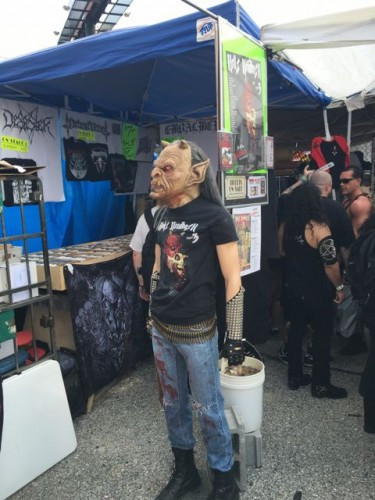 Before this week’s recap is over, I might try to name all the people (besides the bands) who made this year’s MDF the best experience I’ve had so far. But for now, I’ll just mention a few of the names most familiar to long-time NCS lurkers: Andy Synn, DGR, BadWolf — so cool to be together with the three of you who have invested thousands of unpaid hours building our putrid site into the great steaming pile of putridity that it has become.

I did not ask their permission before posting this photo, taken at an amazing Saturday morning rooftop breakfast hosted by the fabulous gentlemen from Brutalitopia, about which I will have some more to say later (and yes, it was one of those beer-with-breakfast mornings): 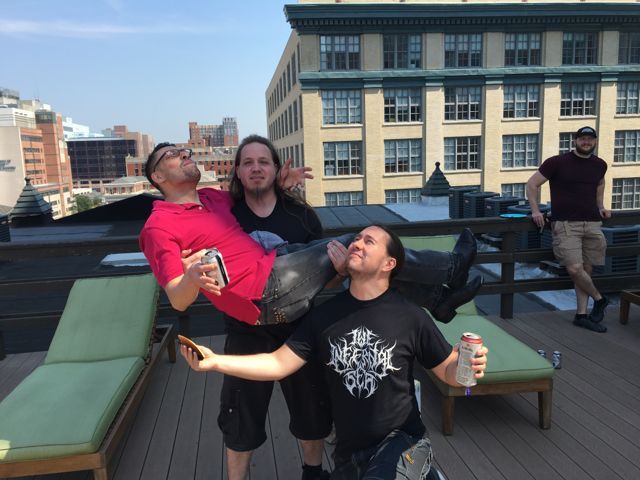 I also took lots of photos of the very metal clouds over Edison Lot, which eventually began leaking liquid about the time Interment started playing on Sunday. 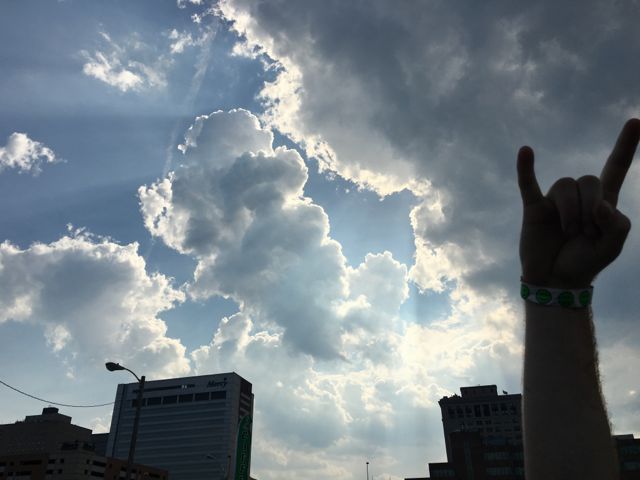 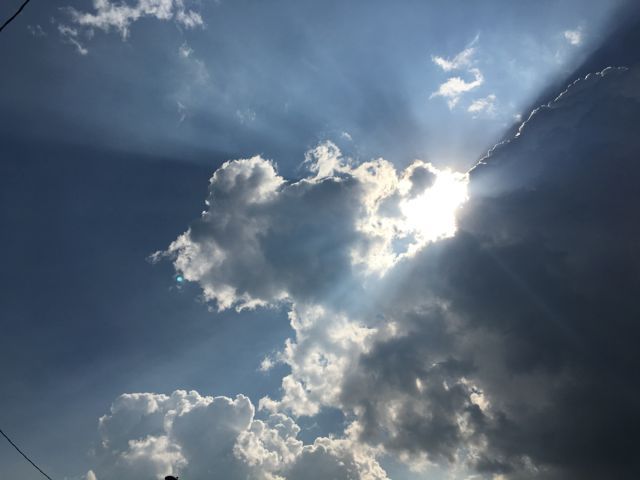 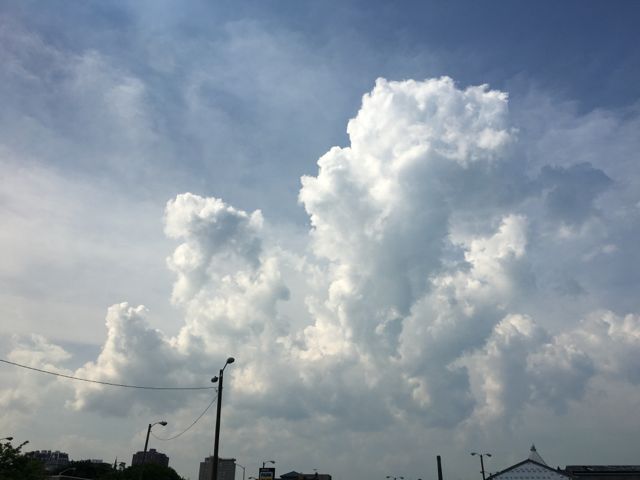 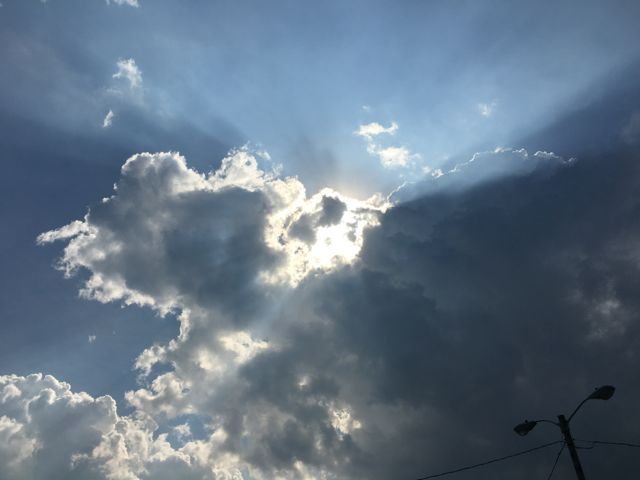 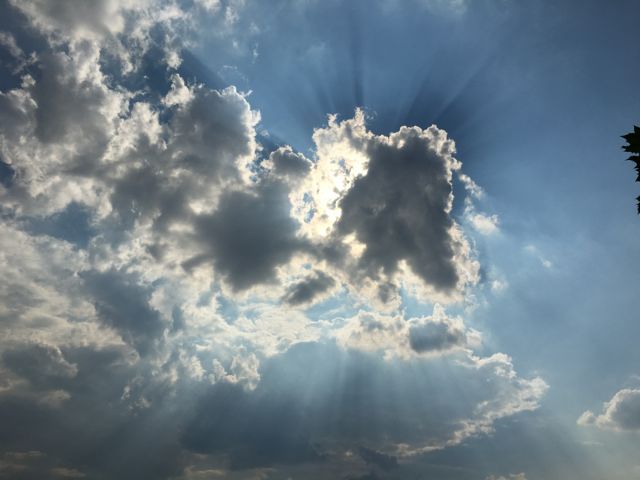 Don’t ask me why, but I also took this photo, which I would like to caption “The Abyss of Lost Souls”. Or perhaps, “The Pipeline To Hell”: 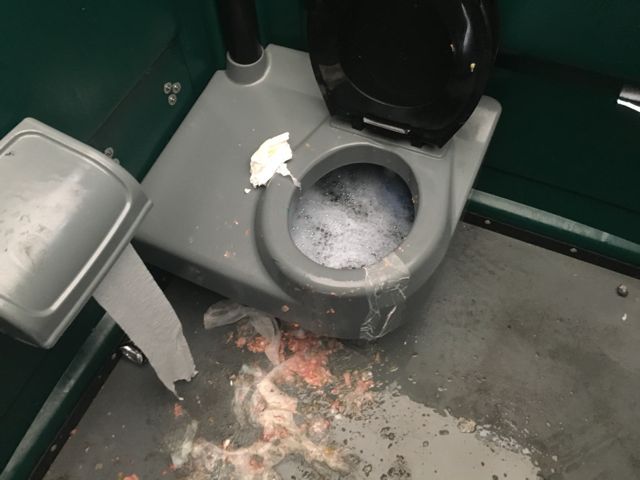 I shudder to think of how many dead brain cells were interred in these humble cemeteries. And hey, I’m not complaining. I never had to wait more than 60 seconds to get into a port-a-pottie at Edison Lot, and they were vastly better than the alternative, which would have involved soiling myself in ways that even black jeans wouldn’t have camouflaged. 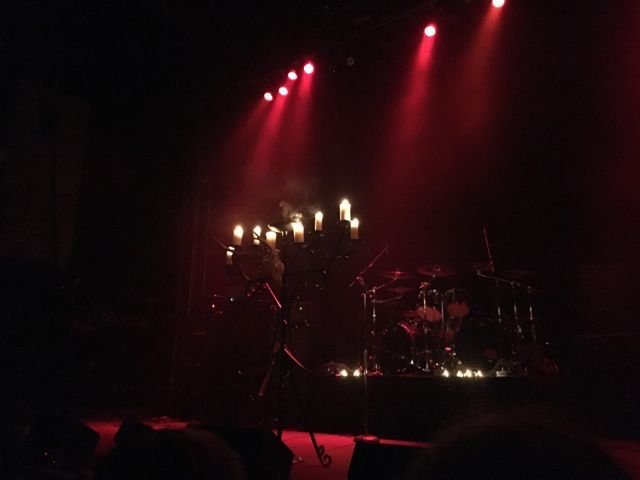 I do hesitate to make such a proclamation, because I saw so many great sets at MDF XIV — and no doubt missed many others. Yet this one was truly extraordinary, and I know I wasn’t alone in thinking that: Most of the large crew of pretty knowledgable metalheads that I hung out with for four days felt the same way, including people who I don’t think generally lean as hard as I do on this end of the extremity spectrum.

Dragged Into Sunlight played on Saturday night at Rams Head Live. They followed a tremendous set by another UK band, Grave Miasma. I’ve been a DIS fan for a long time, but had never seen them perform, and so I got up front right after Grave Miasma ended and I stayed there. Before the set began, a guy standing next to me asked me what kind of music they played. Seriously, there was a guy who’d gotten up front without any idea of what he was about to hear. I had trouble thinking of what to say, and finally just blurted out, “They play horrifying music”. And that proved to be an understatement. 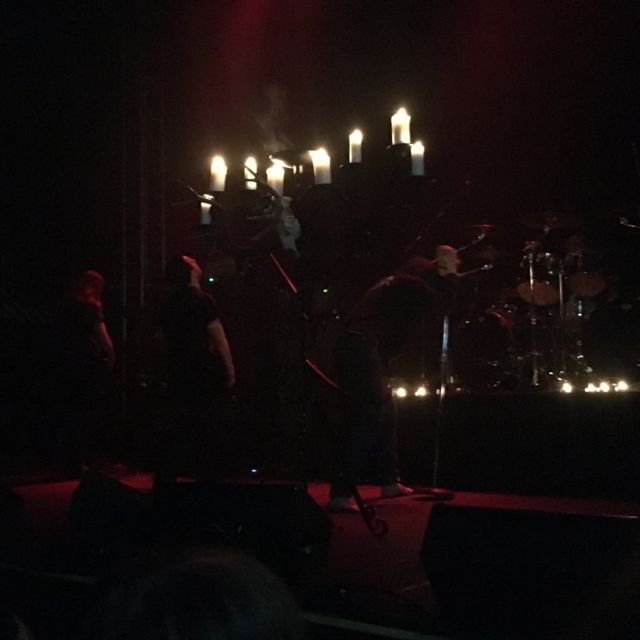 They performed with their backs to the audience, though one of the two vocalists would bolt around and face the crowd for his vocal turns, and the lead vocalist did finally turn toward the crowd for the penultimate song. Save for the glow from an enormous candelabra at the front of the stage and some brilliant lighting effects (including a strobe that seemed to be positioned someplace inside the drum kit), they were shrouded in darkness.

The lead vocalist was bent severely at the waist for most of the night, hunched over and hanging on to his mic stand as if it was the only thing keeping him from collapsing onto the stage, even when he was shrieking and roaring with such intensity that I half-expected him to spontaneously combust. To paraphrase my friend BadWolf after the show, referring to the music as a whole, this is what pain sounds like. 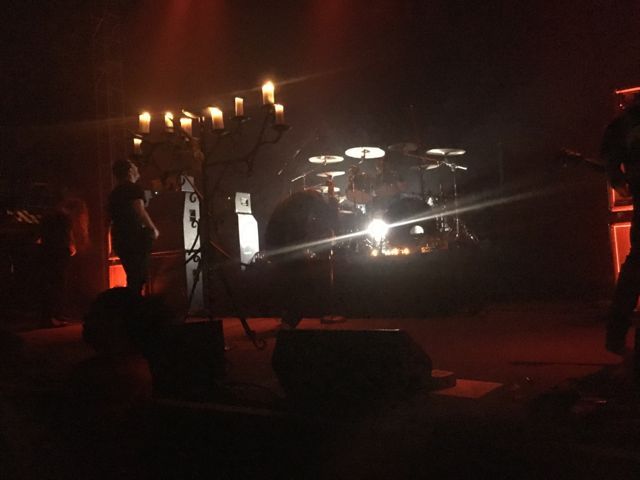 My own immediate reaction, which I wrote about 10 minutes after the set ended, was as follows: “This audience needs to be checked for radiation poisoning. Horrifying, inhuman, cataclysmic violence on a thermonuclear scale.”

I don’t think I’m capable of doing a better job than that in trying to describe the sheer overpowering abrasive force of the sound or its terrifying effect. More than once, I caught myself with my mouth hanging open. Most of the time I was in a stupefied daze; the rest of the time I was wrenching the muscles in my neck trying to stay locked in with the off-the-hook performance of the drummer (and failing). 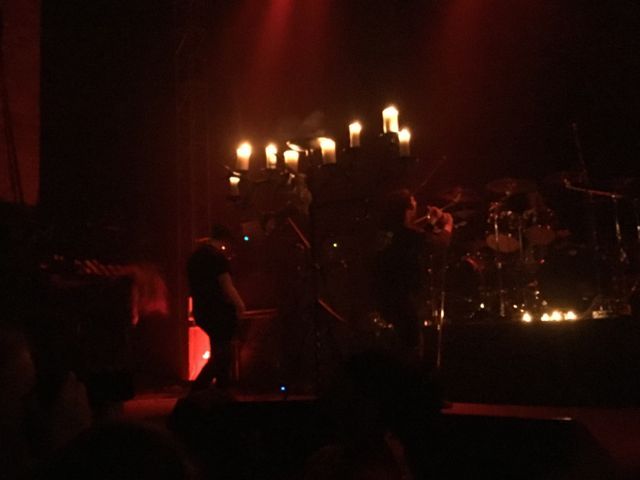 Many extreme metal bands, especially in the black/death corners of metaldom, devote their energies to creating atmospheres of alien terror and catastrophic doom. But I can’t think of anyone who has done it better in a live setting than Dragged Into Sunlight did on Saturday night. And for the sheer emotional impact of the performance, no one that I saw at MDF XIV outdid them.

I really pitied whoever might come after them (though I knew who was coming — another one of my most anticipated bands of the festival). And no doubt, having to follow DIS was part of the problem with Craft’s performance, but only part. How ironic that the best performance of the festival would be followed immediately by perhaps its biggest disappointment (and not entirely Craft’s fault either). More on that another day….

I’m going to tack on some more photos I took of the Dragged Into Sunlight set, but for anyone else out there who made it to MDF this year, I invite you to tell us in the Comment section which performance was the best one you saw this year. 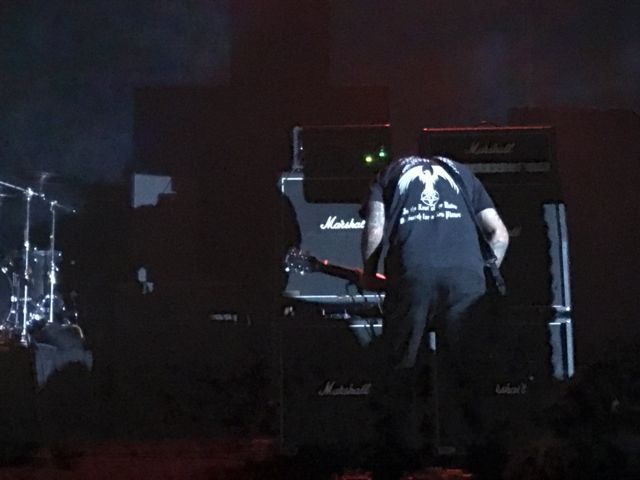 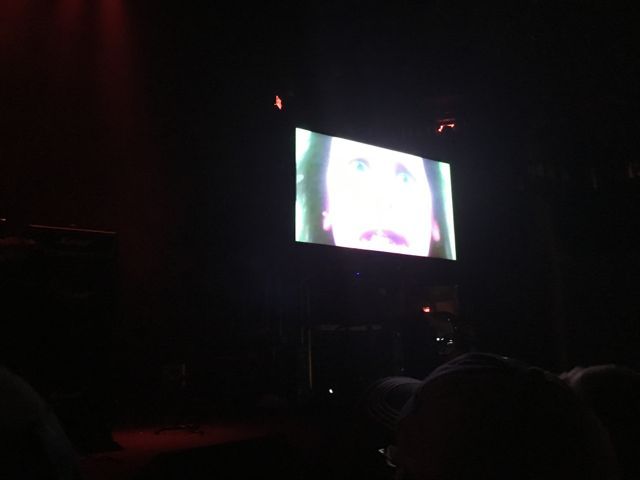 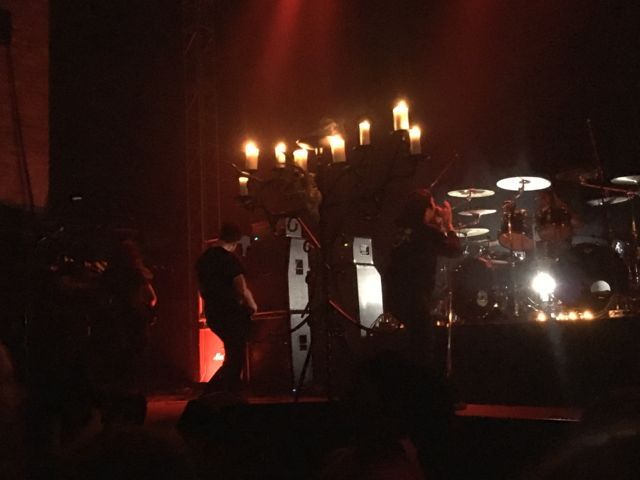 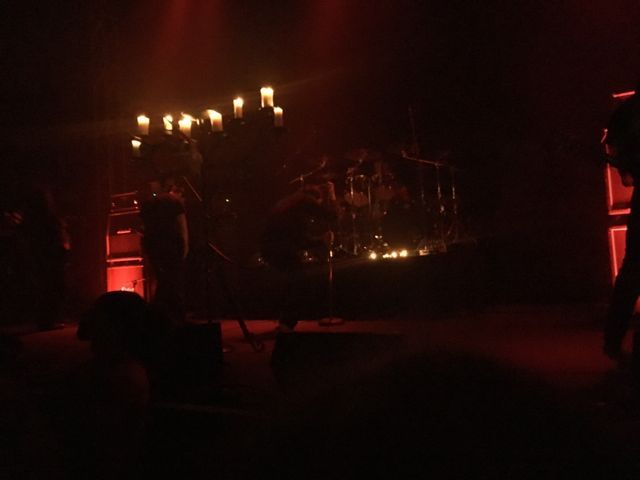 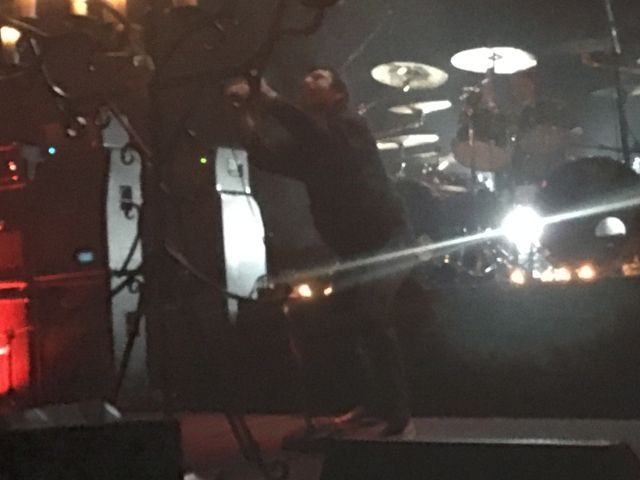 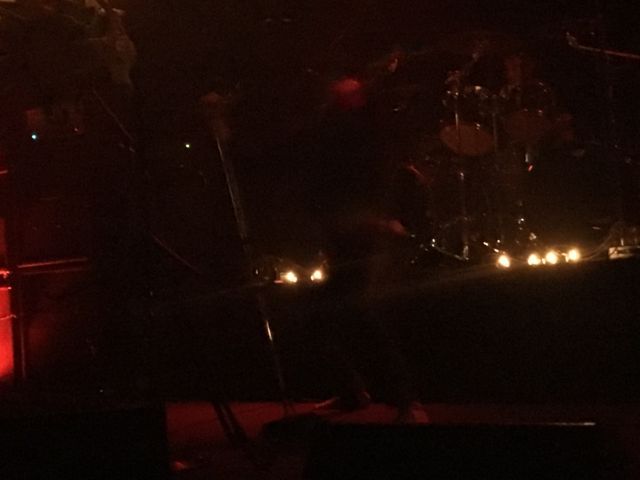