(We present Comrade Aleks’ interview of Simon Ohlsson, vocalist/guitarist of the Swedish band Vokonis, whose new album was released in late May.)

Wild, angry, and full of energy, Swedish power trio Vokonis ride in their thunderous chariot right from nowhere throwing lightning and rattling at full scale! This loud combination of doom metal and stoner is straightforward and masculine, you hear it and get the revelation — Vokonis have big balls and they literally show it on their brand new album Olde One Ascending!

We had a talk with Simon Ohlsson, singing guitarist of Vokonis. Bring it on Simon!

Hail Simon! Let us for a start clarify a fact — all of you started under the name Creedmen Arise, and you even released EP under that moniker. So what was the reason to rename the band?

Hello, thanks for having me. We started Creedsmen Arise in 2015. We recorded an EP and split up with our then bassplayer and Vocalist Gustaf. When we started writing music again we felt we didn’t want to do it under the same moniker, as it didn’t feel quite the same. So we went with the name of the crazed king of the fifth track on the album.

May I ask you what does Vokonis mean?

It doesn’t really mean anything. It’s the name of a fictional king in one of our songs. I came up with it and thought it sounded good.

Simon, what was on your mind when you were starting the band? How did you see it?

I always have had a love for playing heavy riffs with a good groove. So that was the mindset. We just want to have fun, so we make songs that we enjoy playing.

And what about vocals? How soon did you persuade the guys that your roar was exactly what the band needed?

The way I sing in the band just came naturally. We wanted rhythmical singing more than melodic singing. So it just came by itself when we constructed the songs. Expect more of that in the future. There’s plenty of bands utilizing a more melodic approach, we won’t be one of them.

By the way, is it difficult to sing in such an intensive manner during live gigs? What helps you to keep the quality of delivery?

It’s difficult to deliver like that night after night. But with vocal exercises and breathing correctly, while I sing I can manage. It’s all about technique and I’m getting better each day at handling my voice.

Your first album Olde One Ascending was released just about month ago. How did you work out this sound? And did you ever try to play with two guitars?

That sound is just something that came along. It’s the three of us together in unison. We never entertained the idea of two guitars as we felt it isn’t necessary. It’s a special feeling playing in a power trio. You’re really exposed.

For how long did you compose this material? Did you have all tracks finished when you entered the studio?

We composed it in about 2-3 months. Yes, they were all finished when we hit the studio.

It’s said that, lyrical-wise, Vokonis’ concept is based on Lovecraftian horror. Is that true? And I guess the album’s artwork hints at it, too. Do you have songs based right on Lovecraftian stories?

Yes that’s true. I have written the lyrics around Lovecraftian concepts such as unimaginable gods ha-ha. We have no songs based right off a Lovecraft-story. 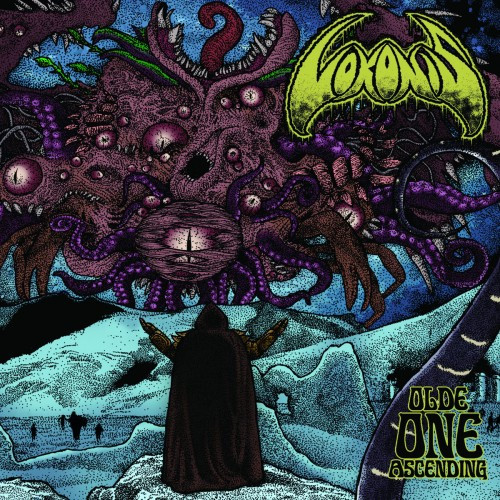 Can you tell the story of one particular song from the album?

Yes, sure! “Hazmat, The Ashen Rider” is the culmination of the album’s story. All of the previous songs describe the land and setting. Hazmat kind of serves as the catalyst for the end of the world. Summoning the previously mentioned Olde One to bring destruction to the world.

Simon, there are a lot of quite professional stoner doom bands today. How do you see the features of Vokonis that distinguish the band from others?

I don’t know if we do. But I hope that if it’s something we bring to the table, it’s that people notice that we do it all for the love of it. That we just try to make music that we love to play live and to play with other bands.

What make you proud of the Olde One Ascending album?

The thing that I’m proudest of is how we all got together with this vision and pulled it off. It sounds like we wanted it to sound. And of course I’m really proud of my own effort in the singing booth, as it’s my first experience as a singer.

How did you get in contact with Ozium Records? Do you have a contract for the next album or something?

Ozium Records got in touch before we started recording the album and signed us right away. They have an option on our next album.

What are your plans for gig activity in 2016?

We’re a young band, we only started playing live in December 2015. But we have already played about 8 shows this far. We want to play just as many or more in the next half. But we also want to take time writing songs for the next album, which we might do this summer.

Really? What will this album be about? What is its concept, both lyrically and musically?

We are still working it out. But anyone who liked the themes of Olde One Ascending will not be disappointed. That, we are sure of.

This is our baby, you know? So we want to treat it with care and have fun. We want to release another album in a year, play more shows, and just get out the album to people.

Thanks for your answers Simon! That’s all for today, Do you have few more words to spread Vokonis’ will amongst our readers?

Thank you so much Aleks! Stay in touch and follow us on our Facebook for the latest. We always have something happening so it might just be worth it!