Today marks the joint release by Russia’s Satanath Records and Metallic Media in the U.S. of the new album by the Brazilian horde Coldblood, and we are privileged to be the carriers of this vicious plague through our premiere of a full album stream.

Coldblood’s roots extend into the now-distant past, with their first demo appearing in 1992 — though their second did not see the light of day until 2000. Another demo followed in 2005, and then the band’s debut album Under the Blade I Die arrived in 2007. The intervening years since then have seen the release of a second album (2013’s Chronology of Satanic Events) and a handful of short releases. On this new album, Coldblood deliver 13 tracks, including three instrumental numbers that bring the album to a close. 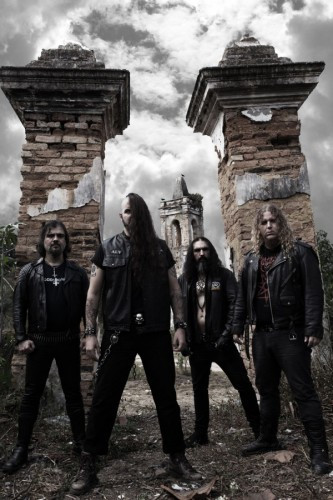 There is no need to remind serious students of death metal about the powerful contributions of the Brazilian underground. Names like Krisiun, Rebaelliun, and Abhorrence (not to mention the more death-leaning records of Sarcófago and Sepultura) resonate and demand respect. Coldblood’s name may not yet be as widely known as those illustrious groups, but on this new album they more than hold their own within the rich tradition of Brazilian extremity.

The music is a blasphemous scourge of deep, grinding riffs that whirr like bone saws and jolt like pile-drivers cracking pavements like ice, propelled by a jet-fueled drum attack that keeps the energy in the red zone, even when the band depart from their usual high-speed barrages and deliver ghastly mid-paced soul-reapers. Coldblood join skull-clobbering grooves with an array of dismal, morbid melodies and a mix of noxious, gravel-throated roars and hair-raising shrieks. And throughout, the music generates an overarching aura of malign, infernal ferocity and sinister, supernatural peril

This is also high-grade headbang fuel, with plenty of bounding, bolting, darting technical flash to keep your adrenaline levels elevated — including bursts of searing, scintillating guitar solos that swoop and dive like demon bats on fire.

I have a lot of favorites on this voracious beast of an album; to mix my metaphors, there really aren’t any weak links in this chain of destruction. But if I had to recommend representative samples for you, I’d pick the one-two punch of “The Synchrony of The Cursed Star” and “Cocoon of Neophyte”. But seriously, don’t stop there. This is a hell of a hellish ride all the way through.

To order the album in a limited edition jewelcase CD edition with a 12-page booklet, or to get a digital download, visit this location:

3 Responses to “AN NCS ALBUM PREMIERE: COLDBLOOD — “INDESCRIBABLE PHYSIOGNOMY OF THE DEVIL””