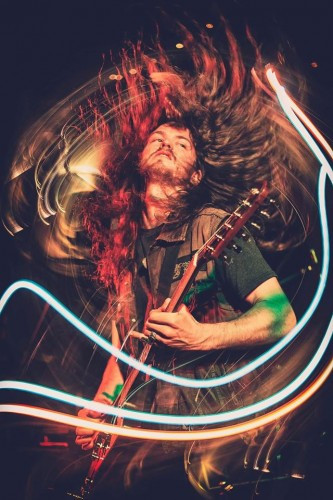 Brandon Marcey is the hairy man from Richmond, Virginia, who successfully combines work in two cool bands at the same time. He has played guitars in misanthropic sludge stoner doom cult Cough since 2010; and the band just released their new long-awaited record Still They Pray on Relapse Records. And besides that, he plays guitars and sings in wicked psychedelic doom outfit Sinister Haze, who finished their first full-length album just a month ago; you can find it on CD due to STB Records’ efforts.

It was difficult, but I believe that we managed to balance Cough and Sinister Haze stories here in one interview.

Hi Brandon! And thanks for your time!

Thank you Aleks, for your interest and time.

Firstly, I’d like to start with only Sinister Haze questions, but I can’t avoid this one. How did you start it? I’m asking because you already have had the opportunity to express nearly the same feeling through Cough.

On the surface it may seem that way, but both bands, while sharing a similar artistic aesthetic, are entirely different, as well as my roles in the two projects. Cough is slow, suffocating, and intentionally the heaviest thing the 4 of us can imagine. The Haze is a relentless psychedelic trip. A heavy band, but different, and being that I sing and play guitar also, there is way more of an opportunity for expression.  I tailor my sound and mode of expression uniquely between the two.

Is it difficult to switch your efforts from Cough to Sinister Haze and vice-versa?

At first, only because I hadn’t been in 2 projects before. Through practice, as it goes in most endeavors, you develop your mind to adapt and put yourself in a separate head-space altogether.

Did you have difficult moments when you were tearing between two bands as you needed to decide where to put some groovy riffs or piercing solos?

Ha, a fun question, but no, the songs and riffs I contribute to both bands are thought out or appear organically at practice. 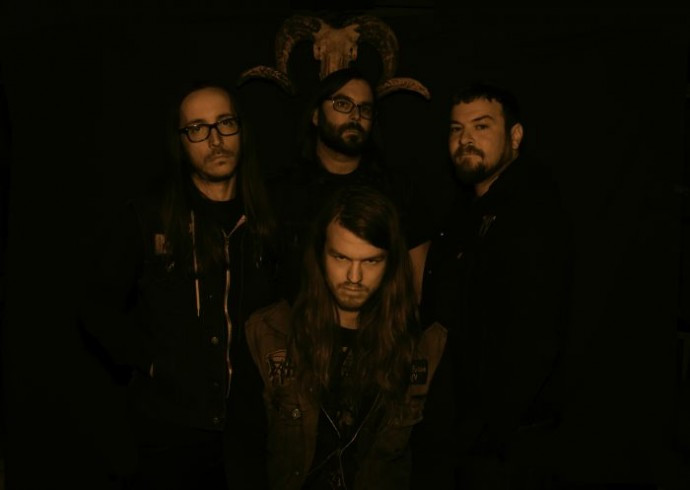 Cough became a sort of cult band. How do you see it from the inside – what hooks people the most?

We are a cult band. We’ve been offered the bigger tours with shitty bands, but fuck that. We don’t want to put a Cough fan through that kind of bullshit. School of Hawkwind.

On the 3rd of June, Relapse Records released the third, long-awaited full-length of Cough, Still They Pray. I know that you joined after Ritual Abuse was finished, but anyway, why was the break between these two albums so huge?

For the record, I joined Cough in 2009, literally the following weeks after they finished recording Ritual Abuse. I had just moved to Richmond from the mountains of Virginia, and truthfully, they took a chance with me. I was 22 and a real shithead. Haha. As for the 6-year wait, Life man.

A couple of the guys started families, some of us were up to no good, and I don’t think any of us thought it would take this long, it just did. If it were to have happened any sooner or later it wouldn’t of happened the way it did. Still They Pra”, if anything, is a true representation of the focus between Cough, Jus and Garret. Capturing that moment in time and delivering an honest record.

Some people reduce Cough’s main idea with two words – misanthropy and sin. How much of these two components is in Still They Pray?

Not as much… This album is much more focused. It has a lot more to do with accepting death and the frailty of life.

Brandon, what are your personal achievements on this record? I’ve heard “The Wounding Hours” – it’s beyond all words! Just damned bloody killer! And those organ parties are something unreal.

Jus played that organ track, taped a key down, and got as heavy/moody as possible. It’s fantastic. “Shadow of the Torturer” the whole way through; that was fun because it’s essentially an improvised jam. We found some lost recordings while going over material before tracking the album and none of us had any recollection of this forgotten gem. So, to stay true and natural, we went for it in the studio just the same. One take, zero practice.

The noise track behind the acoustic guitar on “Still They Pray” is a highlight… I was also high on acid tracking that. 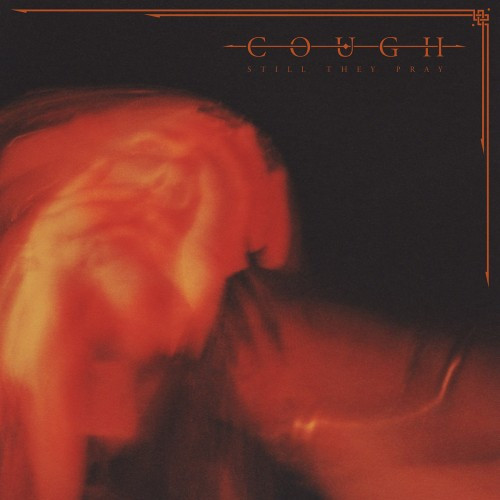 Jus Osborn is the producer of the album — how did you communicate with him? How did this recording session go?

When Cough went to Europe for the first time, we toured England and played shows out in the countryside. Electric Wizard came out to party and we hit it off.

Two years later Jus invited us to play his curated event at Roadburn. A few years after that we were doing an album together. It’s become a great friendship… Tripping on acid, burning spliff after spliff, jamming Hawkwind, Jacula, and Amboy Dukes… Good times and great people.

Speaking about your band Sinister Haze… At first Brandon Malone was a vocalist in the band. Why did you decide to take his duty?

It’s a feeling like performing hari-kari on one’s self. What a good singer, man, and father. It’s a very painful thing to do… Brandon is very talented, but over the course of that first year it was evident that the jams/psychedelic freak-outs were getting longer, and having a front man/lead singer wasn’t really working in the way the songs were growing. Art is not meant to be hindered, and, to quote Alejandro Jodorowsky, needs to be treated like a sacred sacrifice.

We also gave Sam a microphone and found out the dude can sing his ass off. In the new line-up everyone sings.

The Sinister Haze debut full-length Laid Low in the Dust of Death has a pretty dirty, nearly nihilistic sound. How did you see the sound concept of the band when you started it?

You nailed it Aleks, We started writing songs, simply structured, trying to blend Blue Cheer and Saint Vitus with a twist of everything that inspires us.

The Stooges, especially the album Fun House, have been a huge influence from the beginning. There is an early interview with Iggy and David Bowie where they talk about how The Stooges sounded like pure nihilism. We are an intense psychedelic band, and given we knew time was limited… better to be wild than tame.

By the way, what is the general message of Sinister Haze?

It’s music for the people out there getting high and scraping by. Songs of addiction, love loss, and spirituality. Not a band of or for junkies, but an honest message that reflects the heavy realities of life.

The album’s vinyl edition was released on May 7th by STB Records. What are your plans for promo tour, or do you plan one?

We are getting things together for a short tour of the east coast early fall. Europe and the rest of the US is on the table for next year.

How long did you compose and record these songs? Are there any sketches left from that recording session?

We recorded in the Appalachian hills of North Carolina with Chad Davis (if you’re unfamiliar with this man’s work, go listen, it is a very impressive catalog of psychedelic, doom/black metal, and experimental music). In the same house, U.S. Christmas’s Eat the Low Dogs was recorded.

We had only 3 days to do it, so we acquired as much weed and speed as possible and cranked it out like fucking maniacs. No B-sides or anything, because we knew exactly what we wanted to do leading up to it.  I very much enjoy the unique experiences had in an absurd recording environment. A house for Laid Low…, Cough’s Still They Pray was tracked/mixed in a damn garage. 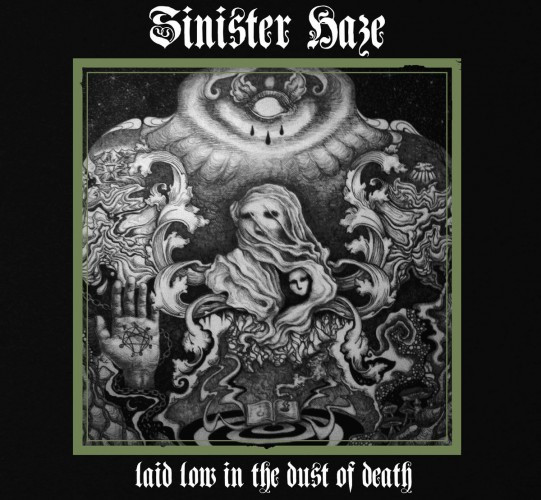 What kind of obstacles did you meet working over material for Laid Low in the Dust of Death?

Well, I guitar tech’d for Wino on the Spirit Caravan 6-weeks reunion tour, and that was just a few months before recording. The first version of “Same No Good” was written in my head on the van rides, literally slapping hand on knee in rhythm and going over parts in my head. Lead on was written remarkably during the first practice back from that caravan tour.

At one point during the recording I went sort of homeless, sleeping in the practice space for a bit…  worked a crazy landscaping job for awhile but had to get out. The whole crew was made of insane heroin junkies/ex cons. Being the creative stoner type, I entertained the whole thing for awhile, then the Haze toured that winter and I never went back.

Some things this guy on the crew said, no shit, his name was Blackberry Brown, I’ll never forget though, and he has been a form of creative inspiration in some fucked up way.

Do you see lyrics as an important part of Sinister Haze? What do you prefer to write about?

Lyrics are huge in any band, and really the most challenging part of the song-writing process. I’m drawn to literature, poetry, surrealism, and many other artistic mediums; there are many powerful forms of inspiration.

In the early stages it’s hard not to write in the first person, another thing that takes practice. Over time, though, you start riffing and telling a story. “Tears of Lillith” is a reinterpretation of the Clark Ashton Smith poem of the same name. Smith was Lovecraft’s biggest pen-pal; they wrote an astonishing amount of letters to one another. Dark metaphors are a lot of fun to play with.

“Shot Through Darkness” is a cool name for the song. What’s it about?

“Shot…” and “Chains…” were the first songs written after becoming a 3-piece.

“Shot Through Darkness” is a song about a drug deal gone horribly wrong; if you follow the lyrics you hear the story.

“Chains to Dust” is about addiction/spirituality. Addiction can feel like chains, holding you down and locking you to the floor. Your mind is the only real tool to combat this power, and with enough mental tenacity you can shatter those chains to dust.

Thank you for your time Brandon! I see that we have had a great interview, so thanks also for the energy you put into it! Let’s finish with a summing up of your plans for 2016, both for Cough and Sinister Haze.

Some exclusive live shows from both projects and to keep up with writing. There is a large amount of material that’s yet to been recorded, so yeah, it may take time but we’re not going anywhere.