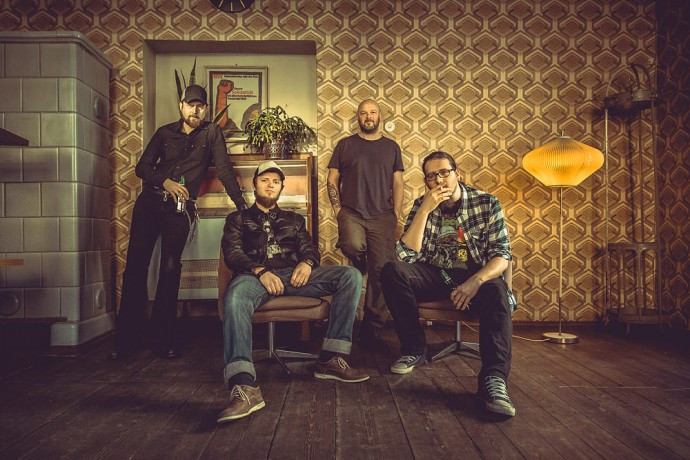 (Our friend Comrade Aleks delivers to us on a platter this entertaining discussion with two members of the German stoner-doom-hard-rock band Slow Green Thing.)

That’s right – slow, doomy, psychedelic or stoner-alike music. Heavy riffs, trippy solos, relaxed vocals, and a little bit muddy sound were incarnated firstly in an EP named simply I (2014) and in an LP named II (2016). Slow Green Thing are able to write catchy rocking tracks, and I like this sort of doom, so it was just a question of time to get in touch with the band and ask them a few vital questions.

Hey Aleks, we are fine, thanks, waiting for the next shows and practicing new songs, so you guys can enjoy some heavy riffs.

Well, we will try to be short… when the time of Sven’s band Burning Motors was over, he decided to rock on. So he was thinking about a new band and started to search for some cool dudes with passion and groove. After 2 years of trying and crying with different people, the band was finally formed in April 2013, when Andreas (ex-member of Hammond Eggs) joined the band to support Sven on guitar.

Some months before, Jörg (a common member of Red Wave and Fyretyre) took his place behind the drums and Kay (ex-member of Feet First) became the man with the big strings.When Kay quit the band, we found Conny and we are very happy with him.

A cool gig was the show at Stoned from the Underground in 2014 – a dream for every “Stoner-Rocker”. Also very important was our EP in 2014. Furthermore, our joining the Fuzzmatazz Records label – the last important thing happened to us. So now, after releasing our LP II, let’s see what it will bring for us. 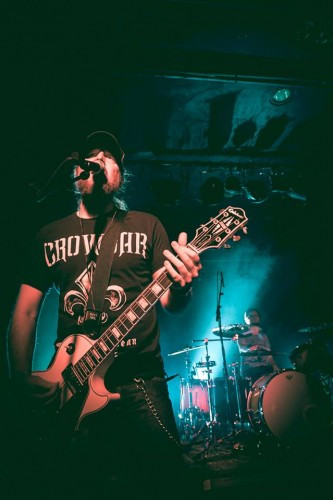 What kind of meaning did you put in band’s name? What did you want to transfer through it?

We want to transfer absolutely nothing with this name 😉 It was a crackpot idea – we preferred the name “ooze” because it made the Teenage Mutant Ninja Turtles mighty — but 1,000 other bands like this name too. “Ooze” is a green slime. Once our former bass-player said, a little depressed, in German: “lasst uns doch einfach langsames, grünes etwas als namen nehmen!” (Let’s take a name with words like slow green something in it). So the quick translation of this monolog is finally our name – SLOW (langsames) GREEN (grün) THING (etwas).

Nice story! But why didn’t you add that on the artwork of your debut? You have an angry rhinoceros there instead of something Green and Slow! What does the rhino personalize?

Because it would be much too easy 😉 Or maybe it is just much too hard to give the “slow green thing” a face. I wanted more unexpected things — animals are good to describe things with their properties… The rhino should look like a battle rhino from Masters of the Universe, similar to He-Man’s battle cat, you know? And it stands for the songs on II – powerful, mighty, angry, and strong. 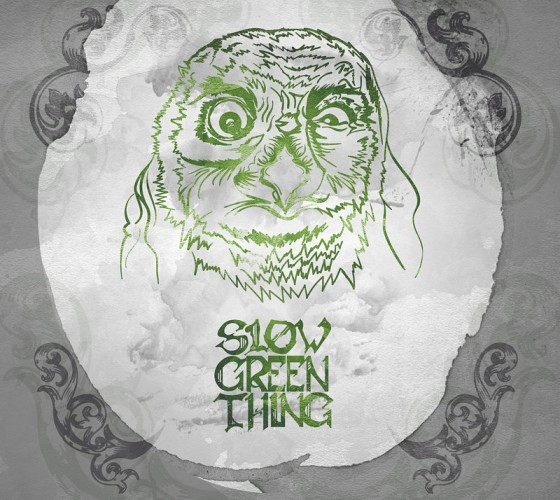 Man, what happened with that crazy owl from your previous EP?

Do you mean the artwork of our LP? Well, it was stumped by the rhino – it is a new decade – that is what the killing scene on our cover shows. We ended up with some old sounds, the common thread became more concrete, and our music matured from I to II.

Your debut full-length album II was recorded at Virtuose Vibes Studio Dresden in 2015, but you released it only now. Why did you wait so long?

The recording started in November 2015 and took about 8 weeks (with breaks because of f***ing work), including the mixing – so actually it was very fast. Most of that time, we were waiting for the LP, because the record company needed over 5 months to produce the vinyl. 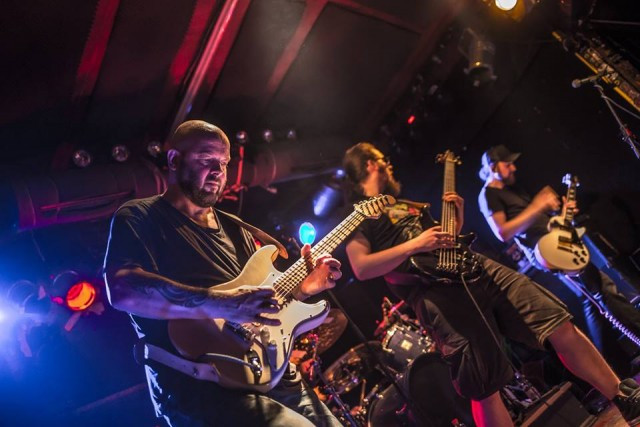 Five months is a long period. Are you still satisfied with the album? How many things would you like to change in it?

Jörg: Personally, I’m quite satisfied. Some small things could be better (like more punch, doomy, and lower drums, maybe more lower tunes in the end mix/master, too), but it’s my personal opinion and feeling. For the rest, this is till now the greatest record I’ve ever done with my bands. And it’s also good to have some options to do it “better” next time, so we can gain the quality and beauty of our tunes in the next record.

By the way, you released it in a DIY way, as it was with the first EP named I. Don’t you want to find a label for it?

We actually found a label – Fuzzmatazz Records 😉 But for our first EP we didn’t really need a label and promotion. It’s a past thing, people still like it, and it goes around the world. So if someday we decide to produce some more copies of the EP, we will look forward and so do it through a label. Maybe!

The album starts with a ten-minute-long track, “Bucks & Fear”, with lyrics that touch social problems, something unusual for stoner doom bands. Why did you decide to pick up this theme?

Jörg: Hoho – you listen to lyrics – unusual for a stoner-rocker 😉 – (just kidding) . The lyrics echo Sven’s thoughts – the reign of bucks and fear in this world is a fact that really makes Sven sad and angry.

Which songs represent the best of Slow Green Thing on this album? Why did you choose this one?

Jörg: Every single one – Sven creates most of the riffing parts and he listens to a lot of different music – so Slow Green Thing, in the end, is mixing different influences from grunge to doom and back. Sometimes even within one song. But every song in the end is SLOW GREEN THING and it becomes more and more a typical SGT style created by mixing hard and melodic riffing and the way of singing. 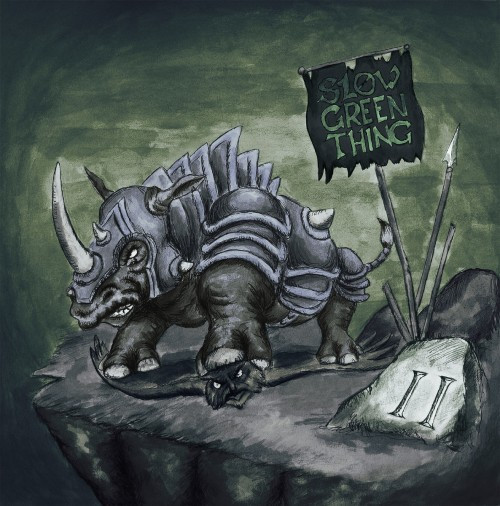 How do you see the stronger sides of this record?

Jörg: First, it’s important to know WHAT the stronger sides are. I think we have some songs with a complex and not ordinary structure. Also we have very long songs, where we have time and the possibility to do some nice, fuzzy, and extravagant arrangements.

And another very important side of SGT are the non-typical guitar solos of Andreas. I mean this mate has a long musical background; he has partially different influences and his own style, which is not typical in the current stoner doom scene. But it fits very well, and we are more than lucky to rock with him.

On the other side we have the classical heavy rock riffs from Sven, which builds the base of all the music. So in the end there is a nice heavy doom mix with some fast and classical guitar solos, embedded in a fat and heavy bass and drums basement. 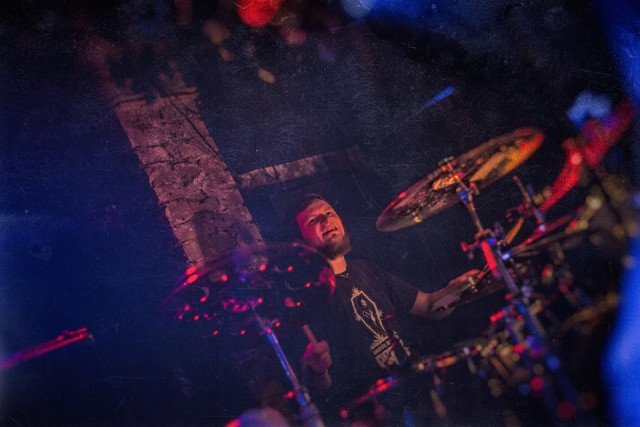 What is your overall message that you bring with the band?

We do music, because we love to do it! At first, we do it for us and we do it the way we like it. We don’t want to transport a special message — it’s just about the music and playing hard rock.

You’re from Dresden. How much of Saxony is in you and your music?

Maybe the brutality of the old Saxon folks 😉 – for serious, our origin is not an influence in our music.

Okay! Thanks for your time mate! Those were the last questions. I wish you all the best on your way with Slow Green Thing.

Jörg: We want to thank all our fans and dudes around the world who already support us and maybe will support us in the future. According to our statistics, we have a similar fan base in US (according to the EU), and that makes us happy.