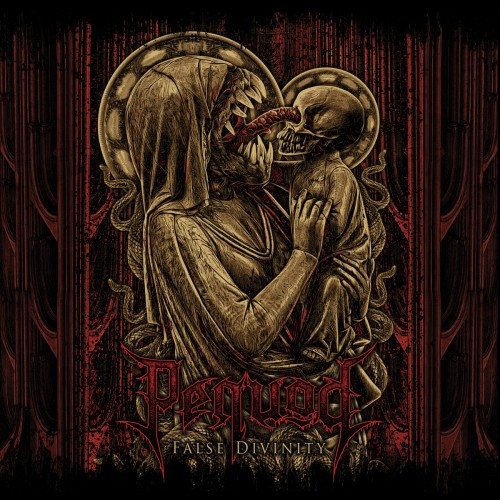 “Explosive” is a good one-word summary of False Divinity, the new EP by Germany’s Pequod that’s set for release on July 5th. “Vortic-Death-Thrash”, which is the band’s own label for their music, is accurate, too. It is indeed a vortex of skull-crushing death metal and electrifying thrash, and as you’re about to find out through the full stream in this post, it includes other qualities that make it a lot of vicious fun to hear over and over again.

If you’re new to this band, we’re told that they first came to life in early 1998, and since then they’ve released a pair of demos, a self-titled EP in 2004, and a debut album named Forgotten in 2011. And because they chose the name of Captain Ahab’s whaling ship for their own name, Ahab can’t be considered the only German metal band with an affinity for Moby Dick. 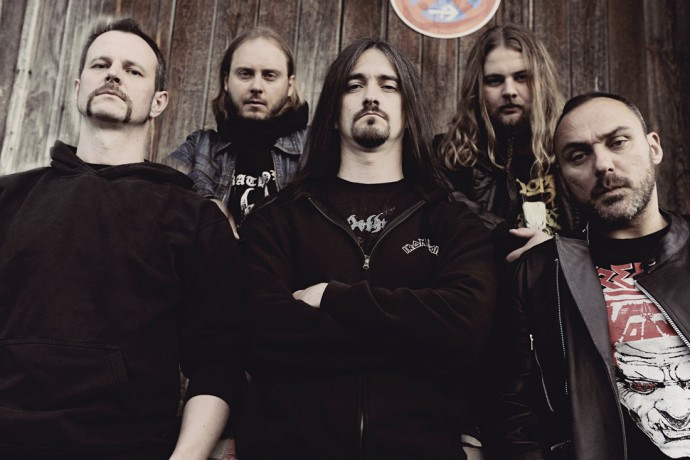 “Malicious Joy” is the name of the EP’s third track, and it’s easy to imagine that’s what Pequod were feeling when they wrote and recorded these four songs. They’re loaded with massive, jolting grooves and infectious riffs that jab, swarm, and slither like vipers. And while the music does include plenty of thrashing gallops, the songs are very dynamic in their rhythms and tempos — you’ll figure that out soon enough in the title track: About halfway through it down-shifts into an absolutely skull-clubbing stomp. And the start-stop pile-driving that surfaces in “Flaying Demon” (and elsewhere) is powerful enough to knock you off your feet.

Roland Wagner’s vocals are also dynamic in their range, and utterly savage throughout, while the guitar tandem of Daniel Kirstein and Jens Burbaß churn out one galvanizing riff after another, along with an array of sinuous, seductive melodies and solos that go off like fireworks or glide like swamp mist. And thanks to the top-shelf production, the music hits with tremendous power and clarity.

Both in the song-writing and in the performance, this really is a gem of an EP, and a huge and welcome surprise from these German marauders.

Pequod have commented about this new EP as follows:

“We spent a lot of time (especially Danny), money and effort into our equipment. Everyone in the band knows how Pequod has to sound live and that´s the sound we wanted to capture in the studio. You should be able to play your songs in the same manner and with the same sound, as on a studio recording. So over the years we got to know what we wanted, neck-breaking but clear guitar sounds, in your face vocals and pumping drum sounds. Even the bass came out pretty nice on this recording, especially on the title track itself.

“The mixing was done by Fredrik Folkare (Unleashed, Necrophobic) and to work with him was an honour and a big pleasure. Danny did a lot of research over the past years, where we finally found out that Frederik with his way of natural mixing would match perfectly with us. And the result, in our opinion, is very satisfying. Even with his first test mixes he was close to the sound we wanted to have, so the guy had the right feeling for our music — what is good to know. The mastering was done by Peter in de Betou (Meshuggah, Opeth, Amon Amarth, Hypocrisy and many more). These two masters really made our sound like we wanted it from the beginning.

“The whole recording process was very relaxing with no stress, as we did not have a real time slot. We took our time and we always will work like this, as we do not want to listen to a record after a couple of months and say, we should have done this or that, or we don´t like this. A record is always a capture of a moment, and this moment will last on the CD, so you should like it from the beginning.

“So the writing and recording of it has been a big pleasure for all of us, but the best thing is to play the songs live in front of a headbanging and moshing audience — that´s the reason to make music for us.”

Of course, not all of us will get the chance to hear these songs performed live, but you definitely get that spirit and energy just listening to the EP.

As mentioned above, False Divinity was mixed by Fredrik Folkare (Unleashed, Necrophobic) at Sweden’s Chrome Studios and was mastered by Peter In de Betou (Meshuggah, Opeth, Amon Amarth) at Tailor Maid Production in Sweden. Not surprisingly, it sounds great. It also features eye-catching cover art and design by Remy C. at Headsplit Design in France.

False Divinity will be available July 5th as a FREE Download via the band’s website. To order physical editions, visit these locations: