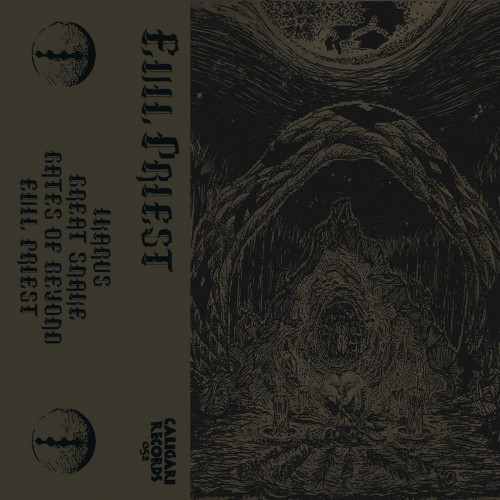 Caligari Records has unearthed yet another underground gem, this time excavating the self-titled debut EP of Peruvian death-bringers Evil Priest from the dank pit of abomination where they dwell. In advance of the EP’s release later this week, we have overcome our fearful cowering in the face of this monstrosity and deliver unto you a full stream of its four tracks.

The opening number, “Icarus”, is the only part of the album that doesn’t try to maim and dismember the listener. Though not as violent and horrifying as what comes next, “Icarus” is still unsettling, an eerie collage of rushing wind, bird calls, chimes, and an exotic melodic chant that together function as a foreboding meditation before the storm breaks.

The three tracks that follow deliver a wretched fusion of black, death, and thrash metal, with an atmosphere of barbaric savagery and supernatural terror, generating a dismal sonic miasma that comes not from muddy production but from the band’s lethal songwriting strategies.

The ingredients are familiar, but the music is no less galvanizing. Part of its appeal derives from the band’s dynamism: They turn on a dime from moaning, groaning death/doom to electrifying displays of ravenous ferocity, from mid-paced flesh-gouging and up-tempo bounding to barbaric assaults launched with malignant, whirring riffs and head-battering percussive thunder.

Evil Priest also have a penchant for spearing the cathartic climaxes of these songs with banshee-shrieking, whammy-bar solos. The abominable vocals also match the dynamism of the instrumental music. With a cavernous quality heavy on the echo effect, these roars and howls are as ghastly and ghoulish as this kind of morbid and merciless supernatural assault demands.

So, get your game face on — and prepare to have it mangled and mauled by what you’re about to hear.

Evil Priest will be released on July 14. To pre-order it, go here:

6 Responses to “AN NCS PREMIERE (AND A REVIEW): EVIL PRIEST (SELF-TITLED EP)”