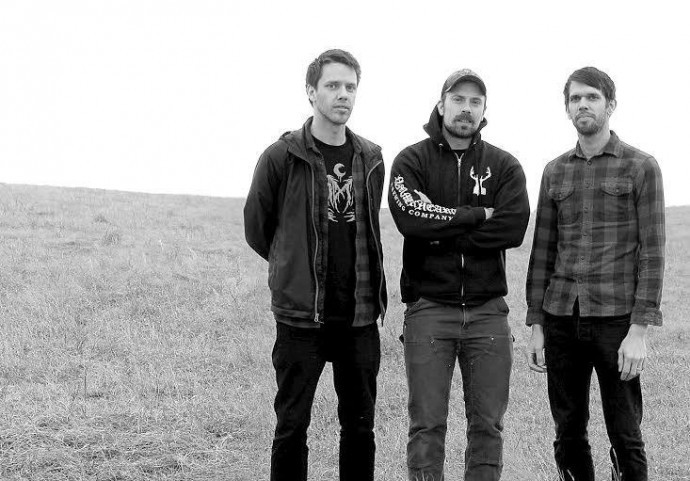 (In the glorious 75th edition of THE SYNN REPORT, Andy reviews the discography to date of South Dakota’s Woman Is the Earth.)

Recommended for fans of: Agalloch, Wildernessking, Wolves In The Throne Room

Hailing from Black Hills, South Dakota, Woman Is The Earth deal in a brand of Black Metal that’s as heavy in atmosphere as it is in aggression, with songs that meld writhing riffage and rolling drums with passages of acoustic contemplation and ambient meditation, all without falling prey (in my opinion at least) to the more generic tropes and clichés of the over-saturated “Post Black Metal” scene.

They do this by never forgetting that – unlike some of their more populist peers — they’re definitely, even defiantly, a Metal band at heart… and a Black Metal band at that… so their music is never in danger of pandering to the notions of bland accessibility or pretentious artistry which undermine so many other acts of this type.

Having released their latest (and greatest) album earlier this year, and with the recent demise of Agalloch still weighing heavy upon so many of our hearts, now seemed like an opportune time to expose our readers to the band’s particular blend of grim grandeur and metallic majesty! 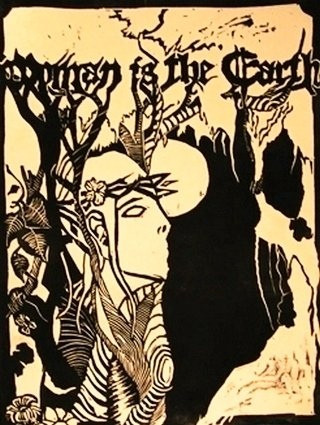 Four tracks and thirty-five minutes of music, that’s what you get with Woman is the Earth’s first release, Of Dirt, kicking off with the rolling thunder and roving anger of “Beneath the Melting Sun”, which introduces the listener to the band’s signature style in seven-and-a-half minutes of raucous, thrumming riffs and contemplative acoustic intermissions.

Shorter, sharper, and more savage, the winding tremolo riffage and scathing screams of “Withered Fields of Grain” mix malice and melody in equal measure, Jon Martin’s drums powering and propelling the song forward with near reckless abandon, after which the calm, acoustic introduction to “Skeleton of the World” is something of a distinct (and welcome) change of pace.

The song soon gives way to some far heavier, doomier riffage, however, all low-toned, clashing chords and vast, spacious pauses, with the three-piece eventually weaving in a touch of suitably dark and dolorous melody into the proceedings, even as the vocals plumb ever harsher and more guttural depths.

The second half of the track is a complete about-face, however, suddenly transforming into a torrential assault of blasting drums, scything Black Metal guitar work, and pulse-quickening shrieks (interwoven here and there with a series of wordless, melodic chants which add both contrast and colour in equal measure), before finally finishing in a more expressive and atmospheric manner that ties in, subtly, to the song’s doom-laden opening.

The album’s finale, “The Dark and Damp Forest Floor” begins as a wholly solemn affair, sweet melodic notes ringing out over a backdrop of rushing water and distant birdsong, though this is merely the calm before the storm, as before too long it erupts into a fiery blaze of ferocious riffage and raw-throated screams, eventually building to a moody, evocative acoustic interlude and followed by a subsequent return to driving, storm-drenched blackened tremolo for the song’s (and the album’s) ultimate finale. 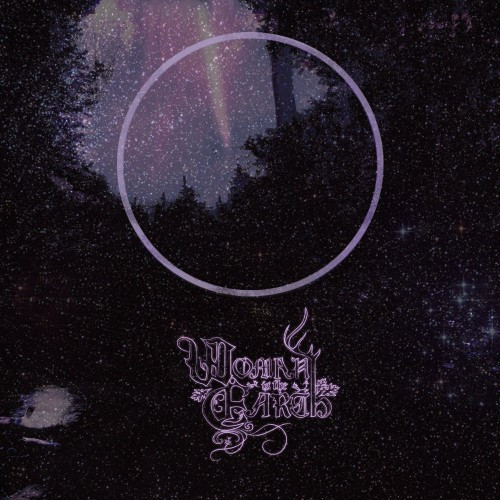 THIS PLACE THAT CONTAINS MY SPIRIT – 2012

The band’s second album is a big step up in both ambition and execution, not to mention production values, beginning with the 10+ minute title-track, which immediately (well, almost immediately) displays the newly sharpened guitar tone and refined drum sound the band have developed in the years since their debut.

Palpably anguished and aggressive, yet not without nuance, the song incorporates moments of calming clarity and morose melody in amongst the filth and the fury, the combination of these elements producing a sense of magnetic atmosphere that goes above and beyond all the dissonance and distortion.

“Bird Song” is far more savage than its name might suggest, unleashing an almost unrelenting cascade of bristling, blistered riffs and feverish blastbeats over the course of its 08:42 run-time, intercut every so often with a more dolorous and doomy section of solemn introspection, before finally transitioning into the rough-hewn riffs and textured atmospherics of the mammoth “Sage Moon” whose rich veins of bleak melody practically pulse with a dark and cryptic energy that runs right down to the bone.

The album concludes with the humongous “Glow Beyond the Ridgeline”, sixteen minutes of black, shining melody and searing intensity that swirls and sweeps and soars through multiple motions and movements, underpinned by a brace of subtle, progressive touches and propelled by a veritable fountain of roiling, apoplectic drum work, eventually culminating in a brooding, minimalistic ambient outro that slowly dissipates into silence. 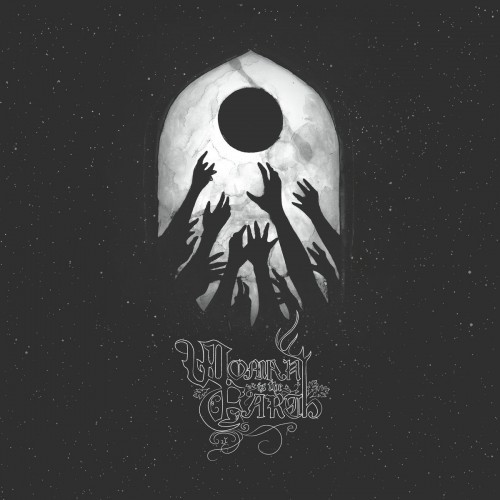 At only three songs (and just under 25 minutes) in length, it’s definitely debatable that Depths is better classified as an EP than as a full album, but whichever way you want to categorise it, it’s still a thrilling listen, not least on spellbinding opener “Crown & Bone / Dreamer”, which artfully melds the cold, unyielding anguish of raw Black Metal with touches of drifting, dreamlike atmosphere , without ever losing cohesion or weakening the song’s firm metallic foundation.

If only all so-called “Post Black Metal” sounded this vibrant and vital!

Intricate instrumental “Lifted” is up next, demonstrating a far more overtly melodic and meditative vibe which displays prominent influences from both early Ulver and classic Pink Floyd, and which seems, unlike most instrumentals, far too short for my liking.

That being said, as much as I’d be happy to listen to several more minutes of “Lifted”, “Child of Sky”, the third and final track on Depths, simply refuses to be ignored, beginning as a morosely majestic piece of wordless melodic chanting which ultimately transforms into a hypnotic, stream-of-consciousness display of slow-burning angst and sudden explosions of fiery aggression.

The band’s latest album is, in my humble opinion, one of this year’s most underrated and underappreciated. Though arguably a touch more melodic and restrained than the more rough and ready nature of their earlier work, the purity and clarity of both the production and the songwriting infuse every track with a weight and a presence all their own, and it should only take one listen to the resplendent “Brother of Black Smoke” (following evocative intro track “Triumph of the Sun”) to realise that there’s something very special about this record.

Powerful yet poignant, resonating with its own earthy rhythms and an urgent sense of catharsis, “Brother of Black Smoke” shows Woman Is The Earth really ascending to a new level, stepping out of the shadows of their influences and smoothly separating themselves from their peers in the process. Brimming with sublime ambient touches and a sense of enigmatic atmosphere, the gnarled and whorled grain of the guitars and the effervescent quality of the song’s gorgeous melodic tones really helps illuminate the band’s expressive and progressive style in all its glory.

Follow-up “Broken Hands” initially takes things in a harsher and heavier direction, though one still intertwined with twisted branches of dark melody, releasing a rushing cataract of gloomy riffs and clattering drums which eventually carries the listener to the song’s more intricate and nuanced mid-section, where the track’s early aggression tapers off in favour of a more melodic, doom-tinged collection of brooding riffs and sombre, soaring leads, finally culminating in a gorgeously archaic acoustic outro.

“Sorrow and the Floods” overall tends towards a more proggy and atmospheric approach (with every instrument given ample room to breathe and flow), though it’s not above the occasional explosion of pure, blast-driven intensity, not least as it builds towards its breathtaking finale, while the title-track – “Torch of Our Final Night” – positively crackles with galvanizing energy, with even its most ambient and melodic sections providing only a momentary pause amidst the track’s boundless rush, before the album finally wraps up with the weather-beaten glory and grandeur of “Lungcrusher”.

It may have gone by a little underneath the radar, but you’ll end up kicking yourself if you let this one pass you by.

5 Responses to “THE SYNN REPORT, PART 75: WOMAN IS THE EARTH”