(Austin Weber steps up with this week’s Rearview Mirror feature, focusing on the 1995 debut album by Candiria.)

It’s been far too long since I contributed to our Rearview Mirror series here at NCS, and there’s still an endless number of old and forgotten gems I’d like to cover in this series when I have more time! If you’re ready to step into the time machine for a lesser-known gem by Candiria, come prepared with an open mind. This isn’t easy-listening or genre-by-numbers material. You ready for some supreme weirdness?

Brooklyn-based and never content to confine themselves within a single genre, Candiria have always created the music they want to make, critics and fans be damned. The band have had a long and storied history ever since their inception in 1992, going through multiple styles and sonic territories on different releases, a myriad of line-up changes, a tour-van-related crash tragedy that shook the band to its core, and a couple of breakups/hiatuses followed by multiple comebacks. Recently the band returned with 2014’s Invaders two-song release, and are set to release a new full-length next year. So it seems quite fitting to cover their initial album, Surrealistic Madness, in light of the band’s newly re-activated status. 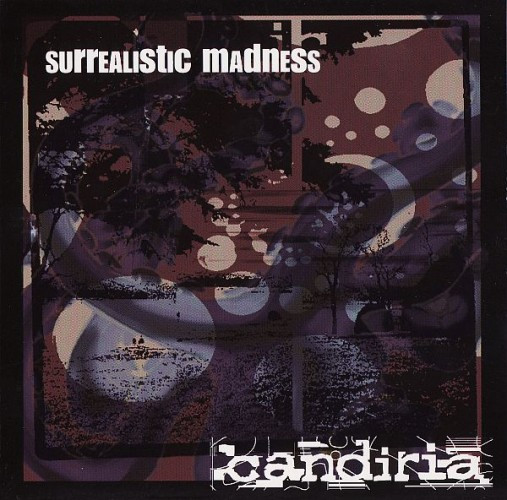 While I had been familiar with the band’s music for many years before purchasing 1995’s Surrealistic Madness, little did I know just how truly incredible the music on this album was upon purchasing a used copy from a local shop about seven years ago. I bought it partially based on the strange cover art and the title, but also because for all the praise many of their later albums have garnered, I’d never heard much of anything about Surrealistic Madness. Not even from fans of the band.

I find a lot of things very special and noteworthy about this album, especially within the context of how it charted a visionary sonic blueprint that the band would carry forward in much of their music after this. Most notable is its mercurial way of combining unlike sounds into a bizarre fusion that somehow works, but also for the groovy death-metal influence throughout Surrealistic Madness that’s unique to this record. Perhaps a lot of this has to do with this being the only Candiria record not featuring the band’s longtime guitarist John LaMacchia.

On this record, the guitar work was done by Chris Puma, who unfortunately passed away in 2009. He also helped write some if not all of their second full-length, though I haven’t found out concretely online whether that was his last performance with the band or whether his material was performed by John LaMacchia. While I am in no way saying John is not the impressive guitarist he clearly is, the point I always make to people is that so much of their riffing style early on came from the mold Chris Puma set on this album — to the point that two songs from this album (“Temple Of Sickness”and “Elevate In Madness”) ended up being re-used on their third album, The Process of Self-Development.

I also think Surrealistic Madness features the best vocal performance Carley Coma has ever laid down; his screams and growls here are unhinged and super-aggressive.

Likewise, jazz music has always been a strong element within Candiria’s sonic make-up, often showing itself most prominently in drummer Ken Schalk’s  percussive insanity. But what makes this album special is in how much of the record is devoted to jazz fusion segments and full songs in between the band’s unique style of death metal found only on this record. The collision of jazz fusion and death metal throughout this record is a special experience to behold. To be clear, jazz fusion elements can still be found in some of Candiria’s later works, but not to the degree of prominence within the music that is evident throughout Surrealistic Madness.

Unfortunately, Surrealistic Madness is a bit of an obscure item, as only re-released versions of it with different art and a changed track-listing can be easily found, as far as I can tell. In addition, it’s not available for stream/purchase on either the band’s Bandcamp or its Spotify page. In fact, you can’t even find the full album on YouTube. The few songs you can find on YouTube I’ve included below.

Depending on which version of the album you find, the track listing is different. The original 1995 copy I own, for example, contains two fantastic songs ,“Infected Wisdom” and “Observing Highways”, that later re-pressed and re-issued versions of the album do not include for reasons that don’t make sense to me, with the re-issued versions instead adding a song from their demo prior to this album (“Purity Condemned”).

For a band lauded for their experimental ways, Surrealistic Madness embodies everything people love about Candiria, but somehow it never got the credit and praise their later efforts have.  This is a record well worth seeking out if you like experimental and unorthodox metal.

3 Responses to “THE REARVIEW MIRROR (CANDIRIA)”