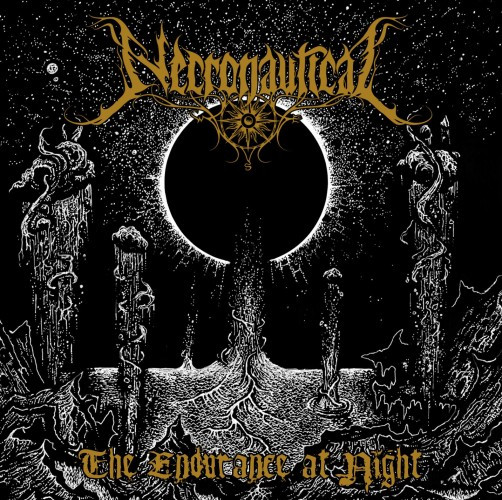 (DGR wrote this review of the new album by the UK’s Necronautical.)

Let’s lay all our cards on the table up-front here. I was very excited when England’s Necronautical announced a follow-up disc to their album Black Sea Misanthropy. I genuinely enjoyed the nautical-themed group’s debut full-length, and for a while was worried that they wouldn’t do another after they went radio-silent for a brief spell.

I was actually introduced to the band via a review of that album on this very site by our own Andy Synn. Though I am loathe to admit this in public, as the man’s ego hardly needs any more inflating, and knowing that he was right about a recommendation might just provide more reason for it. His homeland may not be sure what part of the planet it wants to be located on at this moment, but I don’t need it to literally float off the map via Andy Synn‘s head-shaped balloon.

Black Sea Misanthropy was a symphonic black metal disc and, as the name implied (as well as the band’s own name), it focused heavily on ships, the ocean, and the brutality involved in many of those sea-going adventures. It was at times thrashy, full-blown death metal, raging and teeth-bared symphonic death, and frustratingly catchy (look, years out and I still get chunks of “Ghosts Of Men” stuck in my head), so I had high hopes for the band to have a follow-up. The Endurance At Night is that follow-up. Released in the middle of July, it continues the band’s nautical explorations but manages to do so in a much more mature package, one that shares a lot of similarities with its predecessor but also comes off much more fierce. The two years between discs have given Necronautical enough time to come up with one hell of a record. 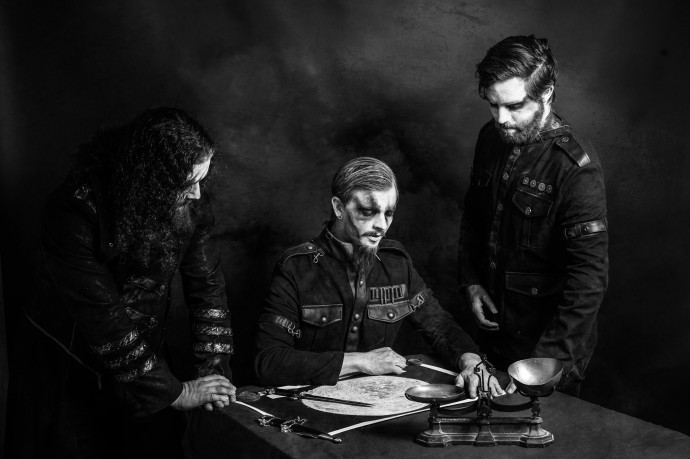 The Endurance At Night — like its predecessor — clocks in at a lean seven songs, tightly packed into fifty-two minutes of very sleek symphonic black metal. Every song on Endurance At Night clears the six-minute mark easily, with most falling in the six-to-seven minute range save for one epic song that clears ten. The four-piece band, armed with new drummer Slugh, have hammered away at the group’s formula and found a much fiercer, sharper, teeth-bared edge than what they’ve had before.

Their current press photos may portray them as a bunch of uniformed sophisticates, but the music they play is knife-edged black metal backed by a haunting symphonic crew. It’s dynamic, and holy hell is it quick; there are few moments on The Endurance At Night where the band slow down to take a breath, instead favoring an all-out battering of riffs and blasts. The first handful of songs are so white-knuckled that as the band accelerate to the midpoint of the disc at song four (“Oceanus Procellarum”) it feels like your skin is starting to burn off.

Openers “Pure Moon” and “Nihilarkitel” make for an excellent one-two punch to start off the proceedings of Endurance At Night. “Pure Moon” literally starts with a boom as the whole band launch into a whirlwind of sound at once. “Pure Moon” lays the foundation of The Endurance At Night, a song that has the band sounding massive from moment one. The track has every element of Necronautical poured into it, from a thrashier and quick opening to an ominous symphonic backing track, to a lead that almost drowns out vocalist/guitarist Naut at one point. The song is percussive, operating heavily on a thudding guitar rhythm before snapping back and forth between a quicker-moving gallop and a glorious blast segment at its halfway point. “Pure Moon” feels like the transition song between the infectious catchiness that was a lot of Black Sea Misanthropy and the fire-forged music that occupies much of Endurance At Night.

“Nihilarkitel” — which is the song for which the band made a music video — is insanely catchy, with a scratchy and ancient-sounding opening that quickly becomes a typhoon of guitar riffs on its own. The melody of the song is so tightly picked that it feels like the strings could break any moment when the band launch into the song’s lead section, which they do over and over again just to really make sure that it wraps its fingers around your brain and won’t let go.

Initially, “Nihilarkitel” was the song that really had me locked into Endurance At Night — almost dangerously so, as the song on its own is on its millionth repeat for me, so much that the back of The Endurance At Night felt like a bonus at first. To say that I am enamored with the drum hit that happens before the final chorus is to put it politely. I am very aware of its purpose in the song and I know exactly why it works. As the band build up to it, it functions like cannon fire, and I’d be damned if I said I couldn’t destroy the world after hearing it every time. “Nihilarkitel” is one of the songs on The Endurance At Night that makes time absolutely fly, and even at six-minutes-plus I would’ve loved to have more of it.

Often an album will tend to be front-loaded, but in Necronautical’s case the best music on The Endurance At Night occupies the spaces for tracks five, six, and seven. So while I’ve been focusing a bit on the front sections of the album with their lightning-fast guitar work, these are the moments when Necronautical aim for huge results in some monolithic song-forms, ones that make this four-piece group sound much bigger than you would be prepared for, the ones that truly live up to the ocean’s reputation for mass. While the opening half of Endurance At Night appeals to the “metal should be snappy” senses, the back half executes upon the storytelling part and makes each song into its own journey.

Necronautical may have done themselves a disservice with “Strom” and “Theia” because, if I had my way and the band were given infinite time for a set list, those two songs would be shoe-ins until the end of their career. “Strom” is the previously-alluded-to ten-minute epic and it truly is a magical beast. It appears late in the disc’s run-time, but the song is so strong that it has come to re-define Endurance At Night for me — shifting it from a snappy symphonic black metal disc, full of glorious power-choruses and huge blast-beat runs that could level cities, to one that truly feels like it is carving out a musical map for its listener.

“Strom” starts out quietly enough for its first couple of minutes but then launches into a scorched black metal riff that leads to some of my favorite screaming on the disc. Vocalist Naut turns absolutely shrill around the 3:25 mark, and it propels the song into the stratosphere. It’s a powerful combination of all the band’s different musical elements into a sound where everything is at eleven, and the whole build really gets the adrenaline rushing. The guitar solo that happens in “Strom” is also gloriously hammy, and I love it as it shifts gears into a sustained note section from the initial note-abuse. “Strom” is the sort of epic that you build an album around, and it seemed that Necronautical had done just that — until I hit “Theia”.

If “Strom” is the white-knuckle, knives-out, adrenaline-rush epic of the disc, then “Theia” is the beautiful funeral procession.”Theia” closes out the whole album and it’s as morose as Necronautical get on Endurance — going instead for the sweeping and dramatic approach this time. “Theia” is the seven-minute assembly and ignition of the funeral pyre upon which Necronautical launch Endurance into the night. The dual guitar sections of the song are undeniable, and Necronautical give the song plenty of room to breathe. The doomier take on their formula works incredibly well, and like “Strom” before it. could easily be slotted into a live set for the band from here on out. I imagine it would make a fantastic closer. It certainly does a fantastic job of that on The Endurance At Night.

Endurance is one of those albums where I get to go fetch my dead-horse-beating stick and go whack the old axiom of mine a few more times that this album is a very pleasant surprise. I had figured, given the band’s previous mark of quality, that Endurance At Night would be a good album, but what I did not expect was that Necronautical would excel on every front. Both of their discs are seven songs long, and Endurance At Night feels like an evolutionary step for those seven songs, as the band have knocked it out of the park with every track this time around. It’s a solid chunk of shrill black metal shrieking that rarely seems to slow down, and when it does, takes some of the best elements of the European doom scene and rams them headlong into their own symphonic formula, resulting in an album that resembles a whirling maelstrom of sound. Rarely would I ever advise launching yourself headlong into a roaring whirlpool, but in the case of Necronautical, the results would absolutely be worth the trip, because what glorious destruction it would be.

The Endurance At Night was released by Cacophonous Records and is available here (and on iTunes):

11 Responses to “NECRONAUTICAL: “THE ENDURANCE AT NIGHT””