(Andy Synn reviews the first album in 17 years by Norway’s In the Woods….)

Unless you’ve been living under a rock for the last several years you’ll probably have noticed the surprising upswing in the number of legendary Metal bands making an unexpected return to the scene. From At The Gates to Extol, from Carcass to Gorguts, and beyond, there seems to have been a sudden surge in how many of the “big” names (relatively speaking) have decided to mount their long-awaited comeback… often to greater, and much-deserved, commercial and critical acclaim than they originally received the first time around.

With a 17-year gap separating the release of their last full-length (1999’s Strange in Stereo) from their imminent return, In The Woods… don’t quite hold the record for longest time between albums (of their peers mentioned above, that honour goes to At The Gates with their 19-year intermission between Slaughter of the Soul and 2014’s At War With Reality), but I have no hesitation in stating that Pure more than deserves to be mentioned in the same reverent tones reserved for Surgical Steel, Colored Sands, et al. 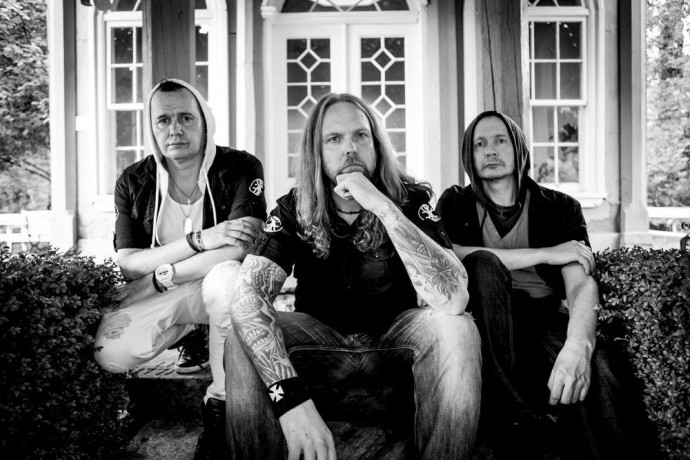 Right from the start there’s a sense of maturity and confidence on display that speaks volumes about the band’s status as an older and wiser entity, and though Pure may be a less overtly “avant-garde” piece of art when compared to its predecessor, it’s still as unique and enigmatic a musical experience as you could wish for.

It’s never boring either, not for a second, and while it may not tip the scales all that much in terms of outright metallic aggression (though the harsh vocals that pop up here and there certainly have their fair share of bite, and many of the riffs have a real weight and heaviness to them), there’s an underlying fire and passion driving each and every track which serves to pack the album to the brim with energy and emotion.

The actual sound of Pure of course is difficult to fully pin-down, though the band tend to describe themselves (not all that helpfully) as “Dark Metal” these days. It’s certainly a dark and doomy affair that’s for sure, laden with passages of earnest introspection and melancholy melodic flair, though to call it simply a Doom album wouldn’t quite capture its true essence. Nor does it betray more than a hint of the band’s more “blackened” past throughout its ten elegantly expressive tracks.

In truth, with its soaring, sombre vocals (James Fogarty’s dramatic, commanding delivery is easily one of the finest performances of the year), refined riff-work, and poignant portrayal of sublime, sombre melody, Pure feels most closely rooted in classic Metal and proto-metallic Prog – though it also never feels retro or old-fashioned.

It’s simply too energetic, too electric… too passionately creative and forward-thinking… to ever be considered a mere throwback.

You’ll note that I’ve said nothing so far about any of the album’s ten tracks specifically, and that’s been a conscious choice. There’s simply so much good material spread across the length and breadth of Pure – with nary a wasted moment to be found – that it would be extremely tempting to just deliver a fawning track-by-track breakdown in place of an actual review/commentary on the album as a single whole.

Similarly it feels wrong to just single out one or two (or five or six) tracks for specific praise when they’re all just so good in their own right. There’s no front-loading or back-ending here. Every single one of these numbers is as vital and evocative as the next.

I’m going to stop now, as it’s really becoming a struggle not to start heaping specific praise on my own favourite songs (which seem to change with practically every listen), and instead close by urging you to pick this up as soon as it’s released next month, as otherwise you risk missing out on one of the most compelling, captivating, and truly complete musical masterpieces of the year.

Outstanding stuff, in every sense of the word.

Pure will be released by Debemur Morti Productions on September 16. It’s available for pre-order on CD (here), special-edition CD (here), or vinyl (here). A digital edition is available on Bandcamp:

Check out two advance tracks below.