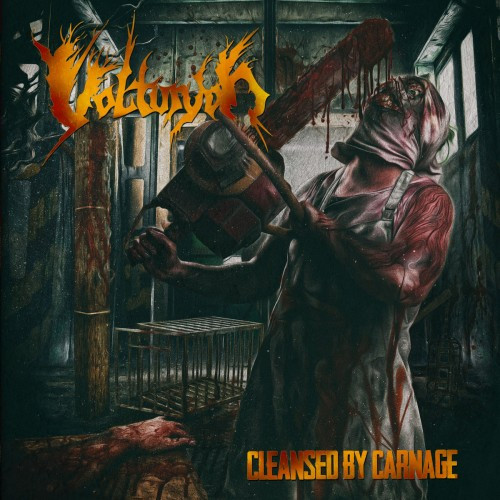 Sweden’s Volturyon are a band for whom I’ve been waving the banner pretty frequently — most of that faith inspired by the EP they put out in 2014 entitled Human Demolition. It’s one that I bring up often because I feel like it flew under the radar of a lot of metal listeners; to me that seems insane, because I am hardly ever on the cutting edge of anything, and if I have something that I feel flew under the radar — something that seems to consistently surprise listeners every time I show it to them — then something isn’t right, and I need to do more to shout it from the mountaintops.

Human Demolition was a concise EP, with four songs and an intro, and three of those songs were blisteringly quick death metal grinders, with one sort of mid-tempo chuggathon to break up the pacing a tiny bit. “Concrete Devotion” is a constant highlight for me. That’s why I was pretty much locked in from the start with the group’s upcoming early-September release, Cleansed By Carnage. 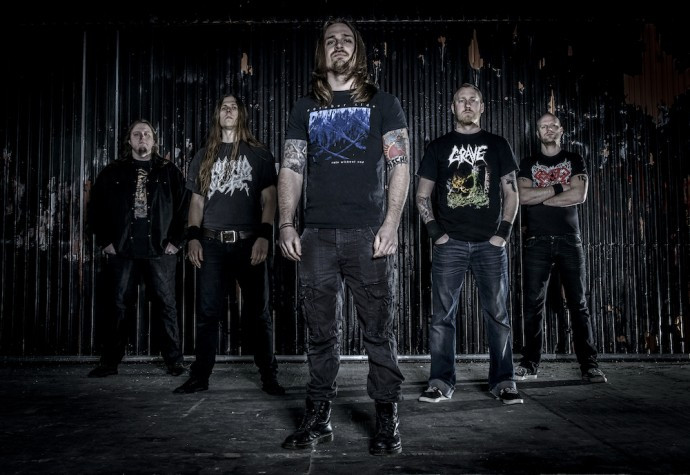 Part of my interest was due to the usual curiosities: Could the band expand upon what they promised with the EP or would they opt for a different direction? The other part was a hope that this disc would be insanely good, just so I could keep pounding the Volturyon drum even harder, spreading the word about a band people should be checking out if they enjoy the death metal genre.

After multiple listens I can confirm at least one thing, and you’re likely going to get sick of seeing it pop up, but I may have to keep hitting that drum throughout the rest of 2016 because Cleansed By Carnage has assauged any fears I might’ve had.

A brief introduction to Volturyon might be in order anyway, for people who might have missed the train the first couple of passes around. Volturyon have two full-lengths and an EP to their name so far. That they are a death metal band from Sweden should alone conjure up a pretty good idea of what they are about, though Volturyon are a little bit more modernized example of a Swedish death metal band.

They have a preference for the speed-and-groove style as opposed to the slower brand of death metal that’s proud to throw itself around in the grime and muck. They’ve got a pretty solid lineup as well, including Oskar Pålsson; who joined in 2014 and had previously handled bass for Coldworker among other groups in which he remains active; drummer Christian Netzell, whom some of you may remember from his time behind the kit for In Mourning or Vholdghast; and ubiquitous vocalist Alexander Högbom, who is now on his fourth release this year after appearances on the Necrosavant, Centinex, and October Tide albums. The band’s two guitarists are Johan Gustafsson and Andreas Olander, who have been the main foundation of the band since 2007 when they took their current name.

You might’ve noticed that I listed the rhythm section first, and for good reason, because although the band have that trademark Swedish buzzsaw guitar tone and riff-machine aspect down pat, Volturyon have proven to be a fairly percussive death metal group. Often it feels like Christian deciding when to lay into the next blast run determines where the song goes next. Lyrically, Volturyon are traditionally as gore-soaked and monster-movie as they come: Hence, the benign chainsaw wielding gentleman making up the artwork for Cleansed By Carnage.

Cleansed By Carnage clocks in at a pretty solid ten tracks: nine originals, no intro (bonus points!), and one cover song — “Pleasure Of Molestation” by Hypocrisy, taken from their 1993 Osculum Obscenum and featuring guest vocals by Magnus Broberg — aka Emperor Magus Caligula during his lengthy Dark Funeral tenure, who performed on that very Hypocrisy disc. In fact, it’s a pretty good choice for Volturyon to break out a Hypocrisy cover because if you listen to a lot of both bands you find that there’s quite a bit of Hypocrisy buried in the DNA of Volturyon before Hypocrisy really went for the loud and epic brand that it came to represent around the time of The Arrival.

From moment one it becomes clear that Volturyon are going the route of matching up with what they promised on their EP. Once you press play, “Pile Of Human” kicks into high gear immediately, in the same way that “Concrete Devotion” really kicked into gear on Human Demolition once you got past its quick intro. This time, there is no intro, just moment one and the blast-and-growl section decides to wait for no man. “Pile Of Human” is the blueprint song for much of Cleansed By Carnage, so you’ll have an idea whether or not Volturyon’s brand of speedier death metal works for you.

Case in point: Both lead-off singles “Fungus Coat” and “Hinterkaifeck” — which lyrically go from monster movie to crazed murderer within two songs — draw from the same well. “Hinterkaifeck” has more of that tradtional chainsaw grind within it, whereas “Fungus Coat” is bleedingly precise in just how high-speed it gets. Most of Cleansed By Carnage has Christian just happily blasting away, and since the guy proves over and over that he can keep a fast tempo, Volturyon demonstrate time and time again that they’re happy to take advantage of that.

The two slower, groove-heavy songs are “To Starve You” and “The Perfidious Idol” — though both really kick into higher gears about halfway through. “Perfidious Idol” doesn’t wait nearly as long, but it rotates between the two hefty parts that make up the song on a pretty frequent basis. “To Starve You” is a more traditional groove-and-death track, perfectly happy to sound like a warehouse of expired metal. The bridge of that song is where it gets faster, otherwise it’s your more prototypical percussive hammer of a song, as the guitars trawl from part to part, uniting around a simple “To Starve! To Starve You!” chorus. “Perfidious Idol” has a solid solo over an apocalyptic death metal section in its back half, in case the bullet storm you’re weathering throughout the song feels too calm for you.

“Cocoon”, which is a faster track for most of its run-time, also has a criminally infectious groove section in between the relentless blast and vocal game of horse that plays for the majority of that track.

A fun situation that doesn’t pop up too much in reviews: I think the best song on Cleansed By Carnage may be the last track before the group’s cover song. “The Capital Of Perverse Punishment” is a rhythmic hellstorm of a song that is part fraternal twin of “Pile Of Human” and part natural evolution of the songs on Human Demolition. It has pretty much all of Volturyon in tandem doing a surgical strike of rhythm-heavy guitar groove and utter drum destruction — the pattern making up the “Punishment!” segment of the song that is the chorus is especially fun.

It’s a beefy track too: A solid mid-tempo section makes up the song’s back half and goes for full doom and death in its closer. “Perverse Punishment” is just a wall of booming bass and drums, with a guitar regiment reinforcing its war upon the listener. It, like many of the songs on Cleansed By Carnage, is a hell of a headbanger, but it is the track that feels the most constructed and dynamic, so I have found that it works the best. Aside from its lyrical niceties, the song is the most well-rounded track on Cleansed. Instead of going for the blast-heavy nightmare that some of the songs create, where the listener leaves with whiplash, or the sewage-groove grossness of the more traditional Swede-death, “Perverse Punishment” ties all of those elements into a very nice, hellscape-drawing, song.

Cleansed By Carnage is perfectly positioned to grab quite a few new listeners. It takes an excellent EP and does a damned fine job of expanding that into a full release, really nailing down just how good this collection of musicians is. The production work is solid and low-end-heavy, which comes across gloriously through the ten songs of jackhammer death on the album. That they’ve hinted at already working on new stuff is terrifying, because the salvo on Cleansed By Carnage is enough to send some metalheads to the doctor with sore necks for some time.

Volturyon certainly don’t break down walls by adhering to certain tropes, but the group do a damned good job of working within some admittedly wide boundaries. Volturyon’s taste for going fast automatically ratchets them up in listening favor for me, and Cleansed By Carnage is a huge, mostly well-rounded, brick of that with a pretty lean listening requirement. They’ve jumped past solid genre-faire for sure this time around, instead dishing out a delicious block of death metal that you should do your best to avoid passing on.

Cleansed By Carnage will be released by ViciSolum Records on September 2 and can be pre-ordered at these locations:

2 Responses to “VOLTURYON: “CLEANSED BY CARNAGE””