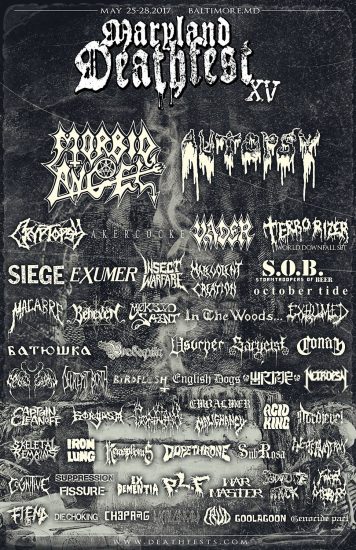 About an hour ago the organizers of Maryland Deathfest announced another round of bands confirmed to appear at the 2017 edition of the event. Here they are:

Speaking for myself, I’m most excited about the news that Batushka will be appearing next year. Also cool to see the appearance of Cognitive on this list (who recently signed to the Unique Leader label) as well as Gorgasm, and that Stormtroopers of Beer cover band should be fun, too. I wrote about Genocide Pact’s 2013 demo here, and that’s another band I’m very interested to see live.

I’ve heard some very enticing and pretty reliable rumors about the two headliners that will be announced in September, and I’m still struggling to keep quiet about it until the official announcement. I’ll just say that they go a long way to making up for the disappointment produced by the abandonment of Edison Lot as a venue next year.

Here’s the full list of bands announced for MDF XV so far: