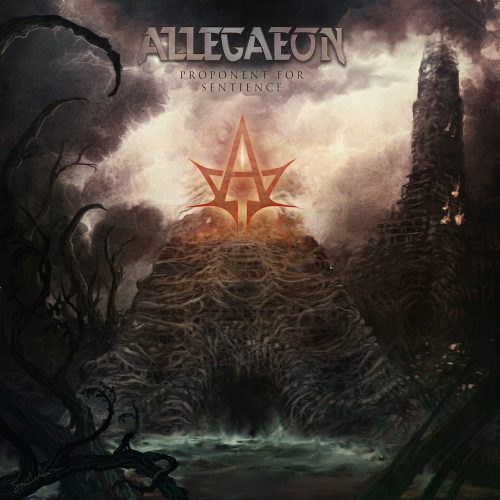 (Here we have Andy Synn’s review of the much-anticipated new album by Colorado’s Allegaeon.)

So I’ve already seen a few reviews for this album eking their way out onto the interweb, several of which have gone down the desperate, obsequious route of “OMG guys! This is the best album ever! It’s perfect! Allegaeon are the future of metal! Please pay attention me!”

And don’t get me wrong, this is definitely a great album, and I’ve been a big fan of the Colorado quintet myself for quite some time now, it’s just that I fail to see the value in such shameless fawning and bootlicking. Do these people really think there’s some sort of value in blowing smoke up a band’s ass like this? When everything is written about IN BLOCK CAPITALS HYPERBOLE!!! and when every album is given a 10/10 rating… what’s the damn point?

Heck, as much as it must be nice to be praised for your work, the majority of the bands I’ve dealt with and spoken to over the years have told me that they’d rather read one well-thought-out review that offered a balance of creative compliments and constructive criticism than ten sprawling screeds written by people who either clearly have their own agenda to promote, or who are simply unable to write something that isn’t just gushingly saccharine and sycophantic.

Anyway, now that I’ve got that little rant out of my system we can get down to the business of reviewing (and praising) Proponent for Sentience, Allegaeon’s fourth full-length album, and their first with new vocalist Riley McShane. 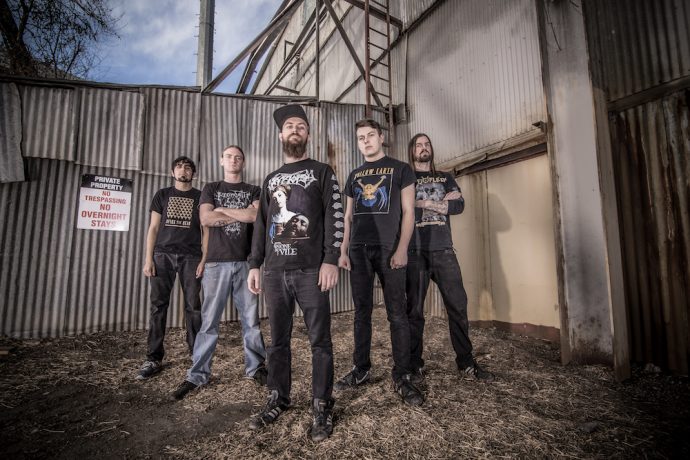 It’s probably worth noting immediately that McShane’s vocals slot in seamlessly with the band’s overall sound (something I’ll admit I was initially slightly concerned about) – just different enough to be distinctive, but similar enough in tone and delivery to his predecessor to help ease the transition.

In fact, his vocals and lyrics on tracks such as “Of Mind and Matrix” and energising opener “Proponent for Sentience I – The Conception” (both fantastic songs, though the Hans Zimmer/Danny Elfman-esque intro of the latter definitely drags on a few too many cycles too long) display much the same blend of confident power and precise clarity as the now-departed Ezra Haynes (though McShane does potentially have an edge in terms of both his upper and lower ranges), meaning that Proponent for Sentience still offers the same careful balance between progressive instrumental intricacy and bold, brutally infectious hooks that has served the band so well for so long.

Indeed, the hooks on Proponent for Sentience are generally bigger and bolder than on Elements of the Infinite (itself a great album, albeit one which I felt occasionally went a little too proggy/noodly for its own good), which to my mind give it a real edge on its predecessor. It’s no less technical or progressively-inclined, of course, but the songs overall are just that little bit catchier and that little bit more refined (and less self-indulgent) than those on the previous album. Though I must admit, Formshifter is still my personal favourite…

As good as this album is, however (and it is!), it isn’t without flaw… the main one (perhaps the only one) being that the sheer length of it, and the sheer amount of material crammed onto the disc, does engender a bit of listener fatigue by around the ¾ mark.

Now I know that some of you will immediately be crafting an angry response about how wrong I am, and how more music is always better (and in reply I’d direct those people here), but the truth is – and your mileage may vary on this – Proponent for Sentience is an album of such high quality overall that a bit of judicious editing/trimming of tracks would only ever serve to improve it, not lessen it. Nothing would be lost, not really, the whole thing would just be that little bit sharper and tighter as a result.

Of course what’s really going to get a few panties in a knot is the following suggestion – this album would be better if it ended with track nine, “Cognitive Computations”.

[pause for general outcry and harrumphing]

Ok, ok, quiet down, quiet down. I realise this would mean cutting “The Arbiters” (which isn’t necessarily a major loss), the band’s delightful cover of Rush’s “Subdivisions” (which, while a great cover, feels a little bit tacked on and out of place right at the end), and the Bjorn Strid/Ben Ellis-featuring “Proponent for Sentience III – The Extermination”… but hear me out.

For one thing you could easily switch out “Demons of an Intricate Design” for “The Extermination” (which is probably a good trade, as the former’s main draw is restricted to some impressively Nevermore-like lead guitar work, while the latter is not only a better overall song but also serves as a vital part of the “Proponent for Sentience” trilogy) and not lose anything in the process.

And, for another, “Cognitive Computations” just feels like a finale. The overall tone and dynamic of the song. The subtle injections of clean vocals in the mid-section. The booming, brooding way it finishes… it’s the perfect point at which to wrap things up and really make a striking concluding statement. Particularly since it’s one of the best songs on the album.

Obviously you’re free to disagree with me but, as I said in the introduction, it’s always felt important to me to offer criticism that’s constructive, and that’s simply what I’m trying to do here.

Still, now that that’s out of the way, we can get back to praising this album for what it does best, which is providing a virtual rollercoaster ride of primal spills and cerebral thrills, all wrapped up in a gleaming package of high-tech, high-fidelity prog-tinged Melodic Death Metal.

From the prism-focussed heaviness of “All Hail Science”, to the sublime intensity and intricacy of the cinematic “Terrathaw and the Quake”, via the Scar Symmetry-esque grooves of “From Nothing” and semi-symphonic stunner “The Algorithm” (not to mention riveting first single “Gray Matter Mechanics”, or the shamelessly epic vibes of the aforementioned “Of Mind and Matrix”), Proponent for Sentience features some of the very best material the Colorado crushers have ever laid down, every track packed with riffs, hooks, and melodies up the proverbial wazoo.

And that’s what I really want you to take away from this review. We can argue, bitch, and disagree about the album’s length and climax all we want (and I’ll be happy to do so in the comments below), but overall Proponent for Sentience is easily the equal of anything Allegaeon have done before, and when it’s firing on all cylinders – as it does for 90% of its run-time – it’s the sound of a band truly operating at the top of their game.

Proponent For Sentience will be released by Metal Blade on September 23. Pre-orders can be placed here:

5 Responses to “ALLEGAEON: “PROPONENT FOR SENTIENCE””