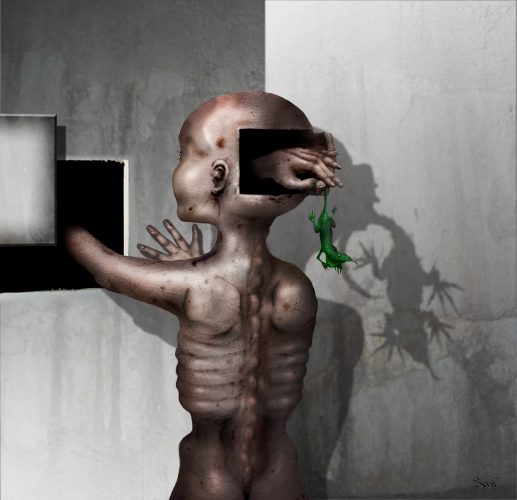 (In this post Austin Weber shares with us a full stream of the new album by Lizard Professor from Fort Worth, Texas, and excerpts from his review.)

In the world of writing about music, sometimes we have to work on a rush, and sometimes unconventional methods of delivering on time are needed. Point in case, our beloved overlord Islander is fleeing town again for reasons unknown. And in order to be able to get this post to him in time to get it ready to be posted before he leaves this Thursday morning, I figured I’d do something different to make it happen.

I say all this because today (this Tuesday, which is now the past!) I spoke with Islander about seeing if I could do a blurb and post at NCS about the Lizard Professor early full album stream I have going up  at my other gig at Metal-Injection. I was asking because Lizard Professor are a fairly unknown quantity, one I felt might benefit from being cross-posted for our audience of fine readers here at NoCleanSinging.

So when I spoke earlier of unconventional methods sometimes being needed in order to achieve a time-rushed aim, what I meant was that I figured the easiest thing I could do to accomplish getting this ready to air in time in a way convenient for Islander was to pull quotes from my Metal-Injection review and analysis of Eccentricity. That way, at least I could give you all a decent amount of information on the album, since I won’t have time to write a separate review for Eccentricity for this post.

So without further ado, here are some quotes from my review to give you a decent snapshot of what the album offers, and what you’re getting into when you hit play below, since we have permission to post the early Lizard Professor – Eccentricity Soundcloud stream and “share” it beyond MI doing the initial hosting of it:

“If there’s only one thing I ask of you dear readers when checking this album out, it’s that Eccentricity is a purposefully strange and infinitely eclectic album. So don’t write it off based on one song or part of a song. This multi-headed hydra of a release cycles through too many different sounds to be judged by a singular song. In it’s totality, Eccentricity covers a diverse sonic range comparable to fellow modern prog weirdos such as Between The Buried And Me, Cyborg Octopus and The Odious. While also drawing strong comparisons (at times) to groove oriented ethereal groups like The Devin Townsend Project, as well as sporting a strong influence and mindset from the off-the-wall multi-genre oddball music of Mr. Bungle.”

“Eccentricity also has a strong penchant for diving into segments and riffs in line with progressive death metal, modern shred heavy melo-death like Conducting From The Grave and Flub, proggy sludge moments, plus some power metal influences in both the guitar-work and vocals at times, and also technical death metal inspired moments as well.”

“At close to an hour and twenty minutes, it’s an album that has a lot to offer, but it never feels like a drag at any point, on any song. It’s album’s like Eccentricity that make me proud as fuck to be able to help share and cover so much of the underground metal scene’s vast talent.”

“From the amazing instrumental performances of each member that deliver the foundation for the music, to the massive range of vocal styles and techniques carefully augmented by playful and well chosen vocal effects, Eccentricity is one of the best prog metal albums I’ve heard in modern times. Possibly ever, and I do stand by that.”

“Really, what I’m trying to say is that this is a prog nerd’s dream, and goddamn is it delicious at each and every twist and endless turn that always come out of nowhere but always somehow fit.”

*Lizard Professor – Eccentricity officially comes out this Friday, September 9th. It can be digitally ordered through their Bandcamp page listed below. Physical CD versions will hopefully come out in the future but are not available right now at the least.