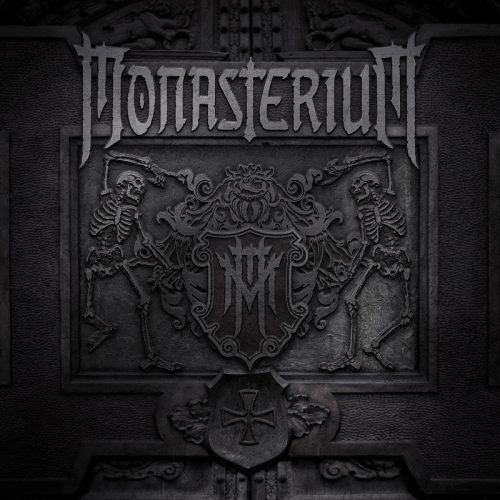 (Our friend Grant Skelton prepared this review of the self-titled debut album by Poland’s Monasterium.)

I have yet to reach satiety when it comes to doom metal. Each new release I come across only seems to whet my appetite rather than quench it. Perhaps a hearty diet of doom simply begets a desire for even more doom. And since I dine daily on doom, I discovered a gem of an album from Poland’s Monasterium. Their self-titled album is currently available from Greek label No Remorse Records.

The stoneclad cover art by Michal “Xaay” Loranc depicts a skeletal coat-of-arms. This banner seems to mark a threshold that, once crossed, will entreat the listener on a journey throughout various mythologies of history. Lyrically, the songs featured on this debut deal with subjects such as martyrdom (“Christening In Blood”), persecution (“A Hundredfold Cursed”), and human sacrifice (“In The Shrine Of The Jackal God”). The liner notes also feature seven unique drawings to accompany each of the seven tracks. Loranc’s artwork adds a deeper dimension to each of the tracks, allowing the listener a visual narrative into the lyrical descriptions. 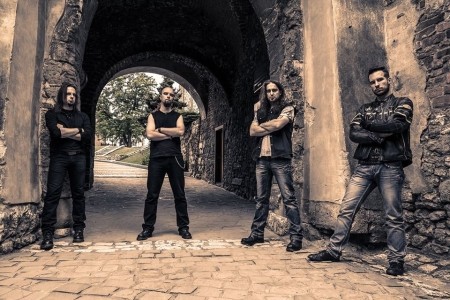 So what do you get from the music? I could certainly label it “epic doom metal”, and that might suffice for some readers. But in my view that label would not do justice to the band. Michal Strzelecki’s vocals wouldn’t be at all out of place in an ancient, decrepit cathedral. His voice has enough power to make him a one-man choir. Tomasz Gurgul is a hooded executioner, his axe slashing out riffs perfect for a predawn march to the gallows. His solos are especially of note, each one meticulous and wholly distinct from the last. In particular, check out the solo at approximately 2:15 of the fifth track “In Hoc Signo Vinces.”

For the historically curious, “in hoc signo vinces” is Latin for “in this sign you will conquer.” The phrase originates in the history of Emperor Constantine I, who Christianized the Roman Empire during his reign. Constantine purportedly had a vision of the sun in which the phrase appeared, followed by a dream in which Jesus Christ explained to him its significance. I am no historian, but those interested in this topic should consider James Carroll’s book Constantine’s Sword. Monasterium definitely includes history in much of their lyrical content, and this kind of information provides context for their music. The track boasts an anthemic chorus that is certain to have fans ravenous for blood during live performances.

Two other tracks of note are “The Pharisee’s Tongue” and “Moloch’s Uprising.” Both are laden with crunchy, hammering riffs and hooky choruses. What makes these songs really sink into the veins is that they are just damn good songs. Too many doom bands of late are so busy trying to reinvent guitar tones from bygone ages that they create songs which are trite, bland, and ultimately soulless. But Monasterium do more with these 7 songs than most modern doom bands can accomplish across multiple albums.

After repeated listens, I am confident that Monasterium’s self-titled album is an absolute marvel with the capability to reach beyond fans of doom metal.