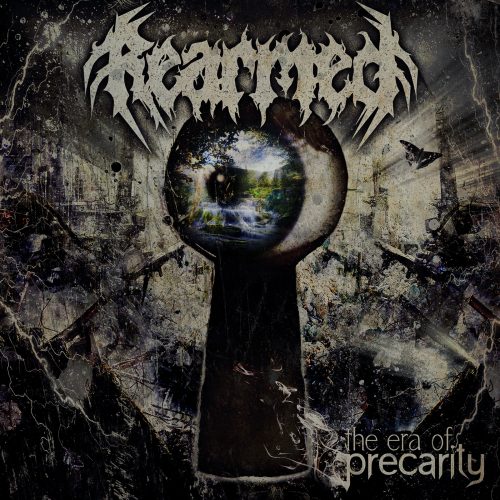 Now more than a decade into their career, the band Re-Armed from Kerava, Finland, are on the verge of releasing their third album, The Era of Precarity. A concept work that imagines a world in which the worst elements and tendencies in modern society become ascendent, the album will be released on September 30 via Finland’s Saarni Records. Today we give you the chance to hear all of it.

You may think you’ve been launched into space, with glowing nebulas to light your way, as you listen to the album’s opening track, but the second one quickly yanks you back to earth and sends you rocketing forward with a blaze of flame trailing behind. And from there, it’s a jolting rush of thrashing death metal that keeps the adrenaline levels in the red zone… but there are also gliding chorus melodies capable of keeping your head immersed in visions far overhead as the wind tears at your face. 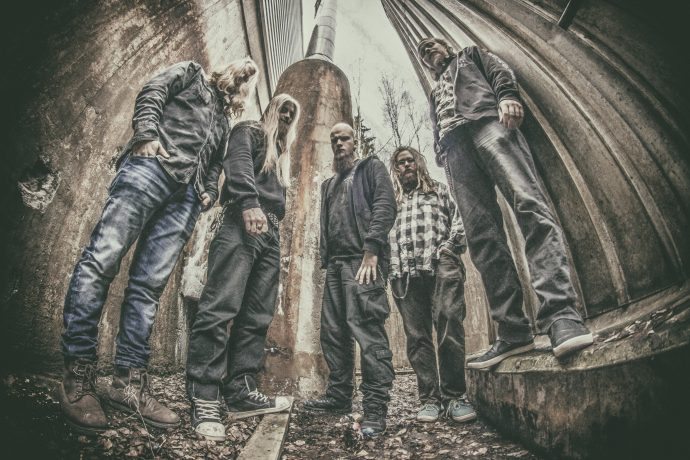 In other words, the album is not just a high-octane thrill ride of death/thrash — though it’s certainly that. On one end of the scale, the band sharpen the edge of their blades with truly savage, acid-laced vocals and veer from heart-pumping gallops into frenzies of ferocity with blackened riffs and punishing drum fusillades. On the other end, they inject the music with swirling, sweeping, and even ethereal melodies that capture different moods from song to song. And there’s some banjo picking in here, too, as well as entrancing acoustic guitar work.

But make no mistake, this album is first and foremost a high-octane road machine, with grooves that hammer like high-speed pistons and the kind of superheated, highly addictive riffs that will whip your head around like a ball-bearing in a centrifuge. Even when Re-Arm ease back a bit on the throttle, the adrenaline keeps flowing.

In short, this is a hell of an ass-kicking good time straight through from start to finish, with enough twists and turns along the way to keep you on your toes.

To return to the concept of the album, the band have explained as follows:

“The Era of Precarity is fully conceptual album where each track dives into a dystopian-world that you would never want to live in. The album reflects decadent elements of our society and challenges the listener to think what kind of world we want to live in now and in the future. All the major conflicts of the 21st century are still solved with warfare, and the interesting question is: ‘Do we really want to leave this perishing world as a legacy to our descendants?’ Therefore the message is current and very serious. While you’re listening to the record we recommend you to leave larping clothes, drinking horns and mythological characters into the depths of your imagination. The world is here and right now.”

Re-Armed have also pledged to donate 50 cents from the sale of every copy to the Karma Ry organization, which supports elder people and young adults in the band’s hometown area with their activities to prevent disenfranchisement.

For more info about this new full-length and to pre-order it, visit these locations:

One Response to “AN NCS ALBUM PREMIERE: RE-ARMED — “THE ERA OF PRECARITY””