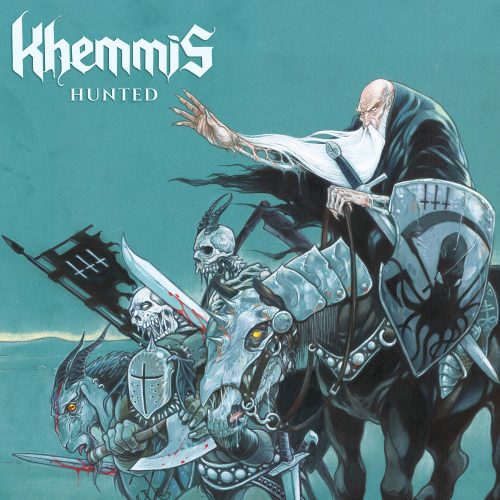 The rise of Denver’s Khemmis into the upper echelons of doom has been nothing short of meteoric, thanks in large part to the enormous appeal of their 2015 debut album Absolution. Since that album’s release, Khemmis have confronted what always comes with stellar debuts — the pressures and perils of high expectations by fans for a follow-on album. In two short weeks, that testing time will arrive as 20 Buck Spin releases the second Khemmis album, Hunted. By one measure, Hunted has already met and exceeded expectations — Sam Turner has again created one hell of a metal album cover, with the Khemmis wizard on an armored steed, flanked by death dealers you wouldn’t want to meet in a dark alley. As it turns out, the music meets and exceeds expectations, too.

In 2015 we had the pleasure of premiering a song from Absolution, along with one of the most interesting and entertaining band interviews we’ve ever published. We now count ourselves lucky that we also get to bring you the premiere of a song from Hunted in advance of its October 21 release. Its name is “Beyond the Door“. 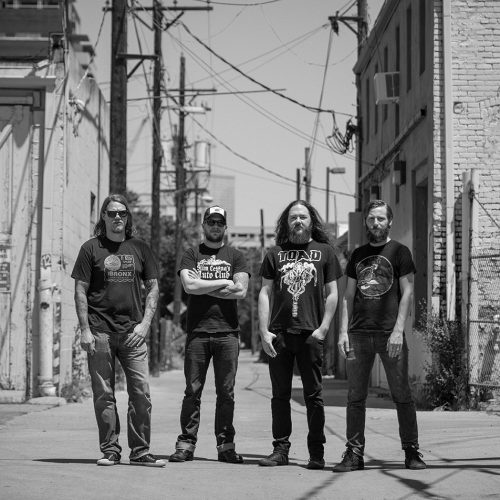 The song captures many of the qualities that have already sent Khemmis‘ career rocketing into the stratosphere. On the one hand, it’s heavy enough to crack concrete. It begins slowly, laced with a mournful yet immediately captivating guitar melody, and Phil Pendergast’s strong clear voice (which is yet another vital element of the band’s appeal) soon rises into prominence — and then Khemmis really start to rock, and that’s when things get really heavy. It’s like suddenly finding yourself in the path of a titanic bulldozer.

But in addition to the massive riffs, the skull-splintering impact of the rhythm section, and Pendergast’s striking voice, “Beyond the Door” also provides a showcase for another quality that explains Khemmis’ rise: The song is loaded with scintillating guitar melodies. The second half of the track includes a glorious dual-guitar jam followed by a fiery solo that pierces, squalls, soars, and dives like some aural manifestation of the Khemmis wizard’s spellcasting. The song packs a hell of a finish, too, slowing and turning once again into a bruising crusher, this time accented by nasty snarls and growls and some narcotic guitar work.

In a nutshell, this is a wonderful song — and there are four others waiting for you on Hunted.

As was true of Absolution, Hunted was recorded at Flatline Audio with Dave Otero (Cobalt, Nightbringer, Cephalic Carnage). The album will be released by 20 Buck Spin on October 21. Pre-order bundles are available HERE and you can pre-order the digital version of the album HERE.

You can check out the track list below, and in addition to “Beyond the Door” we’re also including streams of two previously released tracks, “Candlelight” and “Three Gates”. Enjoy….

4 Responses to “AN NCS PREMIERE: KHEMMIS — “BEYOND THE DOOR””