(In this new edition of KevinP’s short interview series, he talks with guitarist Theo Lyratzakis of the Greek band Hail Spirit Noir, whose new album Mayhem In Blue will be released by Dark Essence Records on October 28.)

K:   I think it’s pretty safe to say that most people are gonna view this album as easily the best of your career. As much as I loved both prior releases, compared to this new one, dare I say they sound “half-baked”, almost “disjointed”.

T:  Ha!  Well, that’s always good to hear!  Thank you kindly.  Knowing you are a fan, it means a lot.  We obviously wanted Mayhem In Blue to be our best album to date.  It’s the difficult third album and a lot of work has been put into it.  Not that either Pneuma or Oi Magoi disappointed us in any way but this is where we are now.  And we need to express ourselves as keenly and accurately as possible.  So you know, thanks.

K:  I even think Mayhem in Blue is your most accessible album.  Yeah, I know that sounds like a bad thing, but maybe (or at least partially) it’s because we are 3 albums in and this oddball hybrid you created no longer feels foreign.  It’s by no means typical or something that every Tom, Dick & Harry will enjoy, but it does feel a bit more approachable for newbies, while still being kvlt.  LOL

T:  I don’t think we ever fit the kvlt crowd or any crowd for that matter.  I mean there never was an intention that we need to be liked by a particular group of people. We just set out to do our thing with Pneuma. In fact, we thought everyone would hate it.  And some do.  Others hate Oi Magoi.

Accessible? Maybe as you said it’s a bit more focused, so the songwriting shines through a bit more.  But accessible is not a bad thing.  It’s not as if accessible means sell-out.  We play within a niche of niche genre. We are obviously in it for the big pay off.  LOL

As for our hybrid, you can only have the element of surprise once.  Otherwise, it turns into a gimmick.  But as all three records have proven, we are far from one-trick ponies.  It’s always going to be alien to newcomers and that’s a good thing, we take them by surprise.  As for the future, we can always record a shit album and surprise the hell out of everyone.

K:   Has anything changed about the way you approach the songwriting? Anything you look back on and are surprised about?

T:  The whole process was more or less the same but we devoted a bit more time to guitar effects and incorporating weirder sounds.  What did make a difference though, and actually surprised us, is how our surroundings crept into the music.  We do not live in a vacuum, so this time (I think what I remember) once it was done, was that there was a constant bittersweetness to all the songs.  Kinda like how we deal with the current state in… well, everywhere.

Well, for the most part things happened as usual.  Haris, our main composer, prepared really detailed demos that he gave us.  Then Demian and I started working on riffs and melodies, and particularly Demian did an insane job utilizing and incorporating a million crazy sounds on the album through his pedal board (which now resembles a Lego City overview).

We really have to thank Dimitris Douvras at Lunatech Sounds because this time he really went above and beyond with the amount of layers we gave him, and his mix was phenomenal.  That made Alan Douches’ mastering job easier and he absolutely delilvered.  He is the one different ingredient this time. His work with Motörhead and Chelsea Wolfe was really impressive and we knew we wanted a fresh perspective. 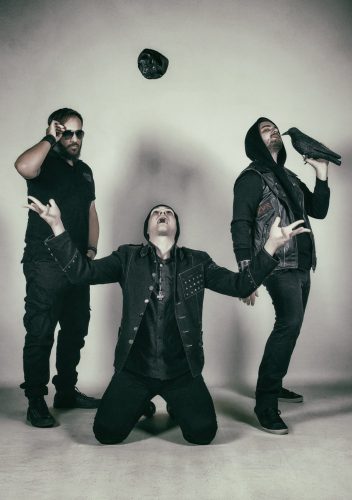 K:  So when we last spoke in March 2014 you were working on getting a few more members and a concept for some live gigs.  Did that ever materialize?

T:  Oh yes, it finally did. About bloody time as well!

You won’t believe some of the offers we had to turn down just because we did not have a live line-up together. It was absurd and it was driving us nuts.  So when we were done with the recordings, and since one of the reasons we signed with Dark Essence was to move things forward, we had a long 10-minute talk and then started making phone calls.

It’s a cliche, but you really can’t do much unless you put yourself in the live setting.  So once we were certain these particular individuals were on board, we started rehearsing and at long last, this October, the 28th & 29th, we’ll have our first-ever shows supporting Virus in Athens and Thessaloniki.

The guys are Sakis Bandis on keyboards, an insanely talented player who used to be in one of Greece’s prominent prog bands in the nineties, Foivos on drums, also a member of Agnes Vein, and Cons Marg a singer of Until Rain and Dystynation (plus he was part of Lucassen’s The Human Equation Live Project).  Plus, that relegates me to just guitar, as I have no chance in hell of doing both.

K:  Offers you turned down:  We talking main stage at Wacken, or Nicko’s Gyro Stand on the corner of 5th Ave?

T:  Busking in Covent Garden. Sadly, no merch stall was allowed.  But seriously, we are talking gigs in Greece that an up-and-coming band such as ourselves need, if only to get exposure to a wider audience.  For our stature at the time, they were equally important as any Wacken slot.

Mayhem In Blue was mixed by Dimitris Douvras (Rotting Christ) and mastered by Alan Douches(Chelsea Wolfe, Motörhead). The album art was created by Olia Pishchanska. It will be released by Dark Essence Records on October 28. The track list is below, followed by a stream of “I Mean You Harm” from the new album. To pre-order the album, go HERE.

5 Responses to “GET TO THE POINT: HAIL SPIRIT NOIR (THEO LYRATZAKIS)”