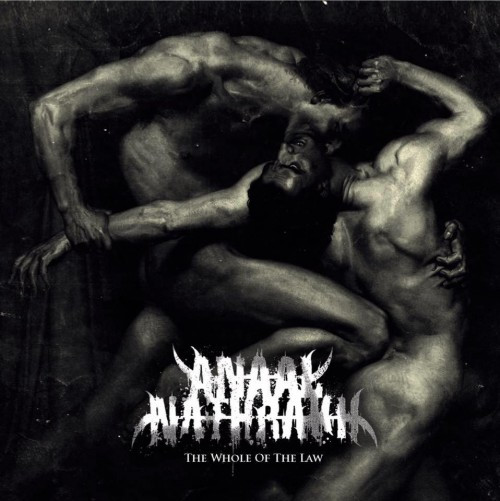 (DGR reviews the new album by the UK’s Anaal Nathrakh, which will be released by Metal Blade on October 28.)

Few bands out there these days have weaponized music like Anaal Nathrakh has. The long-running project now has an immense collection of albums in its discography — all of which are some combination of abrasive noise, destructive instrumentation, and annihilation on the lyrical front.

Anaal Nathrakh are a band whose very formation is based around the idea of being as noisy as possible. If heavy metal is to be treated as a form of catharsis, then the aims of Nathrakh are to be the ultimate form of that in rage. For all of this talk of destruction, however, there are the occasional signs of where this anger comes from (considering this is a band that doesn’t provide lyrics to its albums and even then could probably save ink doing so since half of its vocal lines seem to lack consonants), which has been largely driven by a disgust with humanity and where the species is headed. 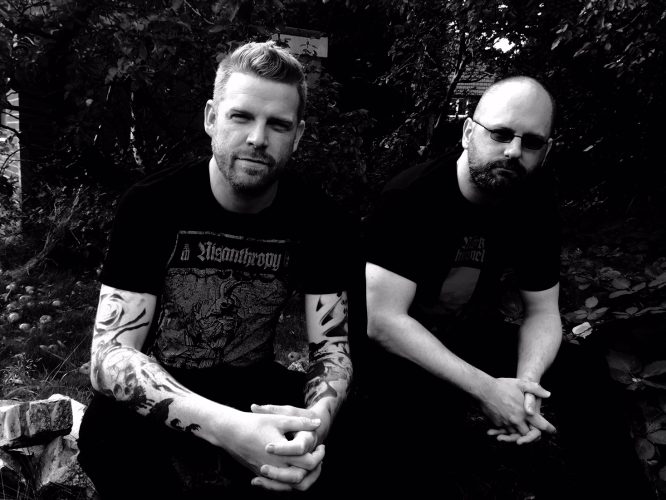 Beneath the immense wall of sound and fury, though, is a highly intelligent being lashing out at the world. Having cited numerous poets — “Hell Is Empty, And The Devils Are Here” being from Shakespeare’s The Tempest, and “The Blood-Dimmed Tide” drawn from the poem “The Second Coming” by W.B Yeats (itself probably the provider for a gigantic amout of inspiraiton in metal), as the most obvious ones — naming albums in Latin, with the pairing of Vanitas and Desideratum, as well as Domine Non Es Dignus and its multitude of citings.

Desisderatum’s title song, for instance, contains a sample from An Inspector Calls that distorts and ensures that you only discern the back half of the sample, which states, “We don’t live alone. We are members of one body. We are responsible for each other. And I tell you that the time will soon come when if men will not learn that lesson, then they will be taught it in fire and blood and anguish”.

The group’s newest album The Whole Of The Law, pulls its title from the law of Thelema, the Aleister Crowley-developed religion that states: “Do what thou wilt shall be the whole of the Law. Love is the law, love under will.” This basically ensures that with this new disc, Anaal Nathrakh remain as heady as ever, and when they get intellectual and have found a theme upon which to center a disc, things tend to get very, very violent.

Despite being a force of nature; over the years Anaal Nathrakh have bred a little bit of a sense of familiarity with their music. You know going in that everything is going to be like standing in a hurricane with the music played at hyperspeed, the lyrics will be nigh-unintelligible for the first few weeks until you wrap your head around what is happening in each inhuman and distorted to-hell-and-back scream, and there are probably going to be a couple of build-ups in the opening of each song that result in a quick start-stop section that counts off the opening — a quick 1-2-3-4, 1-2-3-4 AAAAAAAAAAAAAAAAAAGGGGH style of opening.

However, what makes the band fun is that the Nathrakh crew still find a way to sneak in a couple of surprises, and they’ve definitely done that in The Whole Of The Law.

The group’s prior two discs, Vanitas and Desideratum, felt like a pairing, two sides of the same coin and while both were chaotic and incredibly angry, they were also very sleek and polished. Desideratum especially is filled with massive chugging guitar riffs and electronics that make the whole experience very clean. It actually resulted in Desideratum coming off as the band’s most “approachable” disc and it is one of my personal favorites; it hits quick and surgically and it became a go-to album and has held that spot since 2014.

The Whole Of The Law is different from both of those, though it retains its older siblings’ love of using electronics and samples to inflict pain upon the listener.

I would never be one to suggest that anyone listen to the audio of a train crash, but that is probably the best way I can describe The Whole Of The Law, as it feels like two trains colliding into each other- – one of which is named Passion and the second In The Constellation Of The Black Widow. 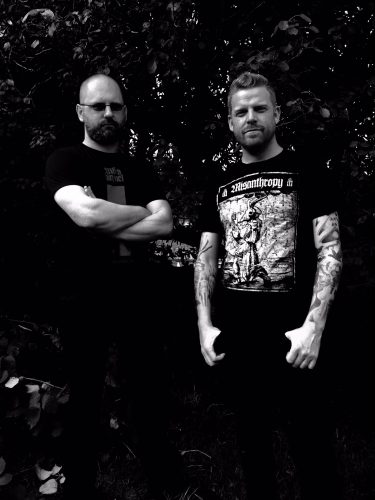 The Whole Of The Law — as evidenced by its two opening tracks, “The Nameless Dread” and “Depravity Favors The Bold” — is a much noisier album than its siblings, bringing to mind the sort of wall-of-sound nightmare that was present on Passion, as well as the inferno-like anger that powers Black Widow. It’s as if much of The Whole Of The Law was written relatively straightforwardly, and then afterwards had every knob and feasible tool with which to alter it messed with, just enough to crank everything into unpleasant territory.

“Hold Your Children Close And Pray For Oblivion” seems built around the idea of trying to destroy its listener through repeated use of a pounding bass sample during its main verses, before spilling into one of the many power-choruses sprinkled throughout The Whole Of The Law. “Hold Your Children Close” has a lot of fun with the idea of being a twisted take on an operatic song; it sounds like multiple genre machines locked in a battle to the death during the three and a half minutes that it spends with you.

Fans of the aforementioned Anaal Nathrakh patented power-chorus, though, will find that a multitude of songs on The Whole Of The Law don’t really have any, instead existing strictly as fury-and-fire from moment one. There’s still a multitude of surprises in their place, but The Whole Of The Law is a much more raw album than before, and it comes through in the amount of screaming and anger in this one.

Two-parter “We Will Fucking Kill You”, despite its on-the-nose title, is actually one of those surprises, containing a handful of moments that actually see Nathrakh stumbling into In Flames lead-guitar territory (especially in its back third for a moment or two), and the funneir part is, Nathrakh do a better job at it during “We Will Fucking Kill You” than In Flames have been doing with their last few releases (upcoming album Battles, notwithstanding, haven’t heard it yet).

But when you hit the second part of the the pairing of songs, “…So We Can Die Happy”, that’ss when the fun begins. “So We Can Die Happy” is a delightfully twisted delivery of the Anaal Nathrakh formula; no clean singing, entirely screamed, delivered at hyperspeed with a demented guitar solo, and a hammering midsection. The whole song is built around a start-stop section to each verse and is easily one of the best songs on The Whole Of The Law. When the band decide to close the song with a sample of children singing “Wheels On The Bus” that slowly falls apart, that is when that song really cements itself as one of the best. It really wraps that fireball up into a nice, neat little package.

“And You Will Beg For Our Secrets” follows a similar path, albeit one that actually has some throat-singing in its delivery, which proves to be interesting because it just barely rises above the war-machine that is the band at that point. The first time it really becomes noticeable is when the group dead-stops everything for a brief moment of silence, which, as Nathrakh are wont to do, is quickly destroyed by a combo of gigantic high scream and blast beat. It has to be one Nathrakh’s constant go-to’s, and yet it is still hard not to want to plant your fist through a wall whenever it happens.

There are two tracks, though, that could have fit in with previous releases, so fans of albums like Vanitas and Desideratum especially will find a lot to love in “In Flagrante Delicto” and “Extravaganza”. “In Flagrante Delicto” is a little bit more of a standard Nathrakh tune, built around a massive chorus and a lot of fun with samples and huge blast sections leading into those aforementioned sung-chorus segments. The electronic bits in the opening, which come after some stuttering guitar work, are a lot of fun and help a ton when the actual song spills over as a whole.

“Extravaganza” is a little bit more of a twisted-track, including some ultra-high and distorted-to-annihilation clean-sung bits that come out of nowhere in that song. It’s kind of a circus act as written by Anaal Nathrakh and put into song form. “Extravaganza” is a spectacle built around a massive guitar chug that powers the whole song. It is one of the few “grooving” tracks as a whole, placed into an album that bounces between different forms of madness for its runtime. “Extravaganza” basically stomps around the idea of being a song with about as much subtlety and grace as Godzilla learning ballet. By the time “Extravaganza” wraps up, it is likely a city has been flattened somewhere.

The Whole Of The Law is delivered at a hysterical pace, as frenetic as Anaal Nathrakh have ever gotten. It is an album that is powered by a gigantic inferno of sound and it quickly bowls over anything that gets in its way. It sounds like a full stand-alone album and is one of few amongst the Nathrakh discography where you can’t quite tell where each song is going to go next. There’s a multitude of twisted paths and interconnections for each song to take, and sometimes The Whole Of The Law feels like an album that doesn’t want to decide where to go next, as the songs attempt to take every path possible all at once, and the resultant chaos is what the listener has to discern.

The immense swath of sound packed into The Whole Of The Law makes the experience one that is worth taking, as it is one of the few albums that seems capable of sanding the listener down to a small nub by the time it is done. There’s so much music packed into each song and, as is the Nathrakh way, all of it is attempting to break the laws of physics by going faster than light.

There’s multiple walls of screams twisted into inhuman form, and ones that are actually somewhat understandable. There’s a giant pulsating rhythm section with its usual fare of blasting drums and roaring electronics, including many samples that weave throughout the songs; the one time a song stops to make it clear that there is spoken word being used during it is when all the music stops and you hear the word “agony” stated — even though there is a whole speech that has been happening before it.

Anaal Nathrakh continue to be the experts at appealing to a very violent and very angry niche of music and are one of the few bands capable of melding a million genres into one song and having it work. The Whole Of The Law is just the latest packed-to-the-gills example of that, an explosive release that needs to be unleashed upon people.

To order the album:
http://www.metalblade.com/anaalnathrakh/

3 Responses to “ANAAL NATHRAKH: “THE WHOLE OF THE LAW””