A few days ago the mighty Swiss juggernaut Bölzer released another song from their new album Hero, which will be released on November 25 through Iron Bonehead Productions. The first song that appeared, “I Am III”, was more than 10 minutes long — a dramatic, majestic, dark, brooding, esoteric, and triumphant piece in which the band moved in some dynamic new directions. The latest track, “Spiritual Athleticism“, is a more compact affair and perhaps more in line with what we were expecting based on Bölzer‘s previous releases.

Consistent with the song’s title, it’s a muscular, brawling piece of music driven by Bölzer‘s sinuous, mind-warping riffs and a spine-rupturing drum performance. Laced with guitar chords that sound like spectral chimes and with vocals that are mainly harsh and savage, “Spiritual Athleticism” is explosive and gripping. 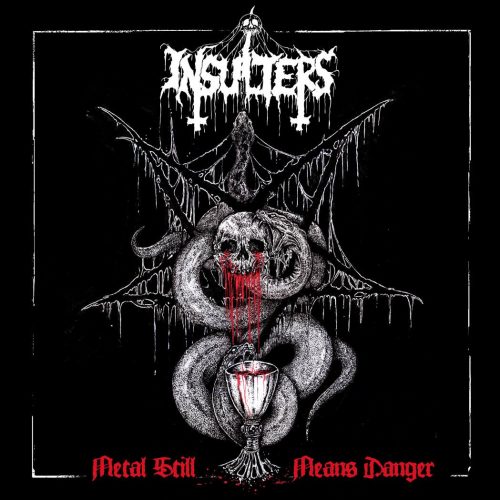 When I got a press release about the new album by the Spanish band Insulters, I happened to have the time to jump immediately to a sample song, and got hooked on it immediately. Unholy Prophecies and Equinox Discos released their debut album We Are the Plague in 2013, and the same labels have now set January 1, 2017, as the release date for a second full-length, Metal Still Means Danger. The album was mixed and mastered by Javi Felez (of the mighty Graveyard) at his Moontower Studios.

The song below is the new album’s title track. It’s been up on YouTube since the early summer, though of course I just discovered it. Perhaps you are skeptical of a band who feel the need to tell you up-front that their music is dangerous, or to remind us that metal in general is supposed to be dangerous music. But I suspect any skepticism you feel will evaporate once you dive into this dynamic song.

The rhythms move from d-beats to gallops to lurches; the riffs slash and seethe and gleefully bound about (and they’re highly infectious); the soloing is hot as an acetylene flame; and the vocals are ferociously ugly and terrifying. And yeah, as much fun as the song is, it does sound dangerous, too. 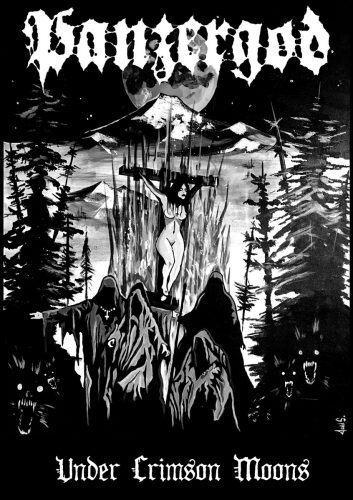 On October 26, Panzergod from Portland, Oregon, released a new EP named Under Crimson Moons. It will get a cassette tape release through Red River Family Records in November. It consists of an introductory Prelude and two full songs, the title track and “Age of Diabolic Supremacy”.

I don’t know if people still use the term “Cascadian Black Metal”. This isn’t that, despite the fact that Panzergod dwell in the dank forested realms of Cascadia.

The Prelude sets the stage with a collection of voices and ominous tones that conjure images of some hellish ritual in which blood is being shed. The title track follows that stage-setter with a sinister, mid-paced, punk-fueled piece of savagery that soon enough explodes in a rush of blasting drums and writhing riffs. There’s a deep, pummeling, bass-heavy undercurrent to the song that complements the thick, catchy riffs and high, incendiary lead guitar derangement. The barbarous vocals put their own bestial stamp on a dynamic song that’s already beastly.

“Age of Diabolic Supremacy” alternately thunders, stomps, and rampages, with the potent rhythm section turning in another galvanizing performance. In the song’s slower passages, the music’s aura is dismal and desolate, and when it’s operating at full-bore, it’s decimating. Like the title track, the song is dynamic and powerful — and the melancholy, vibrating melody that slithers through the music in the final minutes as the drummer blasts with pneumatic precision gets stuck in the head, too.

This is a really excellent small release, and further evidence that Panzergod needs to be on the radar screens of all black metal aficionados.

To get the digital version of Under Crimson Moons, use the Bandcamp link below. And in other Panzergod news, Exile Music(k) will be re-releasing Panzergod’s 2015 full-length, Deathshrouds Bestowed, on CD in early 2017 (the original cassette release has been long out-of-print).