(We present Andy Synn’s review of the new album by Norway’s Khonsu, plus the band’s just-released stream of an album track called “The Observatory”.)

The many-worlds interpretation of quantum mechanics suggests that there is a potentially infinite number of alternative universes in existence, some wildly divergent from our own, some as close to what we know as to be almost indistinguishable from the one we call home.

Listening to The Xun Protectorate is like being given a teasing window into one of these worlds… a world that is both strikingly different, and yet intimately familiar, where the battle for the heart and soul of Black Metal was not dominated by the devil-worshippers and the church-burners, but by the stargazers and the dreamweavers.

In this world the titanic generation ships of the Samael exodus have long since passed beyond the limits of our solar system, carrying with them the cyborg monks of the Brotherhood of Thorns as they seek to interface directly with their god, while, in orbit around the ruins of Old Earth, the neon-spires of Perdition City play host to the Machiavellian machinations of Dødheimsgard Inc. and their gene-engineered clientele.

It’s a world where the nascent Black Metal scene chose entirely to reject the insular, inflexible dogma of those who wanted to limit it, to keep it small and keep it to themselves, and instead embraced an expansive, open-minded approach, looking outward, instead of turning inwards. And only in such a world could an album like The Xun Protectorate have come to fruition…

With their second album Khonsu (now comprised of multi-instrumentalist S. Grønbech and new vocalist T’ol) have built upon the futuristic vision first put forward on Anomalia by expanding the scope of their sound in new and innovative (if potentially divisive) ways.

“The Observatory”, for example, takes the pulsing Nine-Inch Nails-isms of songs like “The Maladie” a step further, seamlessly intertwining and intermingling them with vicious elements of razor-sharp Black Metal and shamelessly extravagant, proggy melody (courtesy of Rune Folgerø of Manes/Atrox fame, who provides his dramatic, expressive clean vocals on several of the album’s most ambitious – and infectious – numbers), with a guitar solo at the end by Arnt “Obsidian C.” Gronbech from Keep of Kalessin.

Similarly, “The Tragedy of the Awakened One” is a masterful blend of multi-layered atmospheric passages and wickedly evocative metallic guitar work a la Arcturus, liberally laced with undercurrents of shimmering electronica and soaring, electric melody lines of a distinctly pink (Floyd) hue, while “A Dream of Earth” sees the band moving into realms closer to Massive Attack than to Mayhem, interweaving its taut, tightly wound riffs and vibrant, throbbing drums with a hypnotic trip-hop pulse and a sense of dreamlike wonderment quite at odds with the traditional, provincial view of what Black Metal should be.

Of course there are two sides to every coin, and for those in search of something more aggressive than ambient, something more antagonistic than atmospheric, tracks like the scorching “A Jhator Ascension” and the ravenous “Visions of Nehaya” should more than satisfy their appetite for destruction. The former marries the nuclear intensity of Keep of Kalessin at their most blistering with the relentless, cyberdyne grooves of Thorns to thrilling effect, while the latter is a no-holds-barred blastastrophe of violent proportions, and both songs serve more than adequately to display the truly murderous potential of Khonsu at their most extreme. 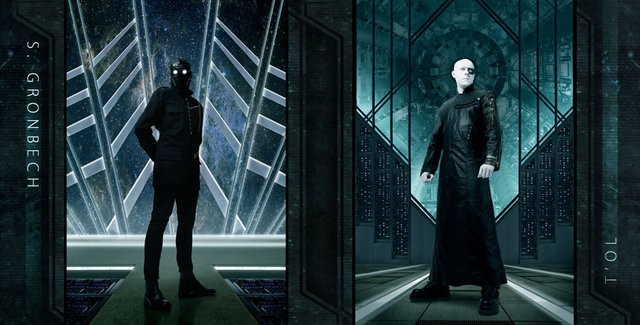 Reminiscent in many ways of classic Emperor (albeit, from a universe where Ihsahn and co. chose to dwell on The Dark Side of The Moon, rather than In The Nightside Eclipse), “Liberator” is also one of the album’s more punishing (though also subtly progressive) numbers, delivering nine minutes of heavy, hook-infused riffage and pounding, kinetic drum work alongside sweeping swathes of shimmering sci-fi electronics and grandiose, cosmic keys, while the more Prometheus-esque “Death of the Timekeeper” seeks to marry Khonsu’s proggy eccentricities with their more metallic proclivities, bridging the gap between the more ambient and more belligerent sides of their nature, even as T’ol and Folgerø trade off harsh and clean vocals in a dynamic display of alpha and omega.

Of course the best is saved for last (or, second to last anyway), with the twelve-minute minute odyssey of “Toward the Devouring Light”, which could perhaps serve as the band’s defining musical statement, fusing the DNA of all their influences – from the blackened to the electronic, the progressive to the industrial – into one titanic expression of Grønbech’s unique and electrifying vision.

So if you’re looking for something that doesn’t play by the usual rules, Black Metal or otherwise, something fearlessly creative and flawlessly focussed, but which never fails to deliver in terms of sheer power and enigmatic energy… The Xun Protectorate is waiting.

The Xun Protectorate will be released on November 18 via Jhator Recordings/PHD. It’s available for pre-order HERE, and on iTunes.

Below we invite you to check out the band’s just-released stream of “The Observatory”, plus a previously released video for the album’s first single, “A Jhator Ascension”.

11 Responses to “KHONSU: “THE XUN PROTECTORATE””