Those of our readers who visit our site every day (i.e., the truly wise among you) will immediately recognize the artwork at the top of this post — because it appeared here only yesterday, when I included a new song by Tumbleweed Dealer in a collection of music that I urged people to hear. And as I promised in that post yesterday, we have yet another song by this very talented band to put before your ears. Its name is “Saloon Fight“, and it comes from Tumbleweed Dealer’s new third album Tokes, Hatred & Caffeine, which will be released on November 21.

For those who didn’t stop by here yesterday and who may be newcomers to this Montréal band, they are a formidable duo consisting of guitarist/bassist Seb Painchaud and drummer Jean-Francois Richard. There are weed references aplenty in everything surrounding the band, from their name to many of their song and album titles, but you need not be a toker or a deeply devoted fan of stoner rock and metal to appreciate Tumbleweed Dealer’s approach to music. They, too, have different interests… including imagining how the Old West might have looked if seen through the prism of a horror movie (and a lot of drugs). 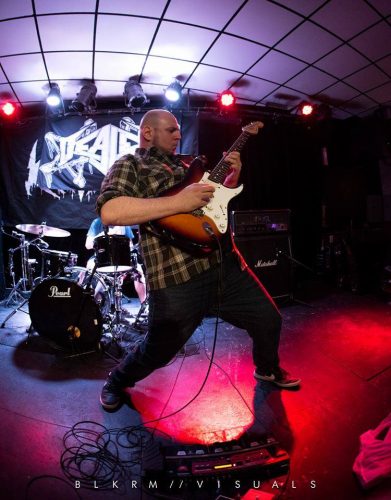 The band’s last album, in fact, was named Western Horror (and you damned well should give it a listen if you haven’t), and the song we’re bringing you today is named “Saloon Fight”. And as you’ll discover when you hear this instrumental piece, Seb Painchaud has a multitude of musical interests that he interweaves into this track, as he does in everything you’ll hear in TD’s discography.

The swirling arpeggio, funky bass line, and pulse-pounding drum rhythm that launch the song get their hooks in mighty fast, and once the hook is set, Tumbleweed Dealer begin spinning off variations on the theme, sending notes spiraling and flickering into the air like sparks, while rumbling your guts with a punchy, sludgy bass rhythm and tumbling drum progressions. And that hook they set at the opening? It never comes loose — it just digs in deeper.

This might not be the kind of saloon fight that knocks your teeth out, but it sure as hell ought to put a wide, woozy smile on your face.

Enjoy “Saloon Fight” below. And by the way, if you missed the song we featured yesterday — “Bongwater Creek” — I’m including a stream of that one right after our launch of this new one. As I wrote yesterday, it’s funky, heavy, bluesy, jazzy, and psychedelic — a head-bobbing, day-brightening swirl of colors, and it tastes much better than bongwater.

Tokes, Hatred & Caffeine can be pre-ordered now via the Bandcamp link below (the price will go up by $1 on the album’s November 21 release date — so don’t delay!).