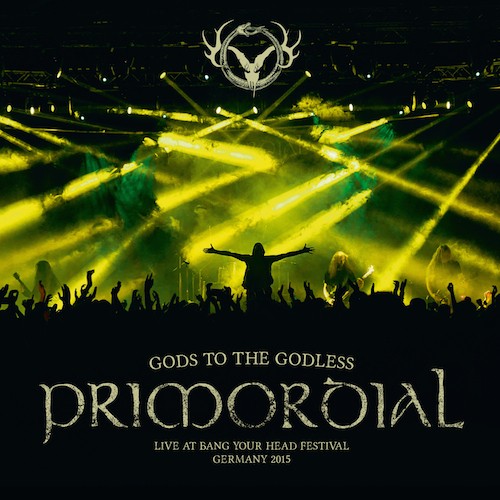 Those who have witnessed the great Irish band Primordial on stage know first-hand the emotional power and immediate intensity of their live performance. For those who haven’t had one of those unforgettable experiences, and for those who have, but wish to re-live them (or at least to come close), Metal Blade Records is releasing a live Primordial double-album on November 25 called Gods to the Godless, which was recorded at the 2015 Bang Your Head Festival in Germany.

Today we’re helping premiere one of the tracks from this live concert recording, and it happens to be one of the strongest single songs that Primordial have created in their illustrious career: “Wield Lightning To Split the Sun“. 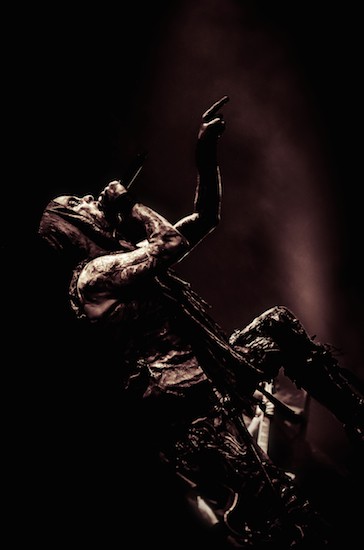 Before we get to the song, here are comments about the album by Primordial‘s A.A. Nemtheanga:

“It might seem like an unusual move, a double live album. Especially within the scene we are from, but the live album was once a staple of most bands’ careers and something we all grew up with in our collection. Pouring over tour dates, gear information and killer live pics. Ok so it’s not Live After Death but you can see the attraction and taste the romance involved, right?

“Fact is though we hadn’t planned it, it was basically a happy coincidence, the good people at Bang Your Head who took such a risk booking us the first time on a more traditional old school rock festival had us back for the fourth time, gave us a proper headlining set length and happened to mention afterwards that they had a mobile recording device rigged up and ready to go. When we listened back to the tapes we found something we could work with and the idea took shape.

“If you love the band, you will know what to expect: blood, guts and passion – and believe us, the double vinyl will look beautiful! If we’ve been in your orbit, but you’ve never trained your sights on us properly, this might be a good place to start as the sound is massive, the old songs have some added muscle and the planets aligned to make Gods to the Godless perhaps a great introduction to the band.

“From our side, it felt like something important to do, like taking advantage of an opportunity to make not only a standalone album in its own right, but also add something rich to the heritage and tapestry of metal that once hinged on the live album. The tradition reaches back into the 70s and 80s and we are proud to have our own small place in that pantheon! And for the record…not one single over-dub. This is truly Live and Dangerous…”

It’s not unusual (or cause for condemnation) for bands to fall into embellishment and exaggeration when making public statements about their new releases. But what Nemtheanga tells us about this new album is the truth — the sound is indeed massive; the performance is indeed fueled by blood, guts, and fiery passion; older songs do strike with added muscle; and Gods To the Godless does make an important addition to the rich heritage of live albums that are part of the tapestry of metal.

It is also true that the album makes for a fine introduction to Primordial for people who may only now be discovering them, because the track list includes many of the band’s best songs from across a wide range of albums. Take a look:

Gods To the Godless is available for pre-order at this location, where you can also hear the live album’s title track:

2 Responses to “AN NCS PREMIERE: PRIMORDIAL — “WIELD LIGHTNING TO SPLIT THE SUN (LIVE)””