(In this month’s edition of THE SYNN REPORT, Andy Synn reviews the discography of Terra Tenebrosa.)

Some bands are easy to categorise. Death Metal. Black Metal. Thrash. You can stick a band in one of these boxes and (generally) have a good impression of the sort of sounds you can expect to hear.

Of course, sometimes the category itself can be a bit nebulous. Metalcore. Nu-Metal. Progressive Metal. These aren’t quite as well-defined, and are frequently used as a catch-all term (often, but not always, with negative connotations) for bands that don’t fit properly in one of the “core” Metal genres (no pun intended).

And then there are bands like Terra Tenebrosa, who seem to willfully defy categorisation altogether.

“Avant-Garde Black Metal” seems to be the closest approximation that most people have settled on for their sound, but even this doesn’t quite capture it. There are elements and undercurrents of everything from gloomy Post-Metal and chaotic Hardcore to pulsing Industrial and droning Ambient music, all wrapped up in a grim shroud of morbid, blackened vibes and horror-movie atmospherics.

Whatever it is, though, it works. 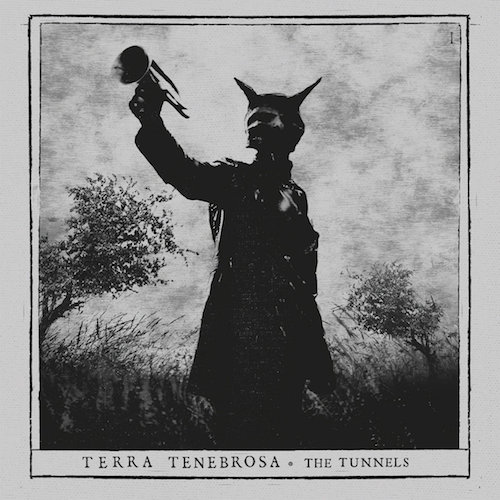 Eldritch opener “The Teranbos Prayer” is primarily made up of layers of creepy, dismal ambience and odd, off-kilter drum beats, punctuated here and there by sudden, seizure-like spasms of convulsing guitars and warped, sub-human vocals that croak and cough and hiss and howl in a manner seemingly designed purely to unsettle and unbalance the listener and shift them, violently, out of their comfort zone.

By way of contrast (for this album is all about contrast, chaos vs order, quiet vs loud, ghostly ambience vs jarring noise), “Probing the Abyss” comes across like an unholy hybrid of Altar of Plagues at their most pestilent and Neurosis at their most neurotic, all rattling. rumbling bass-lines, pulsing percussion, and thick, churning riffage, punctured and punctuated here and there by slithering threadworms of parasitic melody which dig themselves deep under your skin.

“The Mourning Stars” is a haunting odyssey of twisted sound and hallucinatory visions, maintaining a slow-burning delivery of shivering melody and hypnotic percussive patterns over the course of its ten-minute run-time, slowly growing in intensity and sheer, oppressive density as it builds towards a promised resolution that never comes.

After that, the tangled, industrialised riffing and garbled, babbling vocals of “The Arc of Descent” seem to offer a form of maddening cathartic release, the track feeling less like the product of a simple songwriting session, and more the result of some form of insane compulsion to purge the mind of all its darkest and most deviant impulses.

The opening bars of “Guiding the Mist / Terraforming” are so low, so quiet, as to almost be beyond the range of human hearing. You feel them in your bones more than you actually hear them. But they lay the groundwork for the track’s subsequent parade of odd, flickering melody lines and weirdly languid drum work in suitably unusual fashion, after which the (arguably) more conventional strains of “Through the Eyes of the Maninkari” – a roiling cauldron of mangled guitars, asphyxiating ambience, and croaking vocals practically dripping in oily malevolence – provide an almost infectiously catchy break from the (ab)norm(al).

The album ends with the grisly soundscapes of “The Tunnels”, an echoing procession of anxiety-inducing ambience which acts both as the perfect score for the listener’s climactic psychotic break, and an apt demonstration of Terra Tenebrosa’s utter rejection of normality and convention. 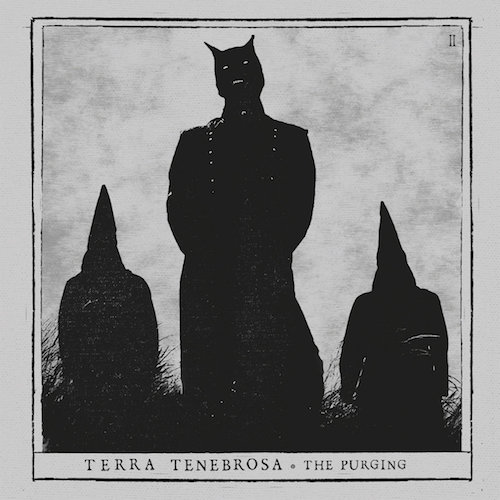 Whereas The Tunnels played its warped games with ambience and atmosphere to chilling effect, The Purging goes for an even more harrowing, industrial-tinged vibe reminiscent of The Work Which Transforms God, with the phantasmagorical introduction of “The Redeeming Teratoma” soon giving way to the seething dissonance and rippling melodicism of “The Compression Chamber”, whose mesmerizing, repetitive rhythms and disturbing, disembodied vocals can’t help but send a shiver down your spine.

Part blackened groove-machine, part doom-encrusted post-metal dirge, and part something… else… “Black Pearl in a Crystalline Shell” is an intense and off-kilter thrill-ride through a haunted house of driving riffs and manic drum work, topped off with the scarifying shrieks and howls and demented murmurings of faceless, nameless vocalist The Cuckoo.

“House of Flesh” is a claustrophobic collage of harsh noise and sinister atmospherics, all scattered shards and brutal angles, whose harsh, clanging riffs and deviant, dissonance-washed vocals paint a distressingly intimate portrait of fear and paranoia barely kept at bay, after which the bleak minimalism which introduces “The Nucleus Turbine” acts as something of a momentary reprieve.

But the sinewy flex and steady pulsing of the song’s bass and drums soon puts an end to all thoughts of calm and safety, chattering voices and smothering layers of carcinogenic ambience casting a pall of ominous dread across the track and leading the listener further down the rabbit hole towards the rapturous madness of “The Purging”, whose metallic method reminds me of the glorious ugliness of Lord Mantis circa-Death Mask, all lurching, heaving riffs, garbled, babbling vocals, and pounding, self-flagellating drum beats.

The Cult of Luna-esque “Terra Tenebrosa” is a massive, malevolent beast, make no mistake about it. The band lock themselves into a doom-laden groove for the entirety of the track’s four and a half minute run-time, never faltering, never deviating, and never letting up from their baleful blackened funeral march.

This is followed by the psycho-industrial interlude of “At the Foot of the Tree” and the bizarro Black Metal crawl of “Disintegration”, a seething plague-mass of diseased dissonance and viral atmospherics infected with a mix of hammering Post-Metal dynamics and acid-tasting Prog vibes, before the album finally draws to a close with the unearthly atmospheric outro of “The Reave”.

Our great and glorious leader himself was inspired to wax lyrical about the band’s third album when we were lucky enough to be chosen to premiere the record at our humble site back in June, and with good reason. From start to finish The Reverses is a mental and physical ordeal that spits in the face of the orthodox, and laughs manically at any suggestion of normality.

The hellish horroscape of “Makoria” serves to set the stage, though I doubt it will prepare you for the frenzied convulsions and grimy hooks of “Ghost at the End of the Rope”, a blackened behemoth of writhing, agitated guitars and bilious, rumbling bass, with every crooked nook and cranny bathed in a sickly run-off of industrial effluent and filth, or the demoniac anthem of “The End is Mine to Ride”, whose clockwork drum beats and scarred, scalding riffs convey an irresistible sense of impulsive urgency and hunger, as undeniably catchy as it is unflinchingly callous and cruelly creative.

As dense and as cold as a mortuary slab, “Marmorisation” recalls the sharpened angles and ash-shrouded atmospheres of Teethed Glory and Injury, albeit with a greater sense of inhuman dread and terrible promise, particularly when it comes to the sibilant, disquieting vocals which slither from the throat of band’s enigmatic, not entirely human, vocalist.

“Where Shadows Have Teeth” positively thrums with electricity and ill-intent, splintered slivers of cyanotic melody piercing the surface of the song’s blackened shell, exposing its inner workings in a clamoring clash of cogs and gears, meat and marrow, while the disconcerting, music-box malevolence of “Exuvia” eventually erupts into a much more doom-laden and menacing form while still maintaining the jittery, creep-show undercurrent of its opening bars.

The second half of the track sees a shift towards the same shadowy ambience which underpinned so much of The Tunnels, captivating in its eerie emptiness, before the song’s final transformation into a droning, groaning, surging stagger of sinister blackened doom that carries it into its own shallow grave.