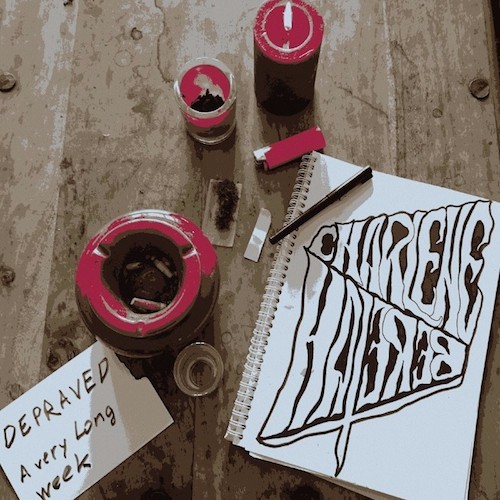 Let’s have a show of hands:  How many of you are fans of Stanley Kubrick’s film Full Metal Jacket? Well, quite a lot of you, though I can’t say I’m surprised. Now, raise your hand if you remember the name that Private Gomer Pyle gave his M14 rifle, the one he ultimately used as the instrument of his own destruction. Not quite as many… but those of you who remembered “Charlene” got it right.

The band whose debut EP we’re premiering today remember it, too — the name they chose for themselves, Charlene Beretah, is a tribute to that movie. And their music turns out to be just as dark, depraved, and depressive. In fact, the EP’s name is Depraved / A Very Long Week, which combines the names of the two songs you’ll find there. 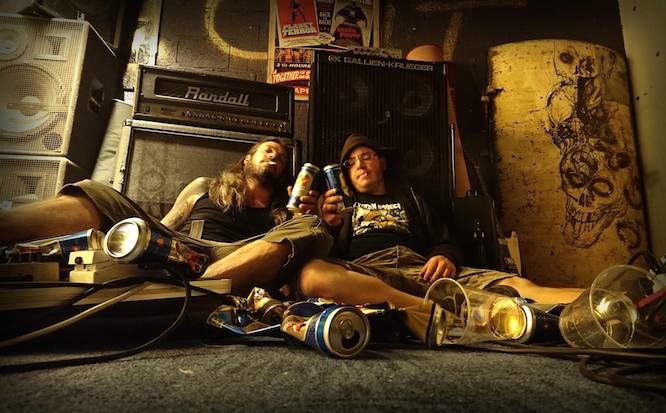 I’ve encountered some difficulty in trying to give you a verbal preview of the music. I can say that Charlene Beretah are a duo and perform their music using only guitar and drums. I can say that they have taken inspiration from elements of crust, black metal, and doom, and that both songs are longer than average. Beyond that, things get tricky.

You can get funky with “Depraved”, because that’s the way it begins, and your body will probably still want to keep moving even when the raw, sludge-weighted riffs and skull-cracking drums pick up the melody and the groove. But the music grows more gloomy and desolate, slowing and becoming unnerving as the wrenching shrieks of the vocalist claw at your brain. It spawns visions of someone trying to kneecap you with a crowbar while someone else is putting a needle loaded with hallucinogens into a vein. And then it turns into a Vesuvius of thundering drums, berserker riffing, and bursts of dissonance, culminating in the brutal, methodical driving of coffin nails into your brain pan. It’s an unusual combination of ingredients, but everything is poisonous.

“A Very Long Week” turns in a different direction at first — quieter, more eerie, yet ominous. But when the big, ropy riff comes in and the vocals begin to boil in agony, you know things aren’t going to get any brighter. In fact, things get even more demented and destructive as the instrumentals grow more frenzied and the vocals more irretrievably insane. There are still some quiet spaces ahead, but they don’t provide much of a reprieve, because the slow, catastrophic descent into hell eventually resumes as the corrosive, granite-heavy riffs pound and pound in a doom-drenched, nihilistic loop.

Depraved / A Very Long Week will be released on December 2 — tomorrow — by Division Records.