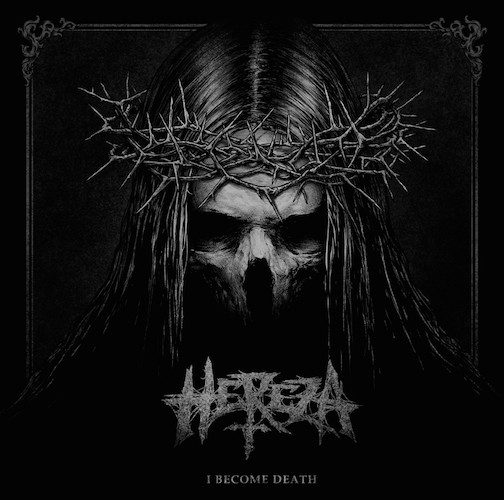 “Uništi, Pali, Ruši” are the Croatian words for “destroy, burn, tear it down”. Those words are also the title to a song and video we’re premiering today from an album called I Become Death by the Croatian band HerezA. This is HerezA’s second album, which follows their 2015 debut full-length, Misanthrope. The new one will be released in mid-February by the Polish extreme metal label Godz ov War Productions.

Although I’m spoiling a jolting surprise, I have to applaud the moment in the first few seconds of the video that syncs the first sound of the song with an image of artillery going off. And the sonic bombardment of the song doesn’t relent from that moment to the end.

What follows in the video is a montage of human violence on both small scales and large ones, interspersed with scenes of the band performing. Like the video, the music also has a destructive quality, delivering a death/punk barrage that pairs the thick, gut-busting tone of HM-2-powered riffs with d-beat rhythms and raw vitriol in the vocal department. It punches damned hard, damned fast, and then mixes in a neck-breaking groove that’s pure headbang fuel.

For further info about the release and the band, explore the following links. And after you check out the video we’re premiering, you can see and hear a second one for the song “Jebem Vas U Usta Ladna” from the same new album.