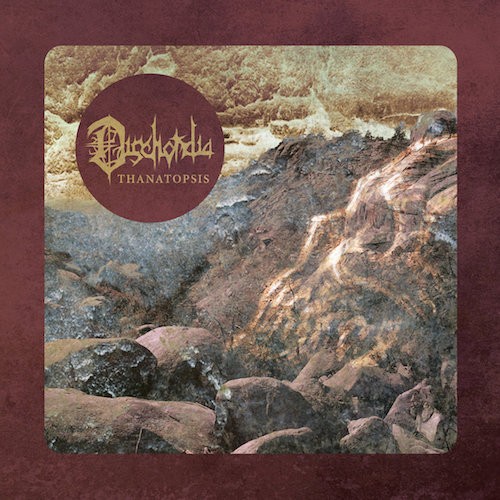 (Here’s Andy Synn’s review of the new album by Dischordia from Oklahoma City.)

As I’m currently sifting through all the various releases from this year’s crop, in preparation for my annual list-stravaganza, I’ve been able to pick out a few trends and patterns which have developed over the last twelve months.

One in particular has stood out – just how much good Death Metal, both from established names and underground upstarts, that’s been released in 2016.

And that includes Thanatopsis, the second album by Oklahoma triumvirate Dischordia. 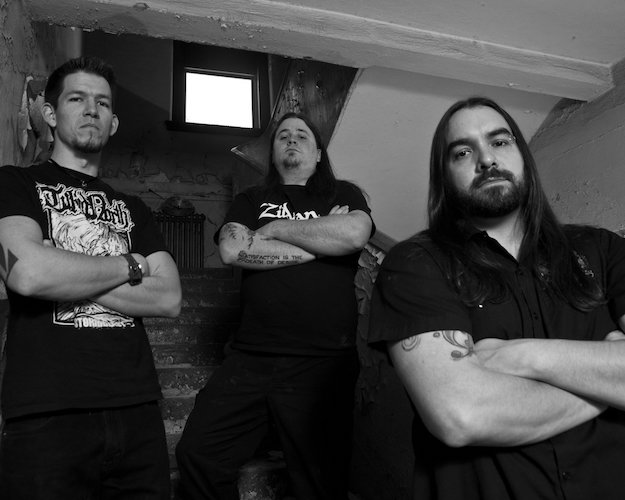 With a sound reminiscent of both the old (Spheres-era Pestilence and Obscura-period Gorguts), and the new (Decapitated, Meshuggah) schools of Death Metal, the nine tracks which make up Thanatopsis find the band flexing both their mental and physical muscles more than ever before, while also curtailing some of the unfocussed ambition of their previous album and redirecting it down a darker and more progressive pathway.

Song like the angular, atmospheric push-and-pull of “The Curator” and the lurching chug-and-churn of “22°” (complete with elaborate instrumental second half) are head and shoulders above anything the band have produced before, while the calculated chaos of “An Unlikely Story” and the torturous Prog/Tech of the aptly-named “Madness” are several shades darker, and several orders of magnitude heavier, than most of the band’s peers too.

“The River” starts out as an unsettling piece of jazzy instrumentalism, eventually erupting into a far more aggressive assault of twisted, tempestuous riffage and ear-scraping vocals, building to a gruesomely ugly penultimate pounding, before finally closing out in sublimely proggy style, easing the transition into the grating, teeth-grinding grooves of “The Road”, which goes through multiple metallic twists and spasming contortions over the course of its 05:39 run-time, before finally culminating in a mind-warping, acid-trip finale of ominous spoken vocals, whispering flute(!), and clashing, discordant guitars.

After this, the scorching sonic violence of “The Ruin” comes across as almost straightforward by comparison, although the track’s jerking, jarring rhythms, sudden, slamming twists, and injections of disharmonic, jazz-tinged ambience (not to mention a bevy of brutal, bowel-clenching vocals), make it far from an easy-listening experience… though it’s definitely an unforgettable one once it’s finally got its hooks into your cerebellum.

Ultimately, although this album isn’t perfect (the self-consciously “wacky” finale to the otherwise irresistible “The Traveller” being a key point of contention), it’s undoubtedly just that much more ambitious – both in scope and in execution – and that much more vicious, than 90% of everything else that you’re likely to have encountered this year.