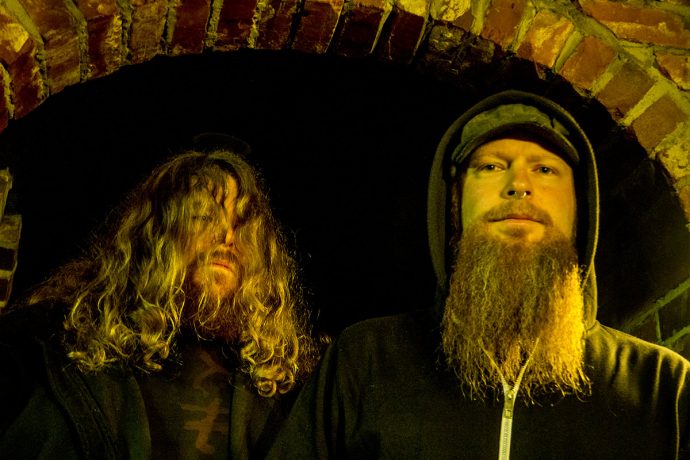 I already introduced NCS readers to this psychedelic mantra doom from Canada when I Hate Records released Zaum’s debut album Oracles. After two years of tours and recordings (which was also marked by Zaum’s participation in the Himalaya to Mesopotamia split album) the duo of Kyle McDonald (bass, synths, vocals) and Chris Lewis (drums, percussion) return with another full-length work named Eidolon. The band’s main songwriter Kyle shed some light on the result of his musical meditations.

Hi Kyle! As I Hate Records have released Zaum’s new album Eidolon, what do you feel considering this material? Is it relief? Is it excitement? Or maybe you listened to it too much during the recording sessions and are already tired of it?

We’re quite excited for people to sit with and experience Eidolon. It very much feels like a natural progression. We actually recorded bed tracks exactly a year before its release date. Afterwards, we went on tour and landed home around the start of December — and my intention was to hopefully have it completed by January. It ended up taking much longer than I had envisioned – wanting to be personally moved and mesmerized by the finished material, I really didn’t want to settle for anything at all. It wasn’t until around June that I was entirely done with it and sent it to I HATE to be pressed and gone and out of my hands. I was quite excited, but in a strange way I had this period of a couple weeks or so where I experienced this sense of loss due to the vast amount of alone time I spent with it. I sincerely love the result.

Your previous record is the split album with Shooting Guns, Himalaya to Mesopotamia, which was co-released by Pre-Rock Records and Superbob Records. And there’s just one Zaum song – “The Serpentshrine”. What is it for you? Just the track which was left after the Oracles session or something more?

We wrote and recorded “The Serpentshrine” after Oracles. The intention was to write a new record but we were offered the idea of a split by Sunmask, which we felt good about. While it was technically written and recorded after Oracles, in the “timeline” (if you will) of the lyrical content within the world we have created with ZAUM, “The Serpentshrine” is actually a prequel to what is happening and very much intertwines into both chapters Oracles and Eidolon. Despite the fact it is a split release, the cover very much depicts what is happening within the realm of ZAUM with relation to “The Serpentshrine”.

Oracles was recorded by you and Chris, but as for the Eidolon session you invited a bigger amount of guest musicians. Did you know from the start that you would need help from outside?

I recorded/mixed/mastered Oracles entirely by myself with zero outside help in my recording space in my home. With Eidolon, however, we decided to record our bed tracks at Pumpk’n Patch Studios in a small village called Memramcook in Canada by an old friend of ours, Danny Bourgeois. The reason I wanted to do so is due to Danny’s hand and ear with respect to drum tones and tuning — he is a total master at his craft, and I felt this would give the album a punchier, cleaner, and more polished drum sound than with Oracles, and certainly with the even more primitive “Serpentshrine”. The rest of the album I engineered, mixed, and mastered in his incredible studio, which was a rad experience.

With respect to guest musicians, I knew I wanted to bring some more organic sounds into Eidolon. For example we wanted to have some very low organic-sounding cello drones in the textural backing tracks – and since I don’t play the cello, we had a friend of ours do so.

Well, it is simplification, but it looks like you were writing and polishing these two new songs for almost two years. How long did you really work over this album?

The writing process is actually ultra-primitive for us. The reason it takes us longer, is we write it as we record it. The idea is to keep the writing as under-produced and primitive as possible without being jammy. In other words, everything you hear on our recordings for the most part is the first written complete performance of it. We don’t rehearse the material thoroughly and have completely written songs before we record – we do so with very vague/rough ideas. We realize we have a very unconventional way of how we work – and we like it – I think it contributes to what ZAUM is. So the extra time it took was simply because I hadn’t finished writing vocals/lyrics yet for example, etc.

As the album consists of only two songs, can you say that you had enough space to express yourself through it?

Absolutely, what took place in Chapter II: “Eidolon” – is precisely what did.

The album is named Eidolon, and this word has a few meanings; for example, it is a spirit-image of a living or dead person in Greek philosophy. So which meaning did you put into it?

An apparition or spirit-image of something and/or someone. 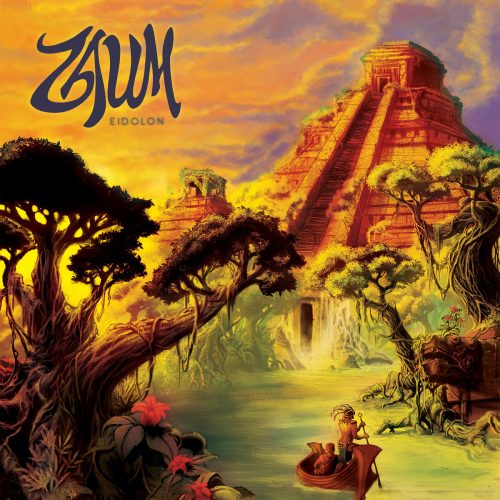 Does the artwork have a connection with the songs’ lyrics? Zaum was known as a “Mesopotamian” doom band, and you have turned to Mesoamerican imagery, though in the first song “Influence of the Magi” you tell about the “wealth of Assyria”. So why did you choose these particular landscapes instead of old good dunes?

The artwork definitely intertwines for sure. The reference of the “wealth of Assyria” isn’t taking place in that exact time and physical location as in Eidolon – it’s a small part of a greater vision. It really wasn’t a choice on my part as much as it just was a reality. In fact – as strange as I’m sure this will sound – it’s almost as though I had no choice at all. The lyrics are written whilst in a (NON-drug induced) barely conscious meditative/channeled state.

Is “Influence of the Magi” dedicated to any certain historical figure? What is the song about?

I can’t really say specifics, though I can tell you it has nothing to do with any historical figure. While I sometimes can provide the odd glimmer of perspective, I’m not fond of detailing what things are actually about, as I feel that is the listeners’ prerogative – that’s part of what the experience is. The truth is, I’m not entirely certain myself – I realize and experience more and more everyday.

After the release of Oracles Zaum was touring in Europe. What was your overall experience of this pilgrimage? What were the highlights of that tour?

Europe is so refreshing and just really perfect in an artistic sense. In general terms, in contrast to North Americans, the general public in Europe are simply hungrier for new art and experiences and are far more open-minded. The fans, bands, promoters, and actual places have all been a part of a really mind-altering, life-changing experience for us. We did three full European tours during Oracles – a five-week tour on our own, a three-week tour with our German brothers in Earth Ship, and a 2.5 week tour with our Swedish brothers in Galvano and Snailking. All three tours have had their own highlights and have ranged geographically from Norway to Romania, we have met some of the best and closest friends we have in life – and just overall can’t say enough about our experience with Europe. Eastern Europe in general was a surprise for us, the passion and warm reception has been shocking for us.

Do you plan to support the release of Eidolon with touring too?

We just finished a near six-week tour of Europe, and will be back in April for a few weeks in the UK and France. We should have some Canadian dates interlaced throughout, and will likely be back overseas as well in the fall!

How do you see Zaum’s perspectives? Do you think that you could go away from doom music at all and plunge deeper into ethnic?

I suppose anything could happen, each album is its own entity and tells its own “story”. Although it will somewhat interconnect with the others in some way, musically and message-wise it could be entirely different. Don’t be surprised to see us stray in different directions, but I think in one way or another we will always encompass the ZAUM sound people are familiar with, whether a future record is much more or much less “heavy” or “doomy”.

Thanks for the thoughtful interview and we hope you enjoy Eidolon. People can order their copy HERE:

One Response to “AN NCS INTERVIEW: ZAUM (KYLE MCDONALD)”