For this Sunday’s Rearview Mirror post I’m reverting to the original concept for the series, and just posting one good old song.

The song is “Life Is A Coma” by the super-group Demiurg off their last album, 2010’s Slakthus Gamleby. And yes, Demiurg are a straight-up super-group, with Rogga Johansson as guitarist and vocalist, Dan Swanö as lead guitarist and keyboardist,  Ed Warby hitting the skins and vocalizing, and Johan Berglund on bass. Oh, and let’s not forget Marjan Welman from the Dutch goth metal band Autumn, whose vocals on this song are one of the twists that make it so stupendous. 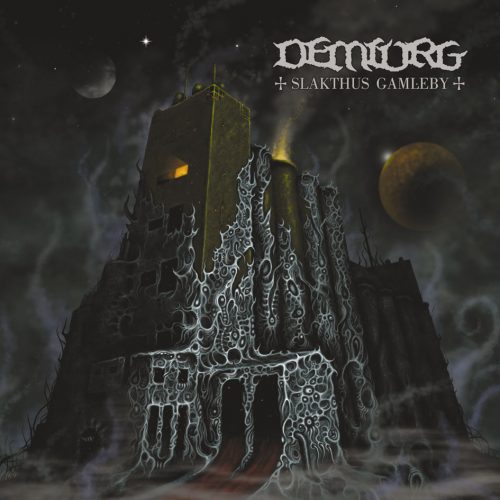 Before writing this post I hadn’t tried to understand the title of this album, but now I’ve done some looking. The Font of All Human Knowledge reveals that “Gamleby is the second largest locality situated in Västervik Municipality, Kalmar County, Sweden with 2,775 inhabitants in 2010″ — and it’s where Rogga Johansson lives. Google Translate tells me that “Slakthus” is Swedish for “slaughterhouse”. And now you know what I know.

The entire album is a gem, but we’re only talking about “Life Is A Coma” this morning. There is just no stopping that opening chug-a-thon riff — what great guitar tone it has! — and you can feel the rhythm section deep in your intestines. The leads are equally magnetic throughout, but perhaps especially in the slow mid-section, which is when Marjan Welman comes in to put a very different stylistic spin on the music. And Rogga sounds like an absolute beast.

Okay, now please follow these directions: Bake a birthday cake for yourself; stick the appropriate number of candles in it (or if you’re in the vicinity of my age, just put one in there for symbolic purposes); wish for a new Demiurg album; and then blow out the candle(s). Thank you.

6 Responses to “THE REARVIEW MIRROR (DEMIURG)”