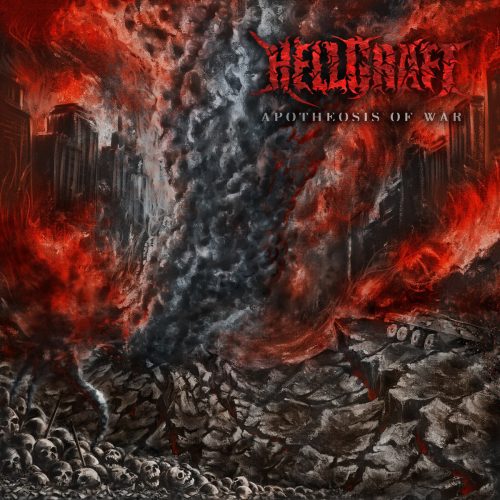 “Apotheosis” is one of those words that I would usually just skate by when I saw it, thinking I had a vague understanding of its meaning but never bothering to really learn the precise meaning. And then, after listening to the new Hellcraft album, Apotheosis of War, I had to find out exactly what the word meant. The dictionary defines it as “elevation to divine status”, and that made so much sense in the case of this album — because it’s undeniably and almost unrelentingly warlike, and it’s also divine.

Apotheosis of War is this Ukrainian death metal band’s third album and their first one since 2012. It will be released on January 13, and at the end of this post you’ll find our premiere of a full album stream. But first, I have to tell you more about how great this album is, because if I don’t, I might rupture some possibly significant internal organ. 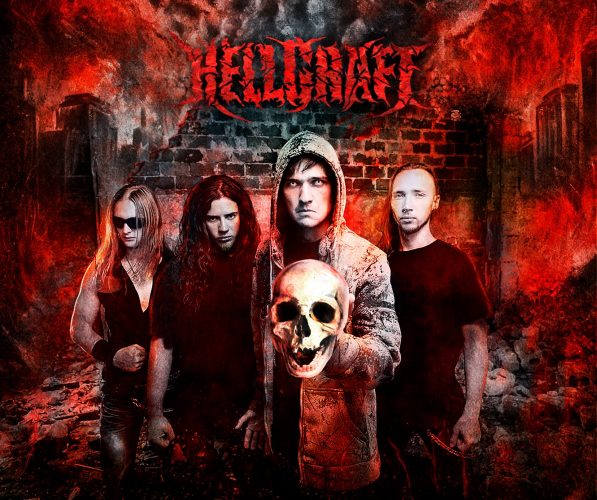 The basic ingredients of the music are easy enough to identify, but the electrifying impact of their combined force is difficult to capture in mere words.

Speed is one of those ingredients. Once you get past the spectral intro to the first track, it’s a high-octane, pulse-pounding, thrash-paced rush straight through to the final track, which is grim, gloomy, and mid-paced in part — and frenzied and ruthless the rest of the time. Basically, you’re in the midst of an active war zone in this Apotheosis of War.

Another common ingredient of everything on the album is the staggering power of the sound. It hits like a heavy artillery barrage, or a howling hurricane. The bass and drum sound on the album alone is so potent, and the performances so galvanizing, that the rhythm section alone could crank the spigot on your adrenal glands wide open all by themselves. And yet the production achieves this megawatt impact while at the same time providing clarity and separation in the mix, achieving a sharp vibrancy as well as brute force trauma.

All of the songs also feature a common combination of riffing styles, to which the rhythm section is acutely attuned. About half the time, Hellcraft are operating like a massive pile-driver, inflicting hammering grooves that you’d love to bang your head to, if your head could move that fast and if it weren’t being fragmented by those grooves. And the other half of the time, the riffing turns tremolo, operating like a deep, vibrating bone saw in a human slaughterhouse. I’m exaggerating a little — there are more riffing styles to be found on the album, and the lead guitar lines are bold and vivid.

Here’s something I’m not exaggerating: This is an album worth hearing just for the guitar solos. There’s at least one and often two in each song. Sometimes when you hear a guitar solo in a thrash or death metal song, you come away thinking, “Well, I guess they felt that was obligatory — but what did it really add?” In the case of this album, you won’t be asking that question. The solos give already-electrifying music an even greater surge of exhilaration, whether the solos are sinuous or incendiary (and they’re both of those things, and more).

Another basic ingredient, but a vital one, are the vocals. On an album about the deification of war, the vocals had damned well better be rampant displays of blood-lusting barbarity — and they are. The deep growls are cold and carnivorous, but monotony never sets in because Hellcraft’s frontman sends them surging into wild howls that match the most cathartic moments of each song. I’ll also add that on the title track, Hellcraft benefit from a guest vocal appearance by Adrie Kloosterwaard from the masterful Dutch death metal band Sinister.

So, what you have is a mix of high-octane propulsiveness, skull-fracturing hammer blows, bone-saw grinding, and blood-lusting vocal rage — all delivered with megaton explosiveness and top-shelf technical skill. Yet I still haven’t come to the final key ingredient, and that’s Hellcraft’s sense of melody. As warlike as the songs are, they have melodic hooks in them. It’s death metal with melody — but it’s not melodic death metal. That’s a distinction worth exploring in depth some day, but here it’s perhaps enough to say that the melodic currents in these songs are so morbidly sinister that Apotheosis of War definitely remains a death metal album. But a really catchy, and often magnificent, one.

Some of the most interesting and distinctive melodies appear in the album’s final track, which sounds as if keyboards are involved. It’s also unusual in other ways, as I’ve mentioned before. But if I had to pick my favorite track, and the one I’d recommend if you only want to taste-test one song before diving all the way in, it would be Track No. 2 — the title track. I’ve already added it to my fledgling list of candidates for 2017’s “Most Infectious Song” list. If you dig that song, you’re going to revel in the rest of the album, which I think is a great trip all the way through.

As noted at the outset, Apotheosis of War will be jointly released on January 13 by Symbol of Domination Productions (Belarus), More Hate Productions (Russia), and Murdher Records (Italy). It will also be distributed in the U.S. by Sevared Records. To pre-order it on CD or digitally, visit this page:

One Response to “AN NCS ALBUM PREMIERE (AND A REVIEW): HELLCRAFT — “APOTHEOSIS OF WAR””