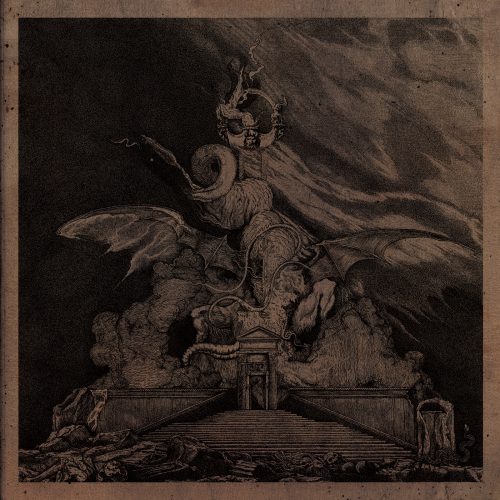 Within Temple of the Adversarial Fire, the Norwegian conjurors in Shaarimoth open a Pandora’s box of wicked marvels, delivering such a mind-bending display of esoteric extravagance that the album threatens to eclipse most everything else released in the early months of this new year. It will be disseminated by W.T.C. Productions on January 13, and today we’re privileged to bring you the premiere stream of the whole thing, in all its twisted magnificence.

More than a decade has passed since Shaarimoth’s last emergence, with 2005’s Current 11. In that time, Shaarimoth have not lost the spiritual sources of their musical inspiration; the fires of the Adversary unmistakably fuel the music. Through the course of all 11 tracks, it’s a wild and chaotic interdimensional trip, a fusion of death and black metal with a pronounced experimental bent and an exotic, esoteric atmosphere, and it’s so brazenly and exuberantly creative that it’s likely to leave you wide-eyed and gasping by the time you reach the end. 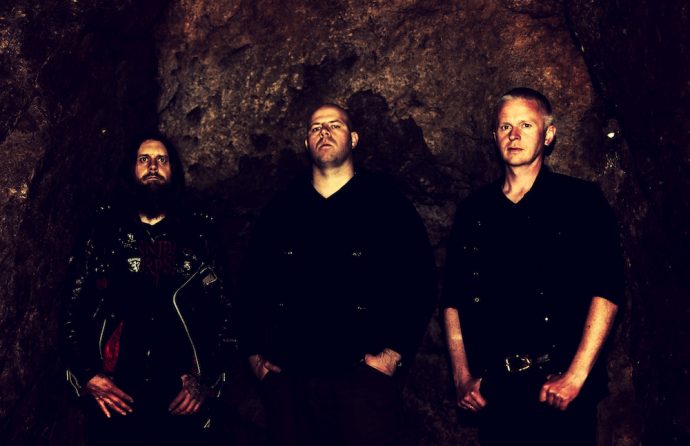 The album is produced in a way that provides both clarity and striking power. The enormity of the drum and bass sound, in particular, when combined with the ingeniously inventive progressions and rapidly changing tempos and time signatures, gives the music a bold and bombastic quality. But the instrumental virtuosity of the rhythm section is matched by the head-spinning pyrotechnics of the guitarist and the incorporation of a rich array of tones and effects.

There is considerable dissonance in the music’s twisted melodies, though the riffs are just as likely to plunder your head with lashing and slashing as the arpeggios are to spin your neurons into knots.

It is indeed a macabre and murderous trip, one filled with fireworks and psychoactive vapors and the sonic acrobatics of an infernal circus. The songs incorporate bizarre fanfares, like the soundtrack to a hellish coronation, but they’re just as likely to explode in a feeding frenzy or wander off into a nightmarish carnival showing you one deranged and grotesque side-show after another along the midway.

The vocals are equally untamed and ignited with passion, and almost as wide-ranging as the constantly surprising instrumental music, moving from harsh growls to gritty proclamations, from solemn chants to inflamed yells — and even some clean singing in the final track.

Don’t think from what you’ve read so far that the album is without form or that it ever loses its vice-like grip on the senses — it doesn’t. Just when you think you’re on a maniacal ride that’s going to jump the rails and careen off into an extravagant pile-up, Shaarimoth yank you back with massive, head-hammering grooves (“Harba di Ashm’dai”, by way of example, is a vicious head-crusher) or segue into passages of strange, dreamlike beauty (as they do most notably in “The Fires of Molok” and “Point of Egress”).

This is a dazzling work of devilish art. It snares you from the first listen, but is so intricate and kaleidoscopic that further listening reveals further dimensions. It’s likely to appeal to an array of fans, from those who appreciate inventive, technically inclined death metal along the lines of Gorguts to devotees of the most avant garde forms of occult black metal.

9 Responses to “AN NCS ALBUM PREMIERE (AND A REVIEW): SHAARIMOTH — “TEMPLE OF THE ADVERSARIAL FIRE””