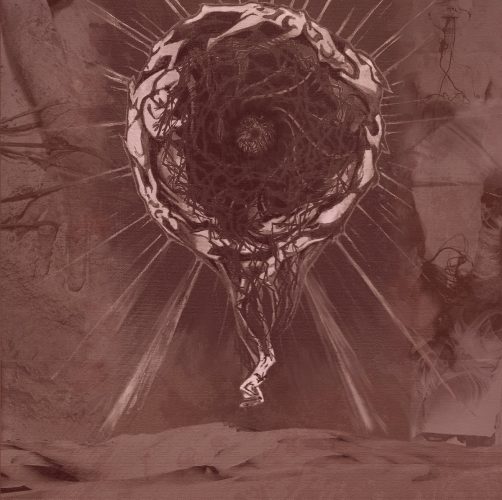 Try as I might, it’s just not possible to catch every new gem that dropped in 2016, especially among releases that dropped in December, such as the Youdash which Islander covered and I recently covered myself elsewhere. But, since Youdash has been covered here, let’s focus instead on the Belarus black metal band Leprous Vortex Sun, who dropped a terrifying new album on December 21st. Thankfully, my fellow geeky friends often tip me off to stuff like this, so thank you Amir for sharing this with me!

I had to translate the album title (По направлению к Солнцу, плавящему изнутри кости), as it’s originally written in the band’s native tongue using the Russian Cyrillic alphabet, if I’m not mistaken. Roughly translated, what it comes out to in English is: Towards the sun, melting the bones inside. Couple that creepy title with the freakish artwork, and the vibe is set for something grim and otherworldly before you even hit play.

Once you do, it’s a veritable carnival of feverish horror at every turn, mainly consisting of lengthy lumbering songs punctuated by intense chaotic shifts. It poisons you with skin-crawling dissonance masked as “riffs” amidst waves of bestial hoarse screams and growls, while the drumming alternates between a lurch and a full-on weaponised full-throttle assault on a whim. To call this fucked up and deranged-sounding is almost an understatement.

Listening to Towards the sun, melting the bones inside often reminds of Aevangelist and Deathspell Omega with a pinch of Abigor, but it’s the unique style of songwriting the band is deeply invested in that’s completely their own thing. Dirge-like yet often blazing fast, miserable sounding yet with an exotic edge, Leprous Vortex Sun are clearly a talented band teetering on the edge of their own collapse and laughing at the prospect of causing their own self-implosion.

I like to imagine this album as a musical companion to Dante’s Inferno; each song feels like a different level of hell, with new madness and fresh pain to explore the deeper you go. Music this good shouldn’t be swept under the rug as last year’s leftovers, so be sure to check out Towards the sun, melting the bones inside and give it a proper chance.