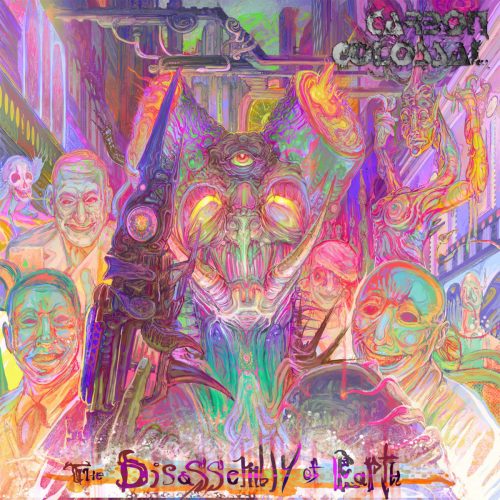 (This is Part 1 of a 3-part series written by Austin Weber about noteworthy January releases and a few from the end of last year.)

CARBON COLOSSAL – The Disassembly of Earth

Recently a friend shared Carbon Colossal with me, and I’m really glad he did. Longtime NCS fans may recognize the distinctive artwork as familiar, since it’s done by a perennial favorite here, Luca Carey. Using his bright and extremely psychedelic art for such a dark release works quite well in a fucked-up kind of way. The Disassembly of Earth is some sort of technical doom from hell, gone a death-metal-infused path, with fleeting blasts of black metal peppered in between all that.

Carbon Colossal may be only a duo but they make a lot of potent noise, the three songs here forming an all-around vicious and ultra dissonant heavy machine the likes of which show a ton of promise on this band’s debut release. 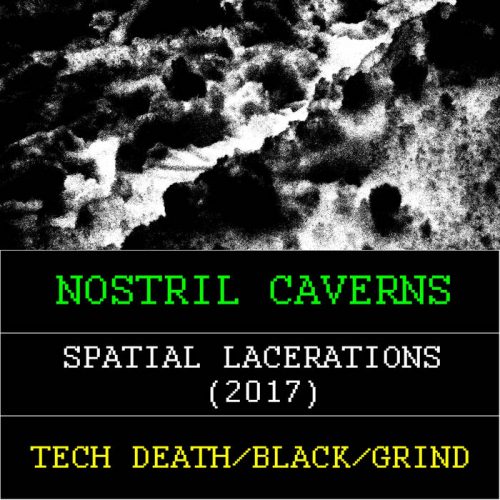 By now, I’d expect some of you have caught wind of Nostril Caverns, the one-man Canadian tech/black/math/prog/experimental/grind/whatever outfit where everything is performed by the multi-talented musician Chris Balch. We’ve been covering Nostril Caverns here at NCS for the last few years, and 2016 in particular was a big year for the project, seeing the release of two intense albums. The first was Repressed Memory Games, a more prog-focused effort overall with lengthy complex songs. The second was Self-Inflicted Memory Loss, a bizarre 99-song tech-grind experience that fucking ruled.

Barely skipping a beat, Nostril Caverns just dropped a new full-length a few days ago that’s called Spatial Lacerations. It’s largely in the same vein of the material found on his 2016 tech-grind release, as this too is 99 songs of insane technical black/death grind with mathcore and prog elements. Yet it’s a bit different too, as this time there’s no samples before each song, allowing for more time to develop ideas on each swift cut.

Second, there are 9 keyboard-focused tracks, from”Phonetic Thought 1” through “Phonetic Thought 9”, interspersed through the record. These interludes help break up the album nicely and display a different, almost ethereal and sometimes haunting film-score sound, that’s a big contrast with the overall batshit-crazy overload of high-flying guitar pyrotechnics, unhinged vocals, and copious amounts of blastbeats the record is largely built on.

Much like his grind release last year, I suspect few if any other grind releases in 2017 can match what Spatial Lacerations has to offer musically. Advanced and complex grindcore such as this is operating at a far higher artistic level than the majority of grindcore that’s out there.

If you care to envision what Maruta mixed with Discordance Axis, Psyopus, and Dendritic Arbor might sound like, the imagined product of that combination is a solid point of reference for what Spatial Lacerations offers in spades. More people need to check out Nostril Caverns; this project continues to amaze me year after year.