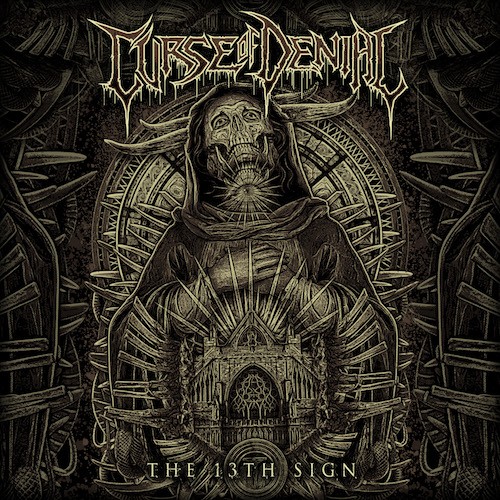 Cleveland’s Curse of Denial are a new band, but this isn’t the first rodeo for the people in the band. The line-up includes former members of Descend (whose roots go back to the ’90s) as well as vocalist Rob Molzan (also a member of From the Depths, whose tenure with Decrepit goes back to that same decade). Their debut album The 13th Sign reflects all that experience, and includes a slew of notable guest appearances that bring even more veteran seasoning to the carnage of this battleground. The album will be released on February 3 by Redefining Darkness Records, and today we have an excerpt to whet your appetite — an unusual lyric video for “The Tower of Silence“.

Apart from the sure-handedness that comes from experience, one other thing will become evident as soon as you hear this new song: The music isn’t easily pigeonholed, instead reflecting a range of extreme metal influences that have been combined in electrifying fashion. 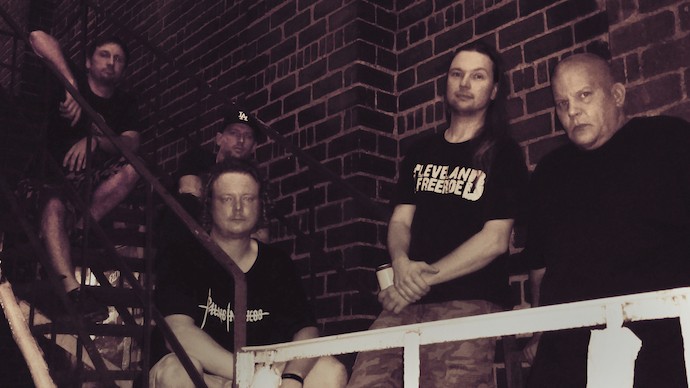 I have to tell you something else by way of introduction, because it was a weird and wondrous coincidence: I listened to the song before I watched the video, because at least for the first experience I didn’t want to be distracted by the words or whatever visuals might be accompanying them. And this is what I wrote — when you see the video, you’ll understand my own surprise when I saw it.

While Curse of Denial bill themselves as a death metal band, “Tower of Darkness” seems more like a hybrid of black and death metal. Launched by a vibrant drum roll, it begins as a brooding, mid-paced night-march through a dark flowing tide, with the grim atmosphere of the music pierced by a flickering solo that illuminates the song like a lightning show in a massive thunderhead, and by throat-clawing goblin snarls.

But then, almost halfway through, a pneumatic bass solo forms a bridge to the launching of a juggernaut — a faster paced charge that’s more volcanic and barbarous. The vocals change as well, dropping into the gruff growls of death metal. But that bleak yet alluring melody from the beginning reappears at the end, sinking its snaking roots even further into your head.

Okay, now that you’ve read that, keep it in mind when you watch the video — which does a superb job matching the music to visual expression, with the lyrics themselves presented in a way that doesn’t detract from the power of the imagery (though the lyrics are well worth reading).

We asked the band for a comment about the video, and here’s what vocalist Rob Molzan told us:

“In this video I wanted to convey the beauty of destruction with the beauty of the song writing. The lyrics deal with the confusion of death here on earth and beyond, being that only the dead know what lies ahead for us. I also wanted to give the viewer something that may appeal to the visual senses as well as the auditory.”

As far as I’m concerned, he succeeded, big time.

I mentioned that the album includes guest appearances, and here’s a list of those:

The very cool album cover was created by Remy from Headsplit Design.

To check out one more song from the album — “The Day That the Sun Failed To Rise” — we’ve got the Bandcamp player for it below this new one.

One Response to “AN NCS VIDEO PREMIERE: CURSE OF DENIAL — “THE TOWER OF SILENCE””