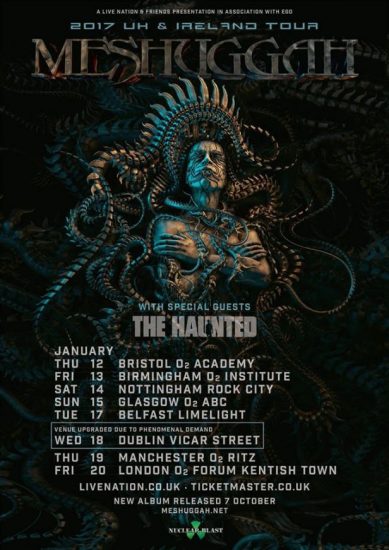 (The UK-Ireland Tour of Meshuggah and The Haunted rolled through Nottingham, England, on the night of January 14, 2017, and our man Andy Synn was there — and files this report, with video evidence.)

Why do we go see live music? That’s a question which I’ve been pondering, cogitating on, and generally wondering about for many, many years.

After all, in one sense all that’s going to happen is that we’re going to hear some songs we already know, played with (potentially) more mistakes, in a venue where the sound quality is always a question mark, whilst packed in cheek-to-jowl with a plethora of ne’er-do-wells of dubious morality and questionable personal hygiene.

But, often when we go to see a band and they play TOO perfectly… the reaction is generally just as bad as if they’d played terribly. So it’s clearly not just a case of going to see a band to watch them reproduce the music from their albums wholesale.

I don’t have an answer to that question above by the way, it’s just something that’s been on my mind for a while. If you think about it, the whole process of going to see live music is a little odd after all.

Though I suppose if you think about anything too much it starts to seem a little weird.

Whatever the answer is (if, indeed, there is one) I still love going to see bands play live. There’s a certain rush, a sense of excitement to it, that’s hard for me to find elsewhere.

Of course not every band is worth it. Not every band gives me that same rush. And even some of those who do can be very inconsistent. 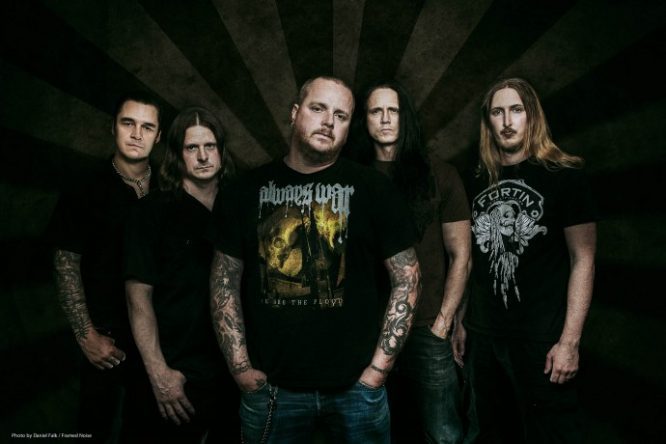 The Haunted used to be one of those bands. It seemed like every time I saw them live at least one member of the group didn’t look like they were enjoying themselves. No matter what line-up the band had at the time, it always seemed like all five members were never quite on the same page.

But one thing which surprised me at MDF last year (and which I commented on at the time) was just how much fun it seemed The Haunted were having. They seemed much happier and more relaxed than I’d ever seen them before. And Saturday night only served to reinforce that perception.

Kicking off with the one-two punch of “No Compromise” and “99”, you could tell that the band’s current line-up – mainstays Jonas Björler and Patrick Jensen now (re)joined by ex-drummer and ex-vocalist Adrian Erlandsson and Marco Aro (respectively) and “new” guitarist Ola Englund – feel incredibly comfortable, and incredibly confident, as a unit, with Aro in particular coming across like a new man when compared to his previous tenure with the group, bounding around (and off) the stage with the animated energy of a man half his age.

Tonight’s biggest surprise however, for me at least, was just how much Dolving-era material was aired, with the majority of the set seemingly pulling from rEvolvEr and The Dead Eye, and only a few cursory numbers (“DOA”, “Time (Will Not Heal)”, the requisite run-through of “Bury Your Dead”) culled from Aro’s period at the head of the band.

Just as surprisingly, though, was the fact that Aro absolutely nailed these tracks. Whereas previously he’s seemed a little grudging when performing them, now it seems like he’s dead set on making these songs his own, shifting his delivery slightly to accommodate the slightly different sonic approach taken by numbers like “The Flood” and “The Medication”, and really getting into the spirit with the clean vocals, culminating in a truly fantastic (and unexpected) run-through of “The Guilt Trip”.

Finishing with, what else, a quick blast of “Hate Song”, tonight’s performance was definitely one of the best I’ve ever seen from the band. If they can keep this up, and hold it together for a while, they might finally… finally… recapture their earlier momentum.

Still no “Trendkiller” though. Maybe next time. 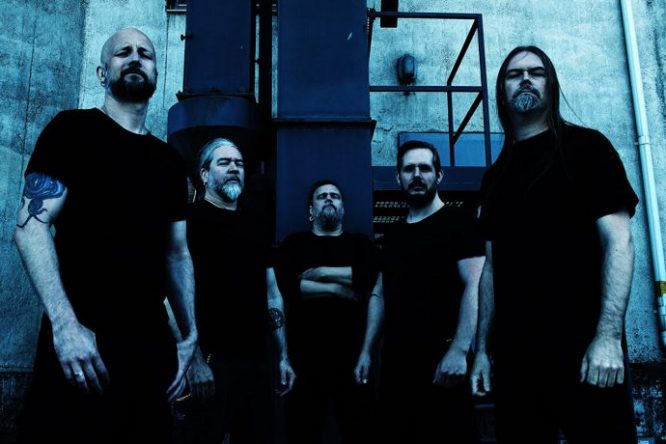 I honestly sometimes wonder if Meshuggah are aware of just how seriously they outclass pretty much every band they play with.

Now I’m not talking about The Haunted, who put in one hell of a performance tonight, or High On Fire, or Car Bomb, or Decapitated – or any of the band’s hand-picked support acts from recent years – but when I see their name on a festival bill up alongside some of the lowest-common-denominator crap that qualifies as today’s mainstream Rock/Metal scene, I have to wonder how the band resist the urge to swagger around, kicking sand in people’s faces, swiping beers and stealing people’s girlfriends.

They really are just that much better… and they HAVE to know it, right?

But whether they know it or not, whether they even care or not, Meshuggah pretty much prove their superiority every single time they step out onto the stage. And tonight was no exception.

As gloriously and flabbergastingly tight as ever, and still heavier than a very heavy thing that’s spent the last six months binge-eating granite, Messrs Kidman, Thordendal, Haake, Hagström, and Lövgren together make up one of the most intense and overpowering live units on the planet, and tonight’s set of complex crushers like “Clockworks”, “Perpetual Black Second”, and “The Hurt That Finds You First” only served up more evidence of the band’s punishing prowess.

They’re also one of the few bands (Tool would be another) who are capable of captivating an audience without doing much in the way of moving about or overtly “performing” for the crowd.

The dazzling light show certainly helps matters of course, sequenced as it is to match every spine-mangling spasm and pneumatic punch of the music with a complementary assault on your visual field, but it’s more than just a flood of light and sound. You can practically feel the pressure building as the band play, the sheer physical toil and strain it takes to hold it all together, and the primal, unflinching focus and discipline it requires to maintain order on the very edge of chaos.

The band may not be the most active onstage, they may not be doing spin kicks or jumping off amps… or generally acting like Ritalin-deficient toddlers… but the sheer effort they put into the music, every taut, time-warping riff and furious, fractal drum pattern, is a sight to behold in itself.

There will always be those who judge Meshuggah for being too cold, too clinical, too mathematical in their performance… that’s their prerogative. But they’ll never know what they’re missing.